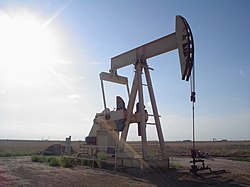 Pumpjack on an oil well in Texas

The extraction of petroleum is the process by which usable petroleum is drawn out from beneath the earth's surface location.

Geologists and geophysicists use seismic surveys to search for geological structures that may form oil reservoirs. The "classic" method includes making an underground explosion nearby and observing the seismic response, which provides information about the geological structures underground. However, "passive" methods that extract information from naturally occurring seismic waves are also used.

Other instruments such as gravimeters and magnetometers are also used in the search for petroleum. Extracting crude oil normally starts with drilling wells into an underground reservoir. When an oil well has been tapped, a geologist (known on the rig as the "mudlogger") will note its presence.

Historically in the United States, in some oil fields the oil rose naturally to the surface, but most of these fields have long since been used up, except in parts of Alaska. Often many wells (called multilateral wells) are drilled into the same reservoir, to an economically viable extraction rate. Some wells (secondary wells) may pump water, steam, acids or various gas mixtures into the reservoir to raise or maintain the reservoir pressure and economical extraction rate.

The oil well is created by drilling a long hole into the earth with an oil rig. A steel pipe (casing) is placed in the hole, to provide structural integrity to the newly drilled well bore. Holes are then made in the base of the well to enable oil to pass into the bore. Finally, a collection of valves called a "Christmas tree" is fitted to the top; the valves regulate pressures and control flow. The drilling process comes under "upstream", one of the three main services in the oil industry, along with mid-stream and downstream.

During the primary recovery stage, reservoir drive comes from a number of natural mechanisms. These include: natural water displacing oil downward into the well, expansion of the associated petroleum gas at the top of the reservoir, expansion of the associated gas initially dissolved in the crude oil, and gravity drainage resulting from the movement of oil within the reservoir from the upper to the lower parts where the wells are located. Recovery factor during the primary recovery stage is typically 5-15%.

While the underground pressure in the oil reservoir is sufficient to force the oil (along with some associated gas) to the surface, all that is necessary is to place a complex arrangement of valves (the Christmas tree) on the well head to connect the well to a pipeline network for storage and processing. Sometimes pumps, such as beam pumps and electrical submersible pumps (ESPs), are used to bring the oil to the surface; these are known as artificial lifting mechanisms.

Over the lifetime of a well, the pressure falls. At some point there is insufficient underground pressure to force the oil to the surface. After natural reservoir drive diminishes, secondary recovery methods are applied. These rely on supplying external energy to the reservoir by injecting fluids to increase reservoir pressure, hence increasing or replacing the natural reservoir drive with an artificial drive. Secondary recovery techniques increase the reservoir's pressure by water injection, gas reinjection and gas lift. Gas reinjection and lift each use associated gas, carbon dioxide or some other inert gas to reduce the density of the oil-gas mixture, and thus improve its mobility. The typical recovery factor from water-flood operations is about 30%, depending on the properties of the oil and the characteristics of the reservoir rock. On average, the recovery factor after primary and secondary oil recovery operations is between 35 and 45%. 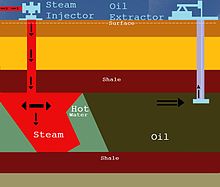 Steam is injected into many oil fields where the oil is thicker and heavier than normal crude oil.

Enhanced, or tertiary oil recovery methods, increase the mobility of the oil in order to increase extraction.

Thermally enhanced oil recovery methods (TEOR) are tertiary recovery techniques that heat the oil, reducing its viscosity and making it easier to extract. Steam injection is the most common form of TEOR, and it is often done with a cogeneration plant. This type of cogeneration plant uses a gas turbine to generate electricity, and the waste heat is used to produce steam, which is then injected into the reservoir. This form of recovery is used extensively to increase oil extraction in the San Joaquin Valley, which yields a very heavy oil, yet accounts for ten percent of the United States' oil extraction. Fire flooding (In-situ burning) is another form of TEOR, but instead of steam, some of the oil is burned to heat the surrounding oil.

Occasionally, surfactants (detergents) are injected to alter the surface tension between the water and the oil in the reservoir, mobilizing oil which would otherwise remain in the reservoir as residual oil.

Another method to reduce viscosity is carbon dioxide flooding.

Tertiary recovery allows another 5% to 15% of the reservoir's oil to be recovered. In some California heavy oil fields, steam injection has doubled or even tripled the oil reserves and ultimate oil recovery. For example, see Midway-Sunset Oil Field, California's largest oilfield.

Tertiary recovery begins when secondary oil recovery is not enough to continue adequate extraction, but only when the oil can still be extracted profitably. This depends on the cost of the extraction method and the current price of crude oil. When prices are high, previously unprofitable wells are brought back into use, and when they are low, extraction is curtailed.

The use of microbial treatments is another tertiary recovery method. Special blends of the microbes are used to treat and break down the hydrocarbon chain in oil, making the oil easy to recover. It is also more economical versus other conventional methods. In some states such as Texas, there are tax incentives for using these microbes in what is called a secondary tertiary recovery. Very few companies supply these.

The amount of oil that is recoverable is determined by a number of factors, including the permeability of the rock, the strength of natural drives (the associated gas present, pressure from adjacent water or gravity), porosity of the reservoir rock, i.e. the rock storage capacity, and the viscosity of the oil. When the reservoir rocks are "tight", as in shale, oil generally cannot flow through, but when they are permeable, as in sandstone, oil flows freely.

Although recovery of a well cannot be known with certainty until the well ceases production, petroleum engineers often determine an estimated ultimate recovery (EUR) based on decline rate projections years into the future. Various models, mathematical techniques, and approximations are used.

Shale gas EUR is difficult to predict, and it is possible to choose recovery methods that tend to underestimate decline of the well beyond that which is reasonable.

The oil and gas extraction workforce face unique health and safety challenges and is recognized by the National Institute for Occupational Safety and Health (NIOSH) as a priority industry sector in the National Occupational Research Agenda (NORA) to identify and provide intervention strategies regarding occupational health and safety issues. During 2003–2013, the annual rate of occupational fatalities significantly decreased 36.3%; however, the number of work-related fatalities in the U.S. oil and gas extraction industry increased 27.6%, with a total of 1,189 deaths because the size of the workforce grew during this period. Two-thirds of all worker fatalities were attributed to transportation incidents and contact with objects or equipment. More than 50% of persons fatally injured were employed by companies that service wells. Hazard controls include land transportation safety policies and engineering controls such as automated technologies.

Retrieved from "https://en.wikipedia.org/w/index.php?title=Extraction_of_petroleum&oldid=1004175642"
Uses material from the Wikipedia article Extraction of petroleum, released under the CC BY-SA 3.0 license.