The Philadelphia Police Department (PPD or Philly PD) is the police agency responsible for law enforcement and investigations within the City of Philadelphia, Pennsylvania. The PPD is one of the oldest municipal police agencies, fourth largest police force and sixth largest non-federal law enforcement agency in the United States. Since records were first kept in 1828, at least 289 PPD officers have died in the line of duty.

During the tenure of Frank Rizzo as police commissioner (1967–1971) and mayor (1972–1980), a pattern of police brutality, intimidation, coercion, and disregard for constitutional rights occurred within the department. The patterns of police brutality were documented in a 1978 Pulitzer-Prize winning Philadelphia Inquirer series by William K. Marimow and Jon Neuman. 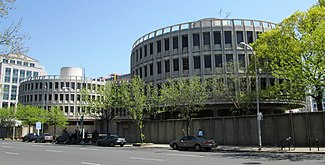 Philadelphia Police Department Headquarters known as "The Roundhouse", designed by Robert Geddes of the firm GBQC

The PPD employs over 6,400 sworn officers and over 800 civilian personnel, and patrols an area of 369.4 km² (142.6 mi²) with a population of almost 1.5 million. The department is subdivided into 21 patrol districts, and like many other large municipal police forces, it incorporates many special units such as a K-9 squad, SWAT, bomb squad, community relations unit, and marine unit. The highest-ranking officer is Commissioner Danielle Outlaw.

The head of the PPD is the commissioner, who is appointed by the mayor. The current commissioner is Danielle Outlaw (2020 - present).

The Office of Organizational Services, Strategy, and Innovation is headed by the three-star Deputy Commissioner and Chief Administrative Officer, currently Dennis Wilson is fulfilling these duties in addition to his normal duties.

In January 2013, Commissioner Ramsey announced changes to the command structure of the department lowering the number of deputy commissioners from 9 to 6. Ramsey only replaced one of the deputies who was promoted from staff inspector of the Internal Affairs Bureau to deputy commissioner of the Office of Professional Responsibility. 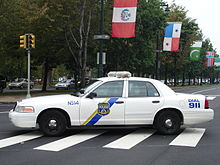 A Philadelphia police officer in the Mounted Patrol Unit, October 1973

Ranks within the Philadelphia Police Department

To be promoted in the Philadelphia Police Department, a police officer must finish his first year in the department. Then, when the next corporal or detective test is announced, they are eligible to take the test. Philadelphia PD Test for corporal and detectives is a written multiple choice test, lasting two to three hours. Also part of an officer's score is based on seniority.

The ranks of corporal and detective have the same pay grade, but have different functions. Corporals are "operations room supervisors" and are responsible for overseeing a patrol district's operations room, or a special unit's operations; i.e., ensure that reports are submitted accurately and in a timely manner, etc. Only rarely do corporals work the street. A corporal must have a minimum of a year's experience as a police officer.

Sergeants command a squad of officers, making assignments to beats, assigning traffic details, helping to supervise the radio room, commanding Marine Unit patrol boats and performing other similar tasks. When assigned to the detective bureau, a sergeant interviews suspects and witnesses, assigns detectives to cases and investigates clues, among other duties. Sergeants must have a minimum of two years experience as a police officer, or a year's experience as a corporal or detective.

The rank of lieutenant is the first executive supervisory rank. Lieutenants command an assigned area in a police district or a specialized unit, such as a traffic unit. If assigned as a detective, a lieutenant supervises an investigation. Lieutenants must have a minimum of one year's experience as a sergeant.

Captains either command police districts or direct the activities of a specialized unit. When assigned as a detective, a captain organizes and directs surveillance activities and police raids, prepares cases, interviews and interrogates suspects and testifies in court. Captains must have a minimum of one year's experience as a lieutenant.

Staff inspectors are usually departmental administrative officers, serving on the police Command Staff under a commissioner or deputy commissioner. They are generally assigned to inspect police divisions, districts and units, evaluate police practices, equipment and personnel, and make recommendations for improvement where necessary; however, they may also command units and divisions. Staff Inspectors must have a minimum of one year's service as a captain.

Inspectors are senior executive officers who typically command divisions and supervise officers under their command during any major police action, disaster or emergency. Inspectors must have a minimum of one year's service as a staff inspector or captain.

Chief inspectors are senior departmental administrative officers who either command bureaus within the department or who inspect police divisions, districts and units, evaluate police practices, equipment and personnel, and make recommendations for improvement where necessary. Chief inspectors must have a minimum of one year's service as a staff inspector or inspector.

The commissioner is appointed by the city managing director with mayoral approval, and is in charge of the entire department. 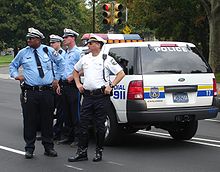 The PPD's officers are and have been of many ethnicities. A large number of Irish Americans have been PPD officers since the 1850s. 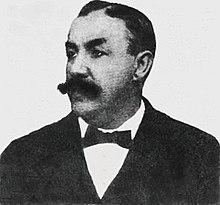 Officers who died on duty

Over 260 Philadelphia Police Department officers have died on duty.