The photic zone, euphotic zone, epipelagic zone, or sunlit zone is the uppermost layer of a body of water that receives sunlight, allowing phytoplankton to perform photosynthesis. It undergoes a series of physical, chemical, and biological processes that supply nutrients into the upper water column. The photic zone is home to the majority of aquatic life due to its location.

Life in the photic zone 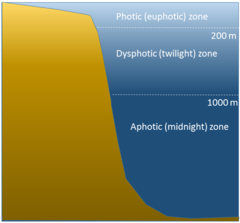 Zones of the water column as defined by the amount of light penetration. The mesopelagic is sometimes referred to as the dysphotic zone.

Layers of the pelagic zone

Ninety percent of marine life lives in the photic zone, which is approximately two hundred meters deep. This includes phytoplankton (plants), including dinoflagellates, diatoms, cyanobacteria, coccolithophorids, and cryptomonads. It also includes zooplankton, the consumers in the photic zone. There are carnivorous meat eaters and herbivorous plant eaters. Next, copepods are the small crustaceans distributed everywhere in the photic zone, and are actually the biggest group of animals on the planet. Finally, there are nekton (animals that can propel themselves, like fish, squids, and crabs), which are the largest and the most obvious animals in the photic zone, but their quantity is the smallest among all the groups.

Nutrients uptake in the photic zone

The depth is, roughly, where radiation is degraded down to 1% of its surface strength. Accordingly, its thickness depends on the extent of light attenuation in the water column. As incoming light at the surface can vary widely, this says little about the net growth of phytoplankton. Typical euphotic depths vary from only a few centimetres in highly turbid eutrophic lakes, to around 200 meters in the open ocean. It also varies with seasonal changes in turbidity, which can be strongly driven by phytoplankton concentrations, such that the depth of the photic zone often decreases as primary production increases. Moreover, the respiration rate is actually greater than the photosynthesis rate. The reason why phytoplankton production is so important is because it plays a prominent role when interwoven with other food webs.

Phytoplankton growth is affected by the colour spectrum of light,
and in the process called photosynthesis absorb light
in the blue and red range through photosynthetic pigments

Comparison of the depths which different colors of light penetrate open ocean waters and the murkier coastal waters. Water absorbs the warmer long wavelengths colours, like reds and oranges, and scatter the cooler short wavelength colours.

Most of the solar energy reaching the Earth is in the range of visible light, with wavelengths between about 400-700 nm. Each colour of visible light has a unique wavelength, and together they make up white light. The shortest wavelengths are on the violet and ultraviolet end of the spectrum, while the longest wavelengths are at the red and infrared end. In between, the colours of the visible spectrum comprise the familiar “ROYGBIV”; red, orange, yellow, green, blue, indigo, and violet.

Water is very effective at absorbing incoming light, so the amount of light penetrating the ocean declines rapidly (is attenuated) with depth. At one metre depth only 45% of the solar energy that falls on the ocean surface remains. At 10 metres depth only 16% of the light is still present, and only 1% of the original light is left at 100 metres. No light penetrates beyond 1000 metres.

In addition to overall attenuation, the oceans absorb the different wavelengths of light at different rates. The wavelengths at the extreme ends of the visible spectrum are attenuated faster than those wavelengths in the middle. Longer wavelengths are absorbed first; red is absorbed in the upper 10 metres, orange by about 40 metres, and yellow disappears before 100 metres. Shorter wavelengths penetrate further, with blue and green light reaching the deepest depths.

This is why things appear blue underwater. How colours are perceived by the eye depends on the wavelengths of light that are received by the eye. An object appears red to the eye because it reflects red light and absorbs other colours. So the only colour reaching the eye is red. Blue is the only colour of light available at depth underwater, so it is the only colour that can be reflected back to the eye, and everything has a blue tinge under water. A red object at depth will not appear red to us because there is no red light available to reflect off of the object. Objects in water will only appear as their real colours near the surface where all wavelengths of light are still available, or if the other wavelengths of light are provided artificially, such as by illuminating the object with a dive light.

Water in the open ocean appears clear and blue because it contains much less particulate matter, such as phytoplankton or other suspended particles, and the clearer the water, the deeper the light penetration. Blue light penetrates deeply and is scattered by the water molecules, while all other colours are absorbed; thus the water appears blue. On the other hand, coastal water often appears greenish. Coastal water contains much more suspended silt and algae and microscopic organisms than the open ocean. Many of these organisms, such as phytoplankton, absorb light in the blue and red range through their photosynthetic pigments, leaving green as the dominant wavelength of reflected light. Therefore the higher the phytoplankton concentration in water, the greener it appears. Small silt particles may also absorb blue light, further shifting the colour of water away from blue when there are high concentrations of suspended particles.

The ocean can be divided into depth layers depending on the amount of light penetration, as discussed in pelagic zone. The upper 200 metres is referred to as the photic or euphotic zone. This represents the region where enough light can penetrate to support photosynthesis, and it corresponds to the epipelagic zone. From 200 to 1000 metres lies the dysphotic zone, or the twilight zone (corresponding with the mesopelagic zone). There is still some light at these depths, but not enough to support photosynthesis. Below 1000 metres is the aphotic (or midnight) zone, where no light penetrates. This region includes the majority of the ocean volume, which exists in complete darkness.