Pick n Pay is the second largest supermarket chain store in South Africa, and was established in 1967. It can also be found in other regions of southern Africa, including as Botswana, Zambia, Zimbabwe, Lesotho, Namibia, Swaziland, and had plans to open in Malawi but has yet to do so. Raymond Ackerman purchased three Pick n Pay supermarkets from Jack Goldin in Cape Town, and served as executive chairman until his retirement in 2010. His eldest son, Gareth, is the current chairman.

As of 2018, the company was operating over 1,600 locations across seven countries in Southern Africa. In that year's annual report, the company announced a planned expansion into Nigeria, and that it was considering expanding into Ghana. Pick n Pay also operates stores under the Boxer brand in South Africa and Swaziland.

In mid 1994, Pick 'n Pay acquired the Score & Rite Valu Supermarket chains from the Johannesburg-based Metro Group. At the time, Score stores ranged from standard urban stores to informal, "Spaza" rural type outlets in South Africa's previously segregated Bantustan homelands and in Lesotho, Botswana and Swaziland (approximately 160 stores), These stores targeted lower income, black and coloured population groups with basic food, and other essential products. The approximate 40 Rite Valu stores based in South Africa only, catered for predominantly white groups in smaller towns in the greater Transvaal province. The attractiveness of the acquisition may have been attributed to the year-on-year growth of both chains over the prior 4 years, and the almost blatant copying of Pick 'n Pay's "in-house" products, which saw Score and Rite Valu developing their own, cheaper house brands and packaging through Johannesburg based ad agency Rayner Francis-Pope & Associates, The success of the strategy led to an increase in cyclical sales, margins and over all growth. South Africa's first democratic elections and change of government could have also been a driving factor in Metro Group's willingness to sell. Shortly after being consolidated into Pick 'n Pay's marketing channel managed by the Hedley Byrne agency, the Score and Rite Valu brands were eventually phased out. 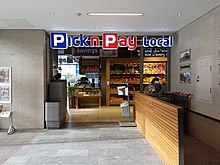 The Pick n Pay brand, which had previously remained largely unchanged since the 1970s, was redesigned in 2007. On 12 November 2007, the company announced a brand transformation in the form of a brand redesign, new uniforms, advertising campaigns, and the slogan "Inspired by You". This rebranding of the iconic Pick n Pay brand led to the disappearance of the apostrophe which appeared before the "n", which led to uproar among those working for the preservation of the apostrophe.

In 1984, a Pick 'n Pay Hypermarket was opened in Aspley, Queensland, and at Sunnybank Hills, Queensland, in 1994. They were bought by Coles Myer in the 1990s.

After the Aspley store opened, all mothers who had given birth on the store's opening date of 7 November 1984 were invited to bring their children for a birthday party each year. The birthday parties lasted until the mid 1990s when the store was bought by Coles Myer.