listen)) is a city and seat of the surrounding municipality of the same name in the Mexican state of Coahuila. It stands at the northeastern edge of Coahuila on the Mexico–United States border, across the Rio Grande from Eagle Pass in the U.S. state of Texas. In the 2015 census the city had a population of 163,595 inhabitants, while the metropolitan area had a population of 245,155 inhabitants. The Piedras Negras and the Eagle Pass areas are connected by the Eagle Pass–Piedras Negras International Bridge, Camino Real International Bridge, and the Union Pacific International Railroad Bridge.

In Spanish, Piedras Negras translates to 'black stones' – a reference to coal deposits in the area. Across the river, coal was formerly mined on the U.S. side at Dolchburg, near Eagle Pass. This mine closed around 1905, after a fire. Mexico currently operates two large coal-fired power station named "José López Portillo" and "Carbón 2" located 30 miles (48 km) south of Piedras Negras. These two coal-fired power plants are currently operated by Comisión Federal de Electricidad, the state-owned Mexican electric utility.

On June 15, 1850, a group of 34 men (commanded by Andrés Zapata, Gaspar Salazar and Antonio Ramírez) met with Colonel Juan Manuel Maldonado to give the news that they had created a pass point at Piedras Negras, to the right of the Rio Grande, south of Fort Duncan. They named it Nueva Villa de Herrera, but it later became Villa de Piedras Negras. In Otto Schober's "Breve historia de Piedras Negras," the local historian points out that the 34 men were repatriates (Mexican Americans) who arrived on June 15, 1850, in what was then called "Colonia Militar de Guerrero en Piedras Negras."

In 1855, the town was looted by a small force of 130 Texans that had been organized by Texas slaveholders for a punitive expedition against a nearby border settlement the Texans claimed were fugitive slaves and Indians. The force was led by a captain of the Texas Rangers. As it happened, the incursion was opposed and "repelled by a superior force of Negroes, Indians, and Mexicans who were waiting in ambush" inside Mexico. But the Ranger-led expedition then looted Piedras Negras while returning to Texas.

Following the discovery of huge deposits of coal in the region, in 1881 a railroad track was begun that was completed in 1883. The regional economy flourished and on December 1, 1888, it was granted city status; this time with the name of Ciudad Porfirio Díaz. After the fall of Diaz in 1911, the city reverted to being Piedras Negras, Coahuila.

On April 24, 2007, an F4 tornado struck the city, killing three people there and seven in Eagle Pass, Texas.

On the night of June 8, 2018, former Piedras Negras mayor Fernando Purón was shot in the back of the head by an unknown man while Purón was taking a selfie with an admirer. Purón died on the spot, becoming the 112th candidate or politician to be killed since Mexico's electoral campaign began in September 2017. Purón was supposed to run in the 2018 Mexican election on July 1 as a congressional candidate of the Institutional Revolutionary Party (PRI). Sonia Villareal, current mayor of Piedras Negras and fellow member of PRI, suspended her mayoral reelection campaign in response to Purón's murder to concentrate on her current duties, stating that "We don't (want) his name to be just one more added to the list of candidates who have been victims of these deplorable acts."

The high temperatures recorded in Piedras Negras have earned it recognition as one of the hottest cities in the country.

Highest precipitation months are May, June and September with an average monthly downfall in excess of 80 millimetres (3.1 in) but that is highly sporadic lending to frequent drought conditions. The period of lowest precipitation is between December through March, with a monthly average of 30 millimetres (1.2 in).

Coal used in the thermoelectric physical

This region generates a large amount of the national production of coal, one of the most economically important non-metallic minerals in the state. 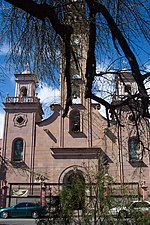 Church Our Lady of Guadalupe

International Day of the Nacho

The International Day of the Nacho takes place every October 21. It and a three-day Nacho Fest was initiated in the 1990s in the United States and Mexico to commemorate the invention of nachos by Ignacio "Nacho" Anaya in 1940 at the Victory Club restaurant in Piedras Negras.

For 12 years in a row, the Annual Bike Fest has attracted visitors from 41 different cities in Mexico and the United States. Activities last for 2–3 days and include concerts, food sales, acrobatic shows, a drive through town and a drawing with a brand new bike as the grand prize. The 2016 prize was a Harley Davidson Sportster. The 2016 Bike Fest brought a revenue of Mex$1.5 million, roughly US$37,875.

Piedras Negras belongs to the North economic region of Coahuila. According to [INEGI] data, the secondary and services sectors occupy almost the entire occupied population, while the primary sector occupies an almost zero percentage. The maquiladora industry employs almost 10,000 people in the municipality (about 25% of the Occupied Population), mainly engaged in the manufacture of automotive parts, electronic components and textiles.

The José López Portillo Thermoelectric Power Plant of the Federal Electricity Commission has an effective installed capacity of 1200 MW in four generating units of 300 MW each. The CTJLP is located a de Piedras Negras by the national road 57 and its infrastructure can be seen from different points of the city of piedras negras being an icon of the municipality of Nava.

This central is interconnected to the National System through 2 lines of 230 kV and 2 lines of 400 kV which are directed towards Arroyo el Coyote de Nuevo Laredo Tamaulipas and towards The Coal Frontier in Ciudad Frontera Coahuila respectively.

The main features of the plant are its coal management systems, bottom ash handling and steering wheel and its cooling system whose water is transported through an aqueduct from the Rio Bravo to its pond, traveling.

The average annual generation achieved is 9,200,000 MWH with a coal consumption of 5,300,000 t and an availability of more than 90%, thus being among the best nationally which has earned it several recognitions for its efficiency in the national system.

Located in Nava, the Coal Thermoelectric Plant II is the second large-scale power plant built in Mexico to use non-coking mineral coal as a primary source of energy. It is part of the Northern Regional Production Management and delivers the generated energy to the Northeast Control Area through the 400 kV Lampazos I and II transmission lines, as well as a link to the Rio Escondido substation at the same voltage level.

The Central has four generating units with a capacity of 350,000 kW each, for a total of 1,400,000 kW. So it is currently the largest coal-fired thermoelectric plant in Latin America. annually delivers a generation of 10,300,000 MWh. Reflecting the great commitment of the staff of this Central, it is currently certified by different national and international bodies. Another important industrial branch is automotive metal, specialized in the manufacture of parts for suspension, which has been a fundamental pillar in the economy of the region, employing more than 2,000 people.

Producing docks for freight transport, this company is part of Hendrickson International within its suspensions division, in turn Company of The Boler Company.

San Luis Rassini produces high-effort multi-sheet and parabolic springs as well as hot-rolled springs and torsion bars for the suspension of light vehicles and cars, focusing their production mostly on the U.S. market as well as the marking national auto parts.

Other important sources of employment in the region are the coal and coal 2 thermoelectric plants, Minera Carbonífera Río Escondido (MICARE) and the Coca-Cola plant (all in the municipality of Nava, conurbado with the city of Piedras Negras). In the municipality there are 6 industrial parks, which have services of drinking water, drainage, electric power, telephone and public lighting:

Some incentives currently offered by the municipality for the installation of new companies are:

The workforce is specialized in the automotive, textile and electronics branches. Most of the workforce is owned by the Mexican Workers' CTM, CROC and SUTERM. According to the BlackStones Maquiladora Industry Salary Survey, the daily wage for a general worker as of January 2006 was $47.85 to $87.60 while for an average command it is $173.91 to $205.00.

According to statistics IMSS, the affiliated workers of the municipality have an average salary of 4'15 S.M. (Zone C, $45.81), which is relatively high compared to other cities such as Saltillo, with 4'75 S.M. or Torreón (Coahuila de Zaragoza), with 3'40 S.M. Approximately 20% of the Economically Active Population receives more than 5 S.M., while 21% receive an income of 3 to 5 S.M. The rest get less than 3 S.M.