The Pine Creek Rail Trail is a rail trail in the Appalachian Mountains of north-central Pennsylvania.

The trail begins just north of Wellsboro, runs south through Pine Creek Gorge (also known as the Grand Canyon of Pennsylvania), and ends at Jersey Shore. A 2001 article in USA Today named the 65-mile-long (105 km) trail one of "10 great places to take a bike tour" in the world.

The Pine Creek Rail Trail is approximately 65 miles (105 km) from end to end, and it generally follows a north–south orientation. The trail is located wholly within Tioga and Lycoming Counties. The trail carries a section of BicyclePA Route G.

The trail's northern terminus is near the intersection of U.S. Route 6 and Pennsylvania Route 287, about 3 miles (4.8 km) north of Wellsboro. (Parking is located at the southernmost end of Butler Road). The trail parallels Route 6 in a southwesterly direction for about 6 miles (9.7 km) until it reaches the village of Ansonia. South of Ansonia, the trail parallels Pine Creek as it goes south along the floor of Pine Creek Gorge. It passes through Leonard Harrison State Park and the Tioga State Forest. Approximately 17 miles (27 km) south of Ansonia, the trail passes through the village of Blackwell. The section between Ansonia and Blackwell is very remote, and much of the trail is inaccessible by road. 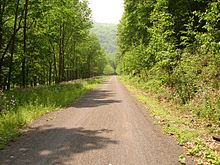 Boroughs, villages, and attractions located along or near the trail (from north to south):

The Native American Pine Creek Path followed Pine Creek from Jersey Shore to Ansonia and beyond. The earliest industry in the region was logging. In the years between 1820 and 1883, trees were floated down the creek to sawmills in Jersey Shore and Williamsport. In 1883, the Jersey Shore, Pine Creek and Buffalo Railway opened. Sawmills were constructed in several communities along the creek, and finished products were carried out by train. Coal mining was another important industry, and coal was also shipped along the railroad.

After a series of reorganizations, the railroad along Pine Creek became a part of the New York Central Railroad and eventually Conrail. Freight and passenger service continued for many years. In 1988, Conrail ended rail service. The tracks were removed, and the first section of the Pine Creek Rail Trail opened in 1996. The trail opened in stages with the most recent section (from Ansonia to just north of Wellsboro) being completed in 2007. The trail is operated by the Pennsylvania Department of Conservation and Natural Resources.

In 2001, an article in the USA Today newspaper named the Pine Creek Rail Trail one of "10 great places to take a bike tour" in the world. It was one of only five places in the continental United States on the list, which was compiled by Patricia Vance, author of bicycle touring guides. The article cited the "Grand Canyon of Pennsylvania" as "idyllic in fall" and mentioned the "gorge with views of the cliffs and mixed hardwood forest".

During the Great Depression, the Civilian Conservation Corps built numerous roads, bridges, and trails through the area. Evidence of their work is still visible and is commemorated with a sign near the Darling Run trail access area. 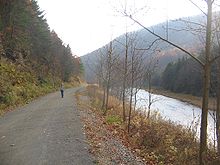 The trail is relatively flat with only gentle grades. It is topped with crushed limestone. Bicycling and hiking are extremely popular during the spring, summer, and fall. The trail provides opportunities for cross-country skiing during the winter. Between Ansonia and Tiadaghton, horseback riding is permitted on the trail.

The trail intersects with several hiking trails, including the Pennsylvania Mid State Trail. During some parts of the year, Pine Creek provides excellent opportunities for fishing, canoeing, and kayaking. However, the water level in the creek varies significantly, and it is sometimes too shallow for boating.

Without a written permit from the Pennsylvania Department of Conservation and Natural Resources, motorized vehicles are strictly forbidden from using the trail. This ban includes motorcycles, snowmobiles and all-terrain vehicles.

Camping is allowed only in certain areas such as Bonell Flats and Black Walnut Bottom along the trail, and permits for these locations must be obtained in advance from the Pennsylvania Department of Conservation and Natural Resources. Several private campgrounds are located near the trail. Numerous lodging establishments are available in Wellsboro and Jersey Shore. There are also small lodging establishments located in Blackwell and Cedar Run, and private cabin rentals are available along the trail.

Parking areas and composting toilets are available at regular intervals along the entire length of the trail. Several water pumps are provided along the trail, but trail users should carry enough water to last for the duration of their trips. The boroughs of Wellsboro and Jersey Shore offer a full array of services and supplies. Restaurants are located in Blackwell, Cedar Run, Slate Run, Waterville and Jersey Shore. Gasoline and other supplies are available at general stores located in Ansonia, Slate Run and Waterville.

The final section of the trail opened in 2007, and there are no immediate plans to expand the trail at this time. Several groups have proposed expanding the trail into the borough of Wellsboro or building a trail along the West Branch Susquehanna River between Jersey Shore and Williamsport.