The Pontcysyllte Aqueduct (Welsh pronunciation: [ˌpɔntkəˈsəɬtɛ]; Welsh: Traphont Ddŵr Pontcysyllte) is a navigable aqueduct that carries the Llangollen Canal across the River Dee in the Vale of Llangollen in northeast Wales.

The 18-arched stone and cast iron structure is for use by narrowboats and was completed in 1805 having taken ten years to design and build. It is 12 ft (3.7 metres) wide and is the longest aqueduct in Great Britain and the highest canal aqueduct in the world. A footpath runs alongside the watercourse on one side.

The aqueduct was to have been a key part of the central section of the proposed Ellesmere Canal, an industrial waterway that would have created a commercial link between the River Severn at Shrewsbury and the Port of Liverpool on the River Mersey. Although a less expensive construction course was surveyed further to the east, the westerly high-ground route across the Vale of Llangollen was preferred because it would have taken the canal through the mineral-rich coalfields of North East Wales. Only parts of the canal route were completed because the expected revenues required to complete the entire project were never generated. Most major work ceased after the completion of the Pontcysyllte Aqueduct in 1805.

The structure is a Grade I listed building and a UNESCO World Heritage Site.

Other translations such as "Bridge of the Junction" or "The Bridge that links" are a modern false etymology, derived from the name's apparent similarity to the word cysylltau (plural of cyswllt) which means connections or links.

The aqueduct viewed from the valley below

The aqueduct was designed by civil engineers Thomas Telford and William Jessop for a location near an 18th-century road crossing, Pont Cysyllte. After the westerly high-ground route was approved, the original plan was to create a series of locks down both sides of the valley to an embankment that would carry the Ellesmere Canal over the River Dee. After Telford was hired the plan was changed to an aqueduct that would create an uninterrupted waterway straight across the valley. Despite considerable public scepticism, Telford was confident his construction method would work because he had previously built a cast-iron trough aqueduct – the Longdon-on-Tern Aqueduct on the Shrewsbury Canal.

The aqueduct was one of the first major feats of civil engineering undertaken by Telford, who was becoming one of Britain's leading industrial civil engineers; although his work was supervised by Jessop, the more experienced canal engineer. Ironwork was supplied by William Hazledine from his foundries at Shrewsbury and nearby Cefn Mawr. The work, which took around ten years from design to construction, cost around of £47,000. Adjusted for inflation this is equivalent to no more than £3,840,000 in 2019, but represented a major investment against the contemporary GDP of some £400 million.

The Pontcysyllte aqueduct officially opened to traffic on 26 November 1805. A plaque commemorating its inauguration reads:

The bridge is 336 yd (307 m) long, 12 ft (3.7 m) wide and 5 ft 3 in (1.60 m) deep. It consists of a cast iron trough supported 126 ft (38 m) above the river on iron arched ribs carried on eighteen hollow masonry piers (pillars). Each of the 18 spans is 53 ft (16 m) wide. With the completion of the aqueduct, the next phase of the canal should have been the continuation of the line to Moss Valley, Wrexham where Telford had constructed a feeder reservoir lake in 1796. This would provide the water for the length of canal between Trevor Basin and Chester. The plan to build this section was cancelled in 1798, and the isolated feeder and a stretch of navigation between Ffrwd and a basin in Summerhill was abandoned. Remnants of the feeder channel are visible in Gwersyllt. A street in the village is still named Heol Camlas (Welsh: Canal Way).

With the project incomplete, Trevor Basin just over the Pontcysyllte aqueduct would become the canal's northern terminus. In 1808 a feeder channel to bring water from the River Dee near Llangollen was completed. In order to maintain a continual supply, Telford built an artificial weir known as the Horseshoe Falls near Llantysilio to maintain water height.

Subsequently, the Plas Kynaston Canal was built to serve industry in the Cefn Mawr and Rhosymedre areas in the 1820s. There might have been another canal extension ("Ward's") but detailed records do not survive. Goods traffic was brought down to the canal by the Ruabon Brook Tramway which climbed towards Acrefair and Plas Bennion. This railway was eventually upgraded to steam operation and extended towards Rhosllannerchrugog and Wrexham.

In 1844, the Ellesmere and Chester Canal Company, which owned the broad canals from Ellesmere Port to Chester and from Chester to Nantwich, with a branch to Middlewich, began discussions with the narrow Birmingham and Liverpool Junction Canal, which ran from Nantwich to Autherley, where it joined the Staffordshire and Worcestershire Canal. The two companies had always worked together, in a bid to maintain their profits against competition from the railways, and amalgamation seemed to be a logical step. An agreement was worked out by August, and the two companies then sought a Private Act of Parliament to authorise the takeover. This was granted on 8 May 1845, when the larger Ellesmere and Chester Canal Company was formed. 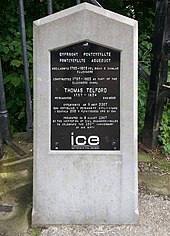 In 1846, the canal and the aqueduct became part of the Shropshire Union Railways and Canal Company. But the intent of the merger was to build railways at a reduced cost, by using the existing routes of the canals they owned. By 1849, the plan to turn canals into railways had been dropped. As the aqueduct was largely in an area that was served by railways owned by the Great Western Railway, the LNWR was more than happy for the canal to remain open as long as it remained profitable. With the start of the First World War in 1914, the Shropshire Union – which the Pontcysyllte aqueduct was a part – served the war effort with its fleet of more than 450 narrow boats.

Commercial traffic on the canal greatly declined after a waterway breach near Newtown, Powys (now part of the Montgomery Canal) in 1936. By 1939 boat movements across the aqueduct to Llangollen had ceased. The canal was formally closed to navigation under the London Midland and Scottish Railway Company Act of 1944. On 6 September 1945, due to inadequate maintenance, the canal breached its banks east of Llangollen near Sun Bank Halt. The flow of hundreds of tons of water washed away the embankment of the railway further down the hill, tearing a 40-yard (37 m) crater 50 feet (15 m) deep. This caused the first traffic of the morning, a mail and goods train composed of 16 carriages and two vans, to crash into the breach, killing one and injuring two engine crew.

The aqueduct was saved (despite its official closure to waterway traffic) because it was still required as a water feeder for the remainder of the Shropshire Union Canal. The aqueduct also supplied drinking water to a reservoir at Hurleston. In 1955 the Mid & South East Cheshire Water Board agreed to maintain the canal securing its future.

In the latter half of the 20th century, leisure boating traffic began to rise. In a rebranding exercise by British Waterways in the 1980s, the former industrial waterway was renamed the Llangollen Canal. It has since become one of the most popular canals for holidaymakers in Britain because of its aqueducts and scenery. The Pontcysyllte Aqueduct is now maintained and managed by the Canal & River Trust (branded Glandŵr Cymru in Wales). Otters have been seen in the area.

The mortar used lime, water and ox blood. Blood and extracts of blood containing haemoglobin have been used in the construction and building industry since antiquity as air entraining colloids to inexpensively strengthen mortar exposed to freeze-thaw temperature cycles.

The iron castings for the trough were produced at the nearby Plas Kynaston Foundry, Cefn Mawr, which was built by the Shrewsbury ironfounder and millwright William Hazledine in the hope of gaining the contract. The rib castings may have been made at Hazledine's original works at Coleham, near Shrewsbury. The trough was made from flanged plates of cast iron, bolted together, with the joints bedded with Welsh flannel and a mixture of white lead and iron particles from boring waste.

After 25 years the white lead was replaced with ordinary tar. As with Telford's Longdon-on-Tern Aqueduct, the plates are not rectangular but shaped as voussoirs, similar to those of a stone arch. There is no structural significance to their shape: it is a decorative feature only, following the lines of the stiffening plates (see below) in the castings beneath.

In nearby Cefn Mawr a high quartz content sandstone was discovered at the location where the New Cefn Druids football stadium has since been built. Known locally as 'The Rock', the sandstone was extracted and worked here into the many numerous shapes as required by the architects. Many remnants of the workings are still visible alongside Rock Road which links Rhosymedre to Plas Madoc.

The supporting arches, four for each span, are in the form of cast-iron ribs, each cast as three voussoirs with external arches cast with an un-pierced web to give greater strength, at the cost of extra weight. Using cast iron in this way, in the same manner as the stone arch it supersedes, makes use of the material's strength in compression. They also give an impression of greater solidity than would be the case were the webs pierced. This impression is enhanced by the arrangement of strips of thicker stiffening incorporated into the castings, arranged in the manner of joints between voussoirs.

Cast plates are laid transversely to form the bed of the canal trough. The trough is not fastened to the arches, but lugs are cast into the plates to fit over the rib arches to prevent movement. The aqueduct was left for six months with water inside to check that it was watertight. A feature of a canal aqueduct, in contrast with a road or railway viaduct, is that the vertical loading stresses are virtually constant. According to Archimedes' principle, the mass (weight) of a boat and its cargo on the bridge pushes an equal mass of water off the bridge.

The towpath is mounted above the water, with the inner edge carried on cast-iron pillars in the trough. This arrangement allows the water displaced by the passage of a narrow boat to flow easily under the towpath and around the boat, enabling relatively free passage. Pedestrians, and the horses once used for towing, are protected from falling from the aqueduct by railings on the outside edge of the towpath, but the holes in the top flange of the other side of the trough, capable of mounting railings, were never used. The trough sides rise only about 6 inches (15 cm) above the water level, less than the depth of freeboard of an empty narrow boat, so the helmsman of the boat has no visual protection from the impression of being at the edge of an abyss. The trough of the Cosgrove aqueduct has a similar structure, although it rests on trestles rather than iron arches. It is also less impressively high.

Every five years the ends of the aqueduct are closed and a plug in one of the highest spans is opened to drain the canal water into the River Dee below, to allow inspection and maintenance of the trough.

The aqueduct and surrounding lands were submitted to the "tentative list" of properties being considered for UNESCO World Heritage Site status in 1999. The aqueduct was suggested as a contender in 2005—its 200th anniversary year—and it was formally announced in 2006 that a larger proposal, covering a section of the canal from the aqueduct to Horseshoe Falls would be the United Kingdom's 2008 nomination.

The length of canal from Rhoswiel, Shropshire, to the Horseshoe Falls, including the main Pontcysyllte Aqueduct structure as well as the older Chirk Aqueduct, were visited by assessors from UNESCO during October 2008, to analyse and confirm the site management and authenticity. The aqueduct was inscribed by UNESCO on the World Heritage List on 27 June 2009.