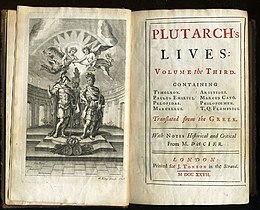 A biography, or simply bio, is a detailed description of a person's life. It involves more than just the basic facts like education, work, relationships, and death; it portrays a person's experience of these life events. Unlike a profile or curriculum vitae (résumé), a biography presents a subject's life story, highlighting various aspects of his or her life, including intimate details of experience, and may include an analysis of the subject's personality.

Biographical works are usually non-fiction, but fiction can also be used to portray a person's life. One in-depth form of biographical coverage is called legacy writing. Works in diverse media, from literature to film, form the genre known as biography.

Refresh with new selections below (purge)

Did you know... - show different entries

The following are images from various biography-related articles on Wikipedia.

Do you have a question about Wikipedia biographical content that you can't find the answer to?

Consider asking it at the Wikipedia reference desk.

For editor resources and to collaborate with other editors on improving Wikipedia's Biography-related articles, see WikiProject Biography.

24 January 2021 – Russia–United States relations, 2021 Russian protests
The Russian government accuses the United States of "interfering in Russian domestic affairs" after some U.S. officials criticized the police crackdown on protests backing jailed opposition leader Alexei Navalny. (RFERL)
23 January 2021 – 2021 Russian protests, aftermath of the poisoning of Alexei Navalny
Over 3,500 people are detained in Russia amid nationwide protests in support of jailed opposition leader Alexei Navalny. Moscow officials say 29 people have received medical assistance in hospitals, while a female protester in Saint Petersburg is currently in intensive care after being kicked by a riot police officer. (DW) (Sky News) (The Moscow Times)
19 January 2021 – Uganda–United States relations
A Ugandan government spokesman accuses the U.S. government of "subversion" after ambassador Natalie E. Brown tried to visit opposition leader Bobi Wine at his home, where he is under house arrest. Brown said that she wanted to check on the "health and safety" of Wine. (Reuters)
16 January 2021 – COVID-19 pandemic
Prime Minister Narendra Modi launches the world's largest vaccination programme against COVID-19 in India, which plans to vaccinate more than 1.3 billion people. A sanitation worker is the first person to receive the vaccine. (BBC)
16 January 2021 – 2021 Christian Democratic Union of Germany leadership election
North Rhine-Westphalia minister-president Armin Laschet is elected leader of the Christian Democratic Union, one of the ruling parties in the Bundestag and the party of incumbent Chancellor Angela Merkel. Laschet's election makes him a front-runner to be the party's candidate in the federal election in September. (AFP via The Local)
16 January 2021 – 2021 Ugandan general election
The Electoral Commission of Uganda declares incumbent President Yoweri Museveni the winner of the presidential election, winning about 59% of the vote, while opposition leader Bobi Wine received only 35% of the vote, according to the commission. (BBC)

Quote of the week

"The fool doth think he is wise, but the wise man knows himself to be a fool."

Retrieved from "https://en.wikipedia.org/w/index.php?title=Portal:Biography&oldid=998993449"
Uses material from the Wikipedia article Portal:Biography, released under the CC BY-SA 3.0 license.