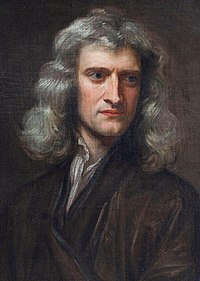 There is no set whose size is strictly between that of the integers and that of the real numbers.

Or mathematically speaking, noting that the cardinality for the integers

("aleph-null") and the cardinality of the real numbers

This is equivalent to:

The real numbers have also been called the continuum, hence the name. (Full article...)

Conway's Game of Life
Credit: User:Protious (animation) & Hyperdeath (original still image)
Conway's Game of Life is a cellular automaton devised by the British mathematician John Horton Conway in 1970. It is an example of a zero-player game, meaning that its evolution is completely determined by its initial state, requiring no further input as the game progresses. After an initial pattern of filled-in squares ("live cells") is set up in a two-dimensional grid, the fate of each cell (including empty, or "dead", ones) is determined at each step of the game by considering its interaction with its eight nearest neighbors (the cells that are horizontally, vertically, or diagonally adjacent to it) according to the following rules: (1) any live cell with fewer than two live neighbors dies, as if caused by under-population; (2) any live cell with two or three live neighbors lives on to the next generation; (3) any live cell with more than three live neighbors dies, as if by overcrowding; (4) any dead cell with exactly three live neighbors becomes a live cell, as if by reproduction. By repeatedly applying these simple rules, extremely complex patterns can emerge. In this animation, a breeder (in this instance called a puffer train, colored red in the final frame of the animation) leaves guns (green) in its wake, which in turn "fire out" gliders (blue). Many more complex patterns are possible. Conway developed his rules as a simplified model of a hypothetical machine that could build copies of itself, a more complicated version of which was discovered by John von Neumann in the 1940s. Variations on the Game of Life use different rules for cell birth and death, use more than two states (resulting in evolving multicolored patterns), or are played on a different type of grid (e.g., a hexagonal grid or a three-dimensional one). After making its first public appearance in the October 1970 issue of Scientific American, the Game of Life popularized a whole new field of mathematical research called cellular automata, which has been applied to problems in cryptography and error-correction coding, and has even been suggested as the basis for new discrete models of the universe.
edit

Did you know – view different entries

More did you know
Showing 7 items out of 75
edit

The Mathematics WikiProject is the center for mathematics-related editing on Wikipedia. Join the discussion on the project's talk page.

Things you can do

In other Wikimedia projects

Retrieved from "https://en.wikipedia.org/w/index.php?title=Portal:Mathematics&oldid=989965985"
Uses material from the Wikipedia article Portal:Mathematics, released under the CC BY-SA 3.0 license.