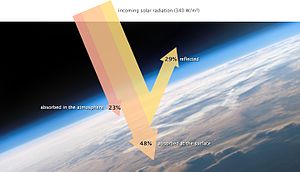 Radiative forcing is the difference between solar irradiance (sunlight) absorbed by the Earth and energy radiated back to space. It is the scientific basis for the greenhouse effect on planets, and plays an important role in computational models of Earth's energy balance and climate. Changes to Earth's radiative equilibrium that cause temperatures to rise or fall over decadal periods are called climate forcings.

Radiative forcing on Earth is meaningfully evaluated at the tropopause and at the top of the stratosphere. It is quantified in units of watts per square meter, and often summarized as an average over the total surface area of the globe. Radiative forcing varies with solar insolation, surface albedo, and the atmospheric concentrations of radiatively active gases - commonly known as greenhouse gases - and aerosols.

Atmospheric gases only absorb some wavelengths of energy but are transparent to others. The absorption patterns of water vapor (blue peaks) and carbon dioxide (pink peaks) overlap in some wavelengths. Carbon dioxide is not as strong a greenhouse gas as water vapor, but it absorbs energy in wavelengths (12-15 micrometers) that water vapor does not, partially closing the “window” through which heat radiated by the surface would normally escape to space. (Illustration NASA, Robert Rohde)
Main article: Earth's energy budget

Almost all of the energy that affects Earth's climate is received as radiant energy from the Sun. The planet and its atmosphere absorb and reflect some of the energy, while long-wave energy is radiated back into space. The balance between absorbed and radiated energy determines the average global temperature. Because the atmosphere absorbs some of the re-radiated long-wave energy, the planet is warmer than it would be in the absence of the atmosphere: see greenhouse effect.

The radiation balance is altered by such factors as the intensity of solar energy, reflectivity of clouds or gases, absorption by various greenhouse gases or surfaces and heat emission by various materials. Any such alteration is a radiative forcing, and changes the balance. This happens continuously as sunlight hits the surface, clouds and aerosols form, the concentrations of atmospheric gases vary and seasons alter the groundcover.

In simple terms, radiative forcing is "...the rate of energy change per unit area of the globe as measured at the top of the atmosphere." In the context of climate change, the term "forcing" is restricted to changes in the radiation balance of the surface-troposphere system imposed by external factors, with no changes in stratospheric dynamics, no surface and tropospheric feedbacks in operation (i.e., no secondary effects induced because of changes in tropospheric motions or its thermodynamic state), and no dynamically induced changes in the amount and distribution of atmospheric water (vapour, liquid, and solid forms). 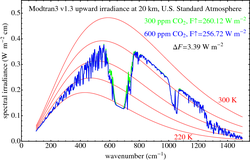 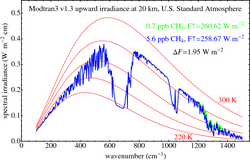 Radiative forcing (measured in watts per square meter) can be estimated in different ways for different components. For solar irradiance (i.e. "solar forcing"), the radiative forcing is simply the change in the average amount of solar energy absorbed per square meter of the Earth's area. Approximating the Earth as a sphere, the Earth's cross-sectional area exposed to the Sun (

), the solar input per unit area is one quarter the change in solar intensity. Since some radiation is reflected, this must be multiplied by the fraction of incident sunlight that is absorbed,

, where R is the reflectivity (albedo) of the Earth —approximately 0.3, so F is approximately equal to 0.7. Thus, the solar forcing is the change in the solar intensity divided by 4 and multiplied by 0.7.

Forcing due to atmospheric gas

For a greenhouse gas, such as carbon dioxide, radiative transfer codes that examine each spectral line for atmospheric conditions can be used to calculate the change ΔF as a function of changing concentration. These calculations might be simplified into an algebraic formulation that is specific to that gas.

For instance, a proposed simplified first-order approximation expression for carbon dioxide would be:

where C is the CO
2 concentration in parts per million by volume and C0 is the reference concentration. The relationship between carbon dioxide and radiative forcing is logarithmic, at concentrations up to around eight times the current value, and thus increased concentrations have a progressively smaller warming effect. Some claim that at higher concentrations, however, it becomes supra-logarithmic so that there is no saturation in the absorption of infrared radiation by CO
2.

A different formula might apply for other greenhouse gases such as methane and N
2O (square-root dependence) or CFCs (linear), with coefficients that may be found e.g. in the IPCC reports. While recently a study suggests a significant revision of methane IPCC formula.

Radiative forcing can be a useful way to evaluate multiple perturbations to a climate system over time. The table and figures below (derived by researchers at NOAA from atmospheric radiative transfer models) shows changes since year 1979 in the radiative forcing of the long-lived and well-mixed greenhouse gases that have been rapidly increasing in earth's atmosphere since the industrial revolution. The table includes the direct forcing contributions from carbon dioxide (CO
2), methane (CH
4), nitrous oxide (N
2O); chlorofluorocarbons (CFCs) 12 and 11; and fifteen other halogenated gases. These data do not include the significant forcing contributions from shorter-lived and less-well-mixed gases or aerosols; including those indirect forcings from the decay of methane and some halogens. They also do not account for changes in land or solar activity.

Growth in the direct radiative forcing of long-lived greenhouse gases since year 1979. The AGGI is shown on the right axis.

The radiative forcing contribution from carbon dioxide since 1979. The percentage change from year 1990 is shown on the right axis. 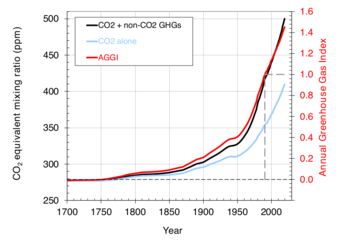 The industrial era growth in CO2-equivalent gas concentration and AGGI since year 1750.

These data show that CO
2 dominates the total forcing, with methane and chlorofluorocarbons (CFC) becoming relatively smaller contributors to the total forcing over time. The five major greenhouse gases account for about 96% of the direct radiative forcing by long-lived greenhouse gas increases since 1750. The remaining 4% is contributed by the 15 minor halogenated gases.

It might be observed that the total forcing for year 2016, 3.027 W m−2, together with the commonly accepted value of climate sensitivity parameter λ, 0.8 K /(W m−2), results in an increase in global temperature of 2.4 K, much greater than the observed increase, about 1.2 K. Part of this difference is due to lag in the global temperature achieving steady state with the forcing. The remainder of the difference is due to negative aerosol forcing, climate sensitivity being less than the commonly accepted value, or some combination thereof.

The table also includes an "Annual Greenhouse Gas Index" (AGGI), which is defined as the ratio of the total direct radiative forcing due to long-lived greenhouse gases for any year for which adequate global measurements exist to that which was present in 1990. 1990 was chosen because it is the baseline year for the Kyoto Protocol. This index is a measure of the inter-annual changes in conditions that affect carbon dioxide emission and uptake, methane and nitrous oxide sources and sinks, the decline in the atmospheric abundance of ozone-depleting chemicals related to the Montreal Protocol. and the increase in their substitutes (hydrogenated CFCs (HCFCs) and hydrofluorocarbons (HFC). Most of this increase is related to CO
2. For 2013, the AGGI was 1.34 (representing an increase in total direct radiative forcing of 34% since 1990). The increase in CO
2 forcing alone since 1990 was about 46%. The decline in CFCs considerably tempered the increase in net radiative forcing.

An alternative table prepared for use in climate model intercomparisons conducted under the auspices of IPCC and including all forcings, not just those of greenhouse gases, is available at http://www.climatechange2013.org/images/report/WG1AR5_AIISM_Datafiles.xlsx

Radiative forcing can be used to estimate a subsequent change in steady-state (often denoted "equilibrium") surface temperature (ΔTs) arising from that forcing via the equation:

where λ is commonly denoted the climate sensitivity parameter, usually with units K/(W/m2), and ΔF is the radiative forcing in W/m2. A typical value of λ, 0.8 K/(W/m2), gives an increase in global temperature of about 1.6 K above the 1750 reference temperature due to the increase in CO
2 over that time (278 to 405 ppm, for a forcing of 2.0 W/m2), and predicts a further warming of 1.4 K above present temperatures if the CO
2 mixing ratio in the atmosphere were to become double its pre-industrial value; both of these calculations assume no other forcings.

Historically, radiative forcing displays the best predictive capacity for specific types of forcing such as greenhouse gases. It is less effective for other anthropogenic influences like soot. A new framework called ‘effective radiative forcing’ or ERF removes the effect of rapid adjustments within the atmosphere that are unrelated to longer term surface temperature responses. ERF means different factors driving climate change can be placed onto a level playing field to enable comparison of their effects and a more consistent view of how global surface temperature responds to various types of human forcing.

Other metrics can be constructed for the same purpose as radiative forcing. For example Shine et al. say "... recent experiments indicate that for changes in absorbing aerosols and ozone, the predictive ability of radiative forcing is much worse ... we propose an alternative, the 'adjusted troposphere and stratosphere forcing'. We present GCM calculations showing that it is a significantly more reliable predictor of this GCM's surface temperature change than radiative forcing. It is a candidate to supplement radiative forcing as a metric for comparing different mechanisms ...". In this quote, GCM stands for "global circulation model", and the word "predictive" does not refer to the ability of GCMs to forecast climate change. Instead, it refers to the ability of the alternative tool proposed by the authors to help explain the system response.

Therefore, the concept of radiative forcing has been evolving from the initial proposal, named nowadays instantaneous radiative forcing (IRF), to other proposals that aims to relate better the radiative imbalance with global warming (global surface mean temperature). In this sense the adjusted radiative forcing, in its different calculation methodologies, estimates the imbalance once the stratosphere temperatures has been modified to achieve a radiative equilibrium in the stratosphere (in the sense of zero radiative heating rates). This new methodology is not estimating any adjustment or feedback that could be produced on the troposphere (in addition to stratospheric temperature adjustments), for that goal another definition, named effective radiative forcing has been introduced. In general the ERF is the recommendation of the CMIP6 radiative forcing analysis although the stratospherically adjusted methodologies are still being applied in those cases where the adjustments and feedbacks on the troposphere are considered not critical, like in the well mixed greenhouse gases and ozone. A methodology named radiative kernel approach allows to estimate the climate feedbacks within an offline calculation based on a linear approximation