Substance in a refrigeration cycle 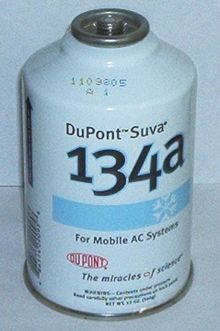 A refrigerant is a substance or mixture, usually a fluid, used in a heat pump and refrigeration cycle. In most cycles it undergoes phase transitions from a liquid to a gas and back again. Many working fluids have been used for such purposes. Fluorocarbons, especially chlorofluorocarbons, became commonplace in the 20th century, but they are being phased out because of their ozone depletion effects. Other common refrigerants used in various applications are ammonia, sulfur dioxide, and non-halogenated hydrocarbons such as propane.

The ideal working fluid or often called refrigerant would have favorable thermodynamic properties, be noncorrosive to mechanical components, and be safe, including freedom from toxicity and flammability. It would not cause ozone depletion or climate change. Since different fluids have the desired traits in different degree, choice is a matter of trade-offs.

The desired thermodynamic properties are a boiling point somewhat below the target temperature, a high heat of vaporization, a moderate density in liquid form, a relatively high density in gaseous form, and a high critical temperature. Since boiling point and gas density are affected by pressure, refrigerants may be made more suitable for a particular application by appropriate choice of operating pressures. 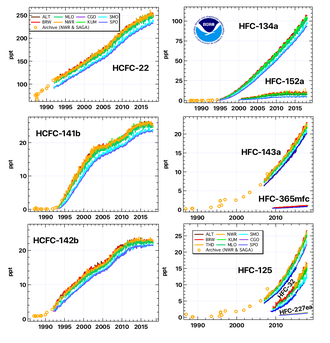 The observed stabilization of HCFC concentrations (left graphs) and the growth of HFCs (right graphs) in earth's atmosphere.

The discovery of stratospheric ozone holes over polar regions in the early 1980's led to a transition to hydrofluorocarbons (HFCs) which are not-ozone depleting. These include R-134a, R-143a, and R-410a (a 50/50 blend of R-125/R-32), These refrigerants still have global warming potentials thousands of times greater than CO2 and atmospheric lifetimes that can extend for decades.

New refrigerants were developed in the early 21st century that are safer for the environment, but their introduction has been held up due to concerns over toxicity and flammability. HFCs are now being replaced in markets where leaks are likely by using a fourth generation of refrigerants, most prominently HFO-1234yf trademarked by Chemours as Opteon-YF, that have global warming potentials much closer to that of CO2.

As of year 2019, CFCs, HCFCs, and HFCs are responsible for about one-tenth of the direct radiative forcing from all long-lived anthropogenic greenhouse gases. A 2018 study by the nonprofit organization "Drawdown" put proper refrigerant management and disposal at the very top of the list of climate impact solutions, with an impact equivalent to eliminating over 17 years of US carbon dioxide emissions.

Compared to halogenated refrigerants, hydrocarbons like isobutane (R-600a) and propane (R-290) offer several advantages: low cost and widely available, zero ozone depletion potential and very low global warming potential. They also have good energy efficiency, but are flammable and can form an explosive mixture with air if a leak occurs. Despite the flammability, they are increasingly used in domestic refrigerators. EU and US regulations set maximum charges of 57 or 150 grams of refrigerant, keeping the concentration in a standard kitchen below 20% of the lower explosive limit. The LEL can be exceeded inside the appliance, so no potential ignition sources can be present. Switches must be placed outside the refrigerated compartment or replaced by sealed versions, and only spark-free fans can be used. In 2010, about one-third of all household refrigerators and freezers manufactured globally used isobutane or an isobutane/propane blend, and this was expected to increase to 75% by 2020.

Chlorofluorocarbons were little used for refrigeration until better synthesis methods, developed in the 1950s, reduced their cost. Their domination of the market was called into question in the 1980s by concerns about depletion of the ozone layer.

Following legislative regulations on ozone depleting chlorofluorocarbons (CFCs) and hydrochlorofluorocarbons (HCFCs), substances used as substitute refrigerants such as perfluorocarbons (FCs) and hydrofluorocarbons (HFCs) have also come under criticism. They are currently subject to prohibition discussions on account of their harmful effect on the climate. In 1997, FCs and HFCs were included in the Kyoto Protocol to the Framework Convention on Climate Change. In 2006, the EU adopted a Regulation on fluorinated greenhouse gases, which makes stipulations regarding the use of FCs and HFCs with the intention of reducing their emissions. The provisions do not affect climate-neutral refrigerants. Hydrocarbons are seeing increasing use as refrigerants.

Refrigerants such as ammonia (R717), carbon dioxide and non-halogenated hydrocarbons do not deplete the ozone layer and have no (ammonia) or only a low (carbon dioxide, hydrocarbons) global warming potential. They are used in air-conditioning systems for buildings, in sport and leisure facilities, in the chemical/pharmaceutical industry, in the automotive industry and above all in the food industry (production, storage, marine shipping, retailing). In these settings their toxicity is less a concern than in home equipment.

Emissions from automobile air conditioning are a growing concern because of their impact on climate change. From 2011 on, the European Union will phase out refrigerants with a global warming potential (GWP) of more than 150 in automotive air conditioning (GWP = 100 year warming potential of one kilogram of a gas relative to one kilogram of CO2). This will ban potent greenhouse gases such as the refrigerant HFC-134a (also known as R-134a in North America) —which has a GWP of 1410—to promote safe and energy-efficient refrigerants.

One of the most promising alternatives is CO2 (R-744). Carbon dioxide is non-flammable, non-ozone depleting, has a global warming potential of 1. R-744 can be used as a working fluid in climate control systems for cars, residential air conditioning, hot water pumps, commercial refrigeration, and vending machines. R12 is compatible with mineral oil, while R134a is compatible with synthetic oil that contains esters. GM announced that it would start using "hydrofluoroolefin", HFO-1234yf, in all of its brands by 2013. Dimethyl ether (DME) is also gaining popularity as a refrigerant, but like propane, it is also dangerously flammable.

Some refrigerants are seeing rising use as recreational drugs, leading to an extremely dangerous phenomenon known as inhalant abuse.

Under Section 608 of the United States' Clean Air Act it is illegal to knowingly release refrigerants into the atmosphere. SNAP approved hydrocarbon substitutes (isobutane and propane: R600a, R441a and R290), ammonia and CO2 are exempt from the venting prohibition.

When refrigerants are removed they should be recycled to clean out any contaminants and return them to a usable condition. Refrigerants should never be mixed together outside of facilities licensed to do so for the purpose of producing blends. Some refrigerants must be managed as hazardous waste even if recycled, and special precautions are required for their transport, depending on the legislation of the country's government.

Various refrigerant reclamation methods are in use to recover refrigerants for reuse.

Refrigerants by class and R-number

Refrigerants may be divided into three classes according to their manner of absorption or extraction of heat from the substances to be refrigerated:

The R-# numbering system was developed by DuPont (which owned the Freon trademark), and systematically identifies the molecular structure of refrigerants made with a single halogenated hydrocarbon. The meaning of the codes is as follows: 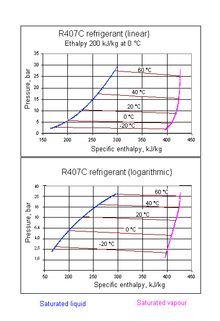 Below are some notable blended HFC mixtures. There exist many more (see list of refrigerants). All R-400 (R-4xx) and R-500 (R-5xx) hydroflurocarbons are blends, as noted above.

Air as a refrigerant

Air has been used for residential, automobile, and piston- and turbine-powered aircraft air-conditioning and/or cooling. Air is not more widely used as a general-purpose refrigerant because there is no change of phase, and is therefore too inefficient to be practical in most applications. It has been suggested that with suitable compression and expansion technology, air can be a practical (albeit not the most efficient) refrigerant, free of the possibility of environmental contamination or damage, and almost completely harmless to plants and animals.

However, an explosion could result from vapors or atomized refrigerant-type compressor lubricating oils being compressed together with air, in a process similar to a diesel engine.

Retrieved from "https://en.wikipedia.org/w/index.php?title=Refrigerant&oldid=1003100134"
Uses material from the Wikipedia article Refrigerant, released under the CC BY-SA 3.0 license.