A regent (from the Latin regens: ruling, governing) is a person appointed to govern a state because the monarch is a minor, is absent, or is incapacitated. The rule of a regent or regents is called a regency. A regent or regency council may be formed ad hoc or in accordance with a constitutional rule. Regent is sometimes a formal title. If the regent is holding his position due to his position in the line of succession, the compound term prince regent is often used; if the regent of a minor is his mother, she is often referred to as queen regent.

If the formally appointed regent is unavailable or cannot serve on a temporary basis, a regent ad interim may be appointed to fill the gap.

In a monarchy, a regent usually governs due to one of these reasons, but may also be elected to rule during the interregnum when the royal line has died out. This was the case in the Kingdom of Finland and the Kingdom of Hungary, where the royal line was considered extinct in the aftermath of World War I. In Iceland, the regent represented the King of Denmark as sovereign of Iceland until the country became a republic in 1944. In the Polish-Lithuanian Commonwealth (1569–1795), kings were elective, which often led to a fairly long interregnum. In the interim, it was the Roman Catholic primate (the archbishop of Gniezno) who served as the regent, termed the interrex (Latin: ruler 'between kings' as in ancient Rome). In the small republic of San Marino, the two Captains Regent, or Capitani Reggenti, are elected semi-annually (they serve a six-month term) as joint heads of state and of government.

Famous regency periods include that of the Prince Regent, later George IV of the United Kingdom, giving rise to many terms such as Regency era and Regency architecture. Strictly this period lasted from 1811 to 1820, when his father George III was insane, though when used as a period label it generally covers a wider period. Philippe II, Duke of Orléans was Regent of France from the death of Louis XIV in 1715 until Louis XV came of age in 1723; this is also used as a period label for many aspects of French history, as Régence in French, again tending to cover a rather wider period than the actual regency. The equivalent Greek term is epitropos (επίτροπος), meaning overseer.

As of 2019,[update] Liechtenstein (under Alois, Hereditary Prince of Liechtenstein) is the only country with an active regency. 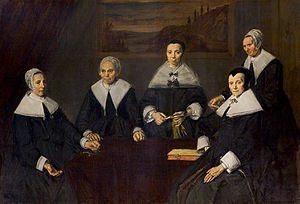 Regentesses of the Old Men's Almshouse in Haarlem, Frans Hals, 1664

The term regent may refer to positions lower than the ruler of a country. The term may be used in the governance of organisations, typically as an equivalent of "director", and held by all members of a governing board rather than just the equivalent of the chief executive. Some university managers in North America are called regents and a management board for a college or university may be titled the "Board of Regents". In New York State, all activities related to public and private education (P-12 and postsecondary) and professional licensure are administered by the Board of Regents of the University of the State of New York, the appointed members of which are called regents. The term "regent" is also used for members of governing bodies of institutions such as the national banks of France and Belgium.

In the Dutch Republic, the members of the ruling class, not formally hereditary but forming a de facto patrician class, were informally known collectively as regenten (the Dutch plural for regent) because they typically held positions as "regent" on the boards of town councils, as well as charitable and civic institutions. The regents group portrait, regentenstuk or regentessenstuk for female boards in Dutch, literally "regents' piece", is a group portrait of the board of trustees, called regents or regentesses, of a charitable organization or guild. This type of group portrait was popular in Dutch Golden Age painting during the 17th and 18th centuries. In the Dutch East Indies, a regent was a native prince allowed to rule de facto colonized 'state' as a regentschap (see that term). Consequently, in the successor state of Indonesia, the term regent is used in English to mean a bupati, the head of a kabupaten (second level local government).

Again in Belgium and France, (Régent in French, or in Dutch) Regent is the official title of a teacher in a lower secondary school (junior high school), who does not require a college degree but is trained in a specialized école normale (normal school). In the Philippines, specifically, the University of Santo Tomas, the Father Regent, who must be a Dominican priest and is often also a teacher, serves as the institution's spiritual head. They also form the Council of Regents that serves as the highest administrative council of the university. In the Society of Jesus, a regent is an individual training to be a Jesuit and who has completed his Novitiate and Philosophy studies, but has not yet progressed to Theology studies. A regent in the Jesuits is often assigned to teach in a school or some other academic institution as part of the formation toward final vows.

In one of the two greatest epics of India, the Mahabharata, we find the following in the earliest chapter: after the King Santanu had died, Devavrata (alias Bheeshma) the king's 8th son [and the only surviving son] through the celestial Ganga, ruled the kingdom as the Regent of Hastinapura (after installing Prince Chitrangada [son of Santanu through the fisher woman Satyavati(alias MatsyaGandhi)] as the YuvaRaja (i.e., crown prince); VichitraVeerya was Chitrangada's younger brother). For an English version of the epic, please refer to the book by Kamala Subramaniam. By virtue of the fact that the epic was reported by Sage Vedavyasa -- we consider him the very 2nd true Reporter of a war, {the very first being Sage Valmiki, the author of the other epic Ramayana} -- about 5000 B.C., this was the 1st recorded case of a regent ruling a kingdom.

Uses material from the Wikipedia article "Regent", released under the CC BY-SA 3.0 license.