The Archdiocese of Philadelphia is an ecclesiastical territory or diocese of the Catholic Church in southeastern Pennsylvania, in the United States. It covers the City and County of Philadelphia as well as Bucks, Chester, Delaware, and Montgomery counties. The diocese was erected by Pope Pius VII on April 8, 1808, from territories of the Archdiocese of Baltimore. Originally the diocese included all of Pennsylvania, Delaware, and seven counties and parts of three counties in New Jersey. The diocese was raised to the dignity of a metropolitan archdiocese on February 12, 1875. The seat of the archbishop is the Cathedral-Basilica of Ss. Peter & Paul.

It is also the Metropolitan See of the Ecclesiastical Province of Philadelphia, which includes the suffragan episcopal sees of Allentown, Altoona-Johnstown, Erie, Greensburg, Harrisburg, Pittsburgh, and Scranton. The territory of the province is coextensive with the state of Pennsylvania.

History of the archdiocese

The history of the Catholic Church in the area dates back to William Penn and when Mass was said publicly as early as 1707. On April 8, 1808, the suffragan dioceses of Boston, New York, Philadelphia, and Bardstown (moved to Louisville in 1841) were erected by Pope Pius VII from the territory of the Diocese of Baltimore, which was simultaneously raised to the rank of metropolitan archdiocese. Michael Egan was appointed as the first bishop and was consecrated as a bishop on October 28, 1810, by Archbishop John Carroll. 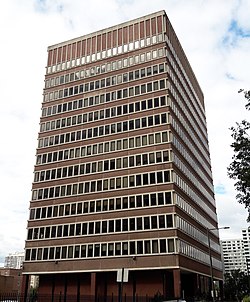 In 1868, the dioceses of Harrisburg, Scranton, and Wilmington were erected from the territory of the diocese (the Wilmington diocese also received parts of Maryland and Virginia). Philadelphia was raised to a metropolitan archiepiscopal see on February 12, 1875, with Harrisburg and Scranton among its suffragan dioceses. On January 28, 1961, the five northern counties of Berks, Carbon, Lehigh, Northampton, and Schuylkill were split off from the archdiocese, to create the Diocese of Allentown.

In February 2012, the diocese announced the largest reorganization of their elementary and high school education system, with numerous recommended school closings and/or mergers.

In a Thursday, August 23, 2012 online news story article about the Archdiocese's schools by Lou Baldwin of Catholic News Service (CNS), it was announced that the Faith in the Future Foundation would assume management of the seventeen archdiocesan high schools and the four special education schools.

The sexual abuse scandal in the Catholic Archdiocese of Philadelphia, in Pennsylvania, U.S., is a significant episode in the series of Catholic sex abuse cases in the United States, Ireland and elsewhere. The Philadelphia abuses were substantially revealed through a grand jury investigation in 2005. In early 2011, a new grand jury reported extensive new charges of abusive priests active in the archdiocese. In 2012, a guilty plea by priest Edward Avery and the related trial and conviction of Monsignor William Lynn and mistrial on charges against Rev. James J. Brennan followed from the grand jury's investigations. In 2013, Rev. Charles Engelhardt and teacher Bernard Shero were tried, convicted and sentenced to prison. Lynn was the first official to be convicted in the United States of covering up abuses by other priests in his charge and other senior church officials have been extensively criticized for their management of the issue in the archdiocese.

On March 12, 2020, a new trial date was official set for Lynn, who was released and ordered to be retried in 2016 after serving 33 months of his sentence, with jury selection to start March 16. However, the ongoing coronavirus pandemic forced Lynn's retrial to be delayed until January 2021. Following his release from prison in 2016, Lynn was ordered to remain on supervised parole until his retrial. In 2019, it was reported that the 2011 grand jury report also resulted in Lynn being suspended from ministry.

On May 5, 2020, Archdiocese of Philadelphia announced that it now expected to pay $126 million in reparations. The archdiocese also said its Independent Reconciliation and Reparations Program, which was established in 2018, has received a total of 615 claims, and had settled 208 of them for $43.8 million as of April 22, 2020. That averages out to about $211,000 per claim, which is in line with what other dioceses have been paying under similar programs. The same day, however, the total number of money which the Archdiocese of Philadelphia expects to pay in sex abuse settlements was soon revised to $130 million by Archbishop of Philadelphia Nelson J. Perez. On August 14, 2020, it was revealed that the Archdiocese of Philadelphia and its suffragan dioceses of Pittsburgh, Allentown and Scranton were enduring the bulk of 150 new lawsuits filed against all eight Pennsylvania Catholic dioceses.

On December 3, 2020, William McCandless, a member of the Wilmington-based religious order Oblates de St. Francis De Sales who was formerly assigned to DeSales University in Lehigh County, was charged in Philadelphia for possession of child pornography. He also served as an adviser to Monaco’s royal family, Grace Kelly, the late mother of Monaco's leader Prince Albert, was also a native of Philadelphia. Much of McCandless' child pornography was imported from overseas as well. McCandless has been ordered to remain under house arrest until the outcome of his trial.

In 2015, it was reported that the school's director of religious education, Margie Winters, had been fired from the Waldron Mercy Academy after a parent had reported her directly to the Archdiocese of Philadelphia for marrying her long-term lesbian partner in a civil ceremony in 2007. Winters had been upfront with school administrators at the time of her hiring and was advised to keep a low profile which she says she did. Many parents expressed anger and concern over the school's decision. Principal Nell Stetser justified the decision by arguing that "many of us accept life choices that contradict current Church teachings, but to continue as a Catholic school, Waldron Mercy must comply with those teachings." But she called for "an open and honest discussion about this and other divisive issues at the intersection of our society and our Church." The Archbishop of Philadelphia, Charles Chaput, called the dismissal "common sense." On January 23, 2020, Pope Francis accepted Chaput's letter of resignation and appointed Cleveland Bishop Nelson Perez to succeed Chaput as Archbishop of Philadelphia on February 18, 2020. After his installation on February 18, 2020, Nelson Perez became the first Hispanic Archbishop of Philadelphia

Other living priests of this diocese who became bishops

Other deceased priests of this diocese who became bishops

Main article: List of churches in the Roman Catholic Archdiocese of Philadelphia

Main article: List of schools in the Roman Catholic Archdiocese of Philadelphia

Circa 1912 there were about 68,000 students in Catholic schools within the archdiocesan territory. This increased to 250,000 in 1961, but the figures decreased after that year. Enrollment was down to 68,000 in 2012. There were about 50,000 students in Catholic schools in the city of Philadelphia in 2000, and this figure decreased to 30,000 in 2010. In that span one Catholic high school and 23 Catholic elementary schools closed or merged, and the proliferation of charter schools in that period meant that the number of students combined in that type of school outnumbered that of the remaining Philadelphia Catholic schools.

In 2012 the archdiocese proposed closing or merging 18 schools in Philadelphia and 31 schools outside of Philadelphia; the Philadelphia Inquirer stated this would further weaken Philadelphia's middle class. The proposal would affect 24% and 29% of the senior high and K-8 schools, respectively.

With the foundation of Archbishop Ryan School for Children with Deafness in 1912, the Archdiocese of Philadelphia school system began serving families of children with special needs. St. Katherine Day School and Our Lady of Confidence School, serving students with mental retardation, were opened in 1953 and 1954 respectively, after parent petitions to John Cardinal O'Hara. St. Lucy Day School for Children with Visual Impairment followed in 1955. Queen of the Universe Day Center was added in 1980 to serve students with mental retardation in Bucks County. These five schools are supported by the Catholic Charities Appeal.

High schools within the archdiocese

Leadership within the Archdiocese of Philadelphia envisioned a continued comprehensive education for secondary students.

The first free Catholic high school in the United States was the "Roman Catholic High School of Philadelphia", founded for the education of boys in 1890. (It is often referred to as "Roman Catholic", occasionally as "Catholic High", and most commonly as "Roman".) The "Catholic Girls High School" was founded in 1912. Mary McMichan, one of the school's founders, requested in her last will that the school be renamed in honor of her brother. The school became "John W. Hallahan Catholic Girls High School" after her death. Both schools are still in existence.

Colleges and universities within the archdiocese

Note: Each Catholic college and university within the archdiocese is affiliated with a religious institute, rather than the Archdiocese of Philadelphia.

The Archdiocese has had a foster care agency for more than 100 years. It sued Philadelphia after the city stopped referring foster care cases to the agency after it refused to use same-sex couples to foster children. The case went to the Supreme Court with the name Fulton v. City of Philadelphia, Pa

Retrieved from "https://en.wikipedia.org/w/index.php?title=Roman_Catholic_Archdiocese_of_Philadelphia&oldid=1007349245"
Uses material from the Wikipedia article Roman Catholic Archdiocese of Philadelphia, released under the CC BY-SA 3.0 license.