Street in Pennsylvania, United States of America
This article is about the section of U.S. Route 1 in the Philadelphia area. For the entire length of the highway, see U.S. Route 1.

Historically, Roosevelt Boulevard is a part of the Lincoln Highway, the first road across America, which ran for 3,389 miles (5,454 km) from Times Square in New York City to Lincoln Park on the Pacific Ocean in San Francisco, California.

Today, Roosevelt Boulevard is designated as US 1 (north of the Roosevelt Expressway), US 13 (between Hunting Park Avenue and Robbins Street), and Pennsylvania Route 63 (between Red Lion and Woodhaven Roads).

The road is notorious for two intersections which have been designated the second and third most dangerous intersections in the country by State Farm Insurance, at Red Lion Road and Grant Avenue respectively. The dangerous reputation of the road led to installation of the first red light cameras in Philadelphia in 2004. The road has been the scene of numerous pedestrian casualties and studies are underway to allow pedestrian traffic to be separated from vehicular traffic. 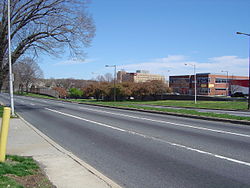 The road continues east through Hunting Park and Feltonville, where it curves and starts running in a northeasterly direction. It meets Oxford Avenue (Pennsylvania Route 232) at a large traffic circle known as Oxford Circle (the express lanes pass through the circle via an underpass). The road carries northbound U.S. Route 13 one more mile until it splits off onto Robbins Street and Levick Street (both one-way streets). The road continues to a large interchange with Cottman Avenue (Pennsylvania Route 73) and the Roosevelt Mall. The traffic circle with Holme and Solly Avenues known as the Pennypack Circle was rebuilt and no longer exists. There is access to both Solly and Holme Avenues from the local lanes both north and south bound. It continues past Pennypack Park and Northeast Philadelphia Airport, passing through two notoriously dangerous intersections with Grant Avenue and Red Lion Road.

The road continues northeast, interchanging with Woodhaven Road (Pennsylvania Route 63), then narrowing as it approaches its end at an intersection on the Philadelphia-Bucks County border. After 2 traffic light intersections in Trevose in Bensalem Township, U.S. 1 continues as a freeway to the north.

The Boulevard Direct, a limited-stop bus route that operates along a portion of Roosevelt Boulevard

The Roosevelt Boulevard Subway is a proposed SEPTA subway line that would run along Roosevelt Boulevard. The route was first proposed in 1913 as part of the Broad Street Subway line from Adams Avenue. Its construction has been considered at a variety of points in Philadelphia's history. Last studied in detail in 2003, a plethora of alignments and construction options were considered; including within the median of a highway that would replace the Boulevard, an alternate route that would follow and replace the current Fox Chase Line of SEPTA Regional Rail, and an at grade route that would function similarly to the city's subway-surface network. A largely underground alignment under the Boulevard was chosen that would have left the current Broad Street Line at Erie, using an already extant flying junction with the express tracks. It would have then tunneled to Roosevelt Boulevard and been constructed cut and cover until Blue Grass road near the northern edge of Philadelphia. From there its would have been on an elevated structure until almost reaching the county line. Additionally a cut and cover extension of the Market-Frankford Line was to be constructed under Bustleton Avenue until intersecting with the Boulevard. Cost estimates ranged between $2.5 and $3.4 billion in year 2000 dollars. Largely dependent on if constructing all stations in open cuts, rather than strictly underground, was feasible. It was estimated to draw 124,523 daily boardings, approximately the current ridership of the Broad Street Line, and divert 83,300 daily automobile trips. The project however did not move forward due to lack of local financing. 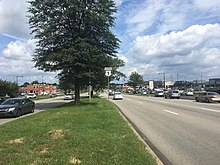 Proposed in 1903 by Mayor Samuel H. Ashbridge as part of the City Beautiful movement, the 300-foot-wide thoroughfare originally extended from Broad Street to the Torresdale neighborhood, and was first named Torresdale Boulevard, then Northeast Boulevard in 1914 when the road was completed. On its extension to Pennypack Creek in 1918, it was finally renamed to Roosevelt Boulevard, in honor of Theodore Roosevelt. The road was designated U.S. 1 in 1926, and was extended through Philadelphia to neighboring Bucks County in the post-World War II years.

The Roosevelt Expressway was built to connect the boulevard with the nearby Schuylkill Expressway (I-76).

In 2000, by act of the state legislature, the Boulevard was designated the "Police Officer Daniel Faulkner Memorial Highway" in memory of Daniel Faulkner, a Philadelphia police officer whom Mumia Abu-Jamal was convicted of having slain in the line of duty in 1981. The designation is alongside the roadway's official name of Roosevelt Boulevard.

There have been several plans to change the boulevard into an expressway-like artery, like the Roosevelt Expressway itself, and construct a subway underneath the boulevard, but no such plans have been acted upon.

Today, Roosevelt Boulevard is among the most congested arteries in the country. According to a 2001 report by State Farm Insurance, the second- and third-worst intersections in the country are both found on the Boulevard, at Red Lion Road and Grant Avenue, respectively, only a mile apart from each other. Red light cameras have been installed at these intersections, as well as Cottman Avenue, and have been operational since June 1, 2005. New cameras installed at the intersections with 9th Street, Mascher Street, Levick Street, Rhawn Street, Welsh Road, and Southampton Road became operational in summer 2007. Additional plans include adding cameras at Devereaux Avenue and Tyson Avenue. On June 1, 2020, speed cameras were activated along Roosevelt Boulevard, with a 60-day warning period before fines are issued.