A salt evaporation pond is a shallow artificial salt pan designed to extract salts from sea water or other brines. Natural salt pans are geological formations that are also created by water evaporating and leaving behind salts. Some salt evaporation ponds are only slightly modified from their natural version, such as the ponds on Great Inagua in the Bahamas, or the ponds in Jasiira, a few kilometres south of Mogadishu, where seawater is trapped and left to evaporate in the sun.

The seawater or brine is fed into large ponds and water is drawn out through natural evaporation which allows the salt to be subsequently harvested.

The ponds also provide a productive resting and feeding ground for many species of waterbirds, which may include endangered species. The ponds are commonly separated by levees. Salt evaporation ponds may also be called salterns, salt works or salt pans. 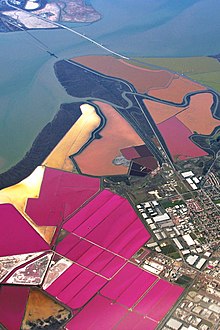 Due to variable algal concentrations, vivid colors (from pale green to bright red) are created in the evaporation ponds. The color indicates the salinity of the ponds. Microorganisms change their hues as the salinity of the pond increases. In low- to mid-salinity ponds, green algae such as Dunaliella salina are predominant, although these algae can also take on an orange hue. In middle- to high-salinity ponds, Halobacteria, which is actually a group of halophilic Archaea (sometimes called Haloarchaea), shift the colour to pink, red and orange. Other bacteria such as Stichococcus also contribute tints.

Until World War II, salt was extracted from sea water in a unique way in Egypt near Alexandria. Posts were set out on the salt pans and covered with several feet of sea water. In time the sea water evaporated, leaving the salt behind on the post, where it was easier to harvest.

Salt pans are shallow open, often metal, pans used to evaporate brine. They are usually found close to the source of the salt. For example, pans used in the solar evaporation of salt from sea water are usually found on the coast, while those used to extract salt from solution-mined brine will be found near to the brine shaft. In this case, extra heat is often provided by lighting fires underneath.