Border crossing between Mexico and the U.S.

The San Ysidro Port of Entry (aka San Ysidro Land Port of Entry or San Ysidro LPOE) is the largest land border crossing between San Diego and Tijuana, and the fourth-busiest land border crossing in the world (second-busiest if one excludes the crossings between Mainland China and its two Special Administrative Regions) with 70,000 northbound vehicles and 20,000 northbound pedestrians crossing each day, in addition to southbound traffic. It connects Mexican Federal Highway 1 on the Mexican side with Interstate 5 on the American side. The San Ysidro Port of Entry is one of three ports of entry in the San Diego–Tijuana metropolitan region.

There is a northbound and southbound vehicle crossing, as well as two separate bidirectional pedestrian crossings.

There are currently 25 northbound vehicle lanes to cross from Mexico to the U.S. which will increase to 34 lanes (and 62 booths) when the expansion project is complete.

The southbound lanes of Interstate 5 which take vehicles into Mexico have been moved west of their previous location through the new El Chaparral Point of Entry (Spanish: Puerta México el Chaparral). This relocation and expansion was necessary to provide space for the construction of new administrative and border inspection facilities and to increase the number of northbound vehicle lanes. The El Chaparral gateway also has a vehicle and passenger inspection station at which U.S. officials may conduct inspections of southbound traffic, and provides for more thorough inspection of southbound traffic by Mexican officials. El Chaparral was the name of the Tijuana border crossing prior to the 1983 modifications.

Pedestrians may cross northbound immediately east of the northbound vehicle crossing. As of May 2017 they are temporarily processed in the Milo building while a new facility is built to the west. There are currently 15 pedestrian lanes, and more will be added with the current expansion project.

The eastern (main) southbound pedestrian crossing is east of the northbound crossing, immediately south of the San Ysidro trolley station. Pedestrians pass through the 6.9-million-dollar, three-story Puerta Este México-San Ysidro building, opened in August 2015, containing Mexican passport control and customs which since late 2017 exits to a path leading to Frontera street just southwest of Ferrocarril street. Prior to 2012 the southbound pedestrian crossing was west of the northbound vehicle crossing and exited to a bridge leading to Plaza Viva Tijuana.

The PedWest pedestrian crossing is located at the east side of the Las Americas outlet mall where Virginia Avenue dead-ends at the border, immediately west of the El Chaparral port of entry into Mexico. On the Mexican side a walkway connects PedWest southeastward, ending across the street from the Plaza Viva Tijuana mall, from which there is a bridge to Downtown Tijuana. PedWest opened for northbound pedestrians in July 2016 and July 31, 2017 for southbound pedestrians. PedWest improved efficiency as now 63,000 people pass through it each day. There are 10 northbound and 2 reversible lanes. This has also become a better alternative for pedestrian traffic, due to the Southbound I-5 re-alignment.

There has been a land border inspection station in the community of San Ysidro since the early 20th century. 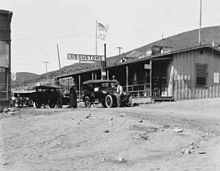 Cars, pedestrians, trucks and trains have been inspected at this crossing. In the 1950s, due to congestion, truck traffic was moved a short distance west to a crossing at Virginia Avenue. Then in 1983, the Otay Mesa Port of Entry was opened and all truck traffic is now inspected there. In 1933 the NRHP-listed Old Customs House was built in Mission Revival style, and still stands housing offices.

The 1933 Mission Revival-style Old Customs House, in a photo from 1981

The current San Ysidro Land Port of Entry facility was constructed in the 1970s to meet the needs of the time and the projected growth in the coming years. This port is considered the busiest international port of entry in the world in terms of individual crossers and vehicle movements from one country to another.

With over 90,000 daily commuters crossing between Tijuana and San Diego, commuting has become a challenge for everyday commuters in the metropolitan region; visitors to and from Baja California spend one to three, and as many as five, hours waiting to enter into the United States. U.S. Border and Customs officials have said that newly implemented inspection technology and properly processing the large number of persons and vehicles who go through the port on a daily basis have resulted in long lines and long wait times.

On Sunday, November 25, 2018, groups of Central American migrants tried to forcibly cross the border into the United States. Some of them threw rocks at US Border Patrol agents, who responded by firing tear gas into the crowd which included families with small children. The firing of tear gas across the international border into Mexico was immediately protested by the Foreign Ministry of Mexico, which demanded a full investigation.

The San Ysidro Land Port of Entry Expansion Project is a bi-national effort between the United States and Mexican governments which aims for the demolition, relocation, expansion, renovation, modernization and construction of new administrative and operational facilities of the current land port of entry in the San Ysidro district of San Diego. The project calls for a complete overhaul of the current international border inspection facilities on both sides of the border at a total cost of about $625 million which includes $577 million for the expansion of the northbound U.S. point of entry and roughly $48 million (MXN $598) for the construction of an entirely new southbound Mexican point of entry.

The project is being carried out in three phases:

After the completion of the expansion project, the total northbound lanes is expected to be 62 automobile lanes. This will also add 110,000 square feet of energy preserving and producing material. Not only is there an expected increase in lanes, but an increase in efficiency to S.E.N.T.R.I. (Secure Electronic Network for Travelers Rapid Inspection) system.

Prior to September 2012, pedestrians walked from the U.S. to Mexico by crossing a pedestrian bridge, entering Mexico to the west of Interstate 5, and walking through a corridor leading to the west side of the crossing (Avenida de la Amistad). Then a temporary pedestrian crossing facility was built on the Mexican side on the east side of the crossing. This was replaced when in August 2015 Mexico inaugurated a new pedestrian crossing facility to the east of the northbound traffic lanes. For the first time foreigners are required to show passports when entering Mexico at the border, whereas previously they only had to be shown when entering the interior of the country.

On July 15, 2016, the PedWest pedestrian crossing and Virginia Avenue transit center were opened. On the Mexican side a temporary, partially enclosed walkway was opened connecting this crossing southeastward to the pedestrian bridge from Plaza Viva Tijuana that heads southwest to Downtown Tijuana. This walkway was nicknamed "Puente Chicanadas" ("cheap/quick fix bridge") and characterized by some as dangerous, suffocating and embarrassing to Mexico. In September 2016, a definitive walkway from Plaza Viva Tijuana costing 25 million pesos (about 1.3 million dollars at the time), was opened.

Phase III began in September 2017, once the realignment of Southbound Interstate 5 had been completed. Once complete, it will result in an increase from 5 inspection lanes to 10. This project also includes an increase in the Northbound inspection lanes by adding 8 new lanes on the east side of the border crossing. This project does not affect existing pedestrian lanes. Architects Miller Hull Partnership are leading the third phase of the project with a budget of US$150 million.

Retrieved from "https://en.wikipedia.org/w/index.php?title=San_Ysidro_Port_of_Entry&oldid=995779434"
Uses material from the Wikipedia article San Ysidro Port of Entry, released under the CC BY-SA 3.0 license.