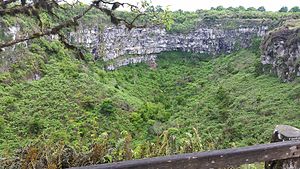 One of the twin craters, Los Gemelos, that bracket Santa Cruz Highway in the highlands

Santa Cruz Island (Spanish pronunciation: [ˈsanta ˈkɾus]) is one of the Galápagos Islands with an area of 986 km2 (381 sq mi) and a maximum altitude of 864 metres (2,835 ft). Situated in the center of the archipelago, Santa Cruz is the second largest island after Isabela. Its capital is Puerto Ayora, the most populated urban centre in the islands. On Santa Cruz, there are some small villages, whose inhabitants work in agriculture and cattle raising.

The island is an oval-shaped, 32 km (20 mi) long and 40 km (25 mi) wide shield volcano. Its summit contains a shallow caldera that has been largely buried by youthful pit craters and cinder cones with well-preserved craters. The most recent eruptions may have occurred only a few thousand years ago with the effusion of sparsely vegetated lava flows from vents on the north flank and along the summit fissure. A gigantic lava tube measuring over 2,000 m (6,600 ft) long is a tourist attraction on the island. As a testimony to its volcanic history there are two big holes formed by the collapse of a magma chamber: Los Gemelos, or "The Twins".

Named after the Holy Cross, its English name (Indefatigable) was given after a British vessel HMS Indefatigable. Santa Cruz hosts the largest human population in the archipelago at the town of Puerto Ayora, with a total of 12,000 residents on the island.

Tortuga Bay is located on the Santa Cruz Island, a short walk from center of Puerto Ayora where you can view marine iguanas, birds, Galapagos crabs and a natural mangrove where you can spot white tip reef sharks and the gigantic Galápagos tortoises.

Panoramic of the beach of Tortuga Bay. 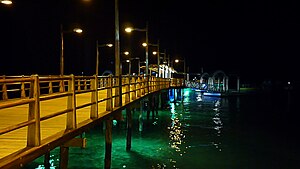 On June 19, 2002 the cities of Seabrook, Texas and Santa Cruz Island finalized a sister city status during a ceremony at Seabrook City Hall.