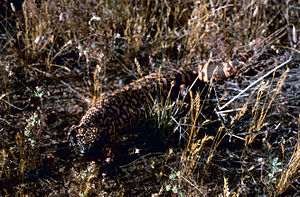 Sasabe (O'odham: Ṣaṣawk) is a small hamlet in the Altar Valley of southern Pima County, Arizona, United States, immediately north of the international border with Mexico. It hosts a minor border crossing, an adobe sales outlet, a public school, a guest ranch, a general store with fuel pumps, a weekend bar, and a post office serving the ZIP Code of 85633. In 2010, the population of the 85633 ZCTA, including Sasabe, was 54.

The name Sasabe is derived from the Native American language of the Tohono O'odham (formerly Papago) meaning "head valley". The post office was established at Sasabe in 1905.

On average, 165 cars, trucks, or pedestrians per day passed through the Sasabe Port of Entry in 2011. Sasabe, Arizona is much smaller than its sister community, El Sásabe, Sonora, which is known for its burnt-adobe brickyards.

Sasabe is seated on an arid, gently rolling sand-plain relieved only by scatter shrub trees and grass hummocks. Much of the area north and east of Sasabe is within the Buenos Aires National Wildlife Refuge. In 2006, 3,500 acres (14 km2) of the refuge that border Mexico east of Sasabe were closed to public entry due to problems with smugglers and unauthorized border crossings.