Aleksander "Sasha" Vujačić (Serbian Cyrillic: Александар Саша Вујачић, Slovene: Aleksander Saša Vujačič, rendered in English as Sasha Vujacic; born March 8, 1984) is a Slovenian former professional basketball player. He was selected by the Los Angeles Lakers in the first round of the 2004 NBA draft with the 27th overall pick. In the 2007–08 season, Vujacic set the Lakers record for the best three-point field goal percentage (.437) in a single season. In the 2009 and 2010 seasons, he won the NBA championship with the Lakers. Vujacic is also a two-time Turkish Basketball League All-Star and a Turkish Basketball League MVP.

From 1998 to 2000, Vujačić played for Branik and Polzela. The following year, he played for the Snaidero Udine junior team, before joining the senior team in 2001.

Vujačić played for the Slovenian junior national team and won a silver medal at the 2002 European Junior Championship.

From 2001 to 2004, Vujačić played for Snaidero Udine of the Italian Lega Basket Serie A.

Vujačić was drafted by the Los Angeles Lakers with the 27th overall pick in the 2004 NBA draft. He signed a multi-year deal with the Lakers on July 20, 2004. He recorded a then-career high 22 points in a win over the Denver Nuggets on November 29, 2007. In the 2007–08 season, Vujačić made 118 of his 270 three-point field goal attempts, setting the Los Angeles Lakers single-season record for the best three-point field goal percentage (.437). During Game 3 of the 2008 NBA Finals, Vujačić scored a career playoff-high 20 points off the bench and was the only Laker, with the exception of Kobe Bryant, to score in double figures. The Lakers went on to lose the series in six games to the Boston Celtics.

On July 28, 2008, Vujačić re-signed with the Lakers on a multi-year deal. Los Angeles made it back to the NBA Finals to face the Orlando Magic. The Lakers defeated the Magic in the 2009 NBA Finals in a 4–1 series, earning Vujacic his first NBA championship.

In Game 6 of the 2010 NBA Finals, Vujačić led the Lakers' bench with 9 points, including two three-pointers. With 11 seconds left in Game 7 and the Lakers leading by two points, Vujačić made two free throws that sealed the Lakers' victory over the Celtics in a Game 7 for the first time in the longstanding Lakers-Celtics rivalry.

On December 15, 2010, Vujačić was traded to the New Jersey Nets in a three-team trade involving the Lakers and Houston Rockets. Vujačić tied his career high of 22 points on January 1, 2011. On February 9, 2011, Vujačić set a new career high with 25 points in a win over the then New Orleans Hornets. 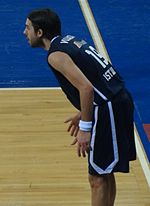 In July 2011, he signed a one-year contract with the option for another year with Anadolu Efes. In his first Euroleague season he averaged 13.9 points and 3.3 rebounds per game.

On August 6, 2012, it was confirmed that Vujačić would stay with the team for one more season. In a Euroleague game against EA7 Milano on November 16, he scored 29 points, leading his team to a 77–71 victory. He averaged 12.8 points and 2.7 rebounds per game across ten regular season games. Vujačić helped Efes advance to the Top 16 round, edging Cedevita on the road by 81–73 in one of the most crucial games in group C.

On March 25, 2014, Vujačić signed with Italian team Reyer Venezia Mestre for the rest of the 2013–14 season. He played 5 matches with the team, scoring 11 points per game.

On January 2, 2015, he signed with İstanbul BB of Turkey for the rest of the 2014–15 Turkish Basketball League season. 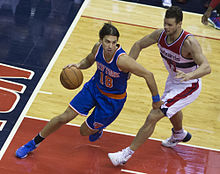 Vujačić (left) playing for the Knicks in 2015

Vujačić re-signed with the Knicks on July 14, 2016. On February 1, 2017, he made Knicks history by converting two four-point plays during the Knicks 95–90 win over the Brooklyn Nets.

Vujačić signed with Italian club Auxilium Torino for the 2017–18 season on August 29, 2017. On February 18, 2018, Vujačić scored the game-winning layup to win the 2018 edition of the Italian Basketball Cup with Fiat Torino, beating Germani Basket Brescia 69–67 in the Finals.

In 2010, Vujacic and his family harvested the first grapes at their boutique winery, S&G Estate, located in Paso Robles, California. The winery specializes in Bordeaux-style blends that are marketed under the label Aleksander Wine, which was officially launched in 2017. Some of the early vintages have scored highly in wine reviews, with the 2011 vintage earning a 95/100 rating by Wine Enthusiast. The name ‘Aleksander’ was chosen by the family and inspired by Vujacic's official birth-name.

Vujacic is not the only NBA athlete to own a wine label. Dwyane Wade and Yao Ming also produce wines under their own labels.

In 2018, Vujacic became the official Ambassador of the new Japanese basketball team, Saga Ballooners. In his capacity as Ambassador, Vujacic oversees the Ballooners basketball operations and helps to promote the sport of basketball in Japanese culture. In the same year, Vujacic's brother, Aljoša Bjeković, was appointed as Playing Head Coach.

Vujačić was born in Maribor, Slovenia, to a Serbian father and Slovenian mother. His father was a Serbian basketball coach, while his mother Ksenija was a Slovenian volleyball player.

His mother was playing volleyball for a top Yugoslav women's club, Branik Maribor, but quit her career at the age of 19 when she got pregnant with Sasha. His parents divorced when he was 2, and he lived with his mother and stepfather Goran Bjeković . He has two siblings, a sister named Nina, and a brother named Aljosa. In addition to playing basketball, he enjoys volleyball, tennis, and soccer.

He was once engaged to professional tennis player Maria Sharapova, but the two separated in 2012.

In 2020, it was revealed that Vujacic & TV presenter Kristine Leahy were in a relationship.