Saskia Sassen (born January 5, 1947) is a Dutch-American sociologist noted for her analyses of globalization and international human migration. She is Robert S. Lynd Professor of Sociology at Columbia University and Centennial visiting Professor at the London School of Economics. Sassen coined the term global city.

Sassen was born in The Hague, Netherlands in 1947. In 1948 Sassen's parents, Willem Sassen and Miep van der Voort, moved to Argentina and the family lived in Buenos Aires. Her father was a Dutch collaborator with the Nazis, a Nazi journalist, and a member of the Waffen-SS. In the 1950s Willem Sassen was close to Adolf Eichmann when both were living in Argentina, and she recalls him visiting her childhood home. Saskia Sassen also spent part of her youth in Italy and says she was "brought up in five languages."

She is married to sociologist Richard Sennett. Artist Hilary Koob-Sassen is her son from her first marriage.

During the 1980s and 1990s, Sassen emerged as a prolific author in urban sociology. She studied the impacts of globalisation such as economic restructuring, and how the movements of labour and capital influence urban life. She also studied the influence of communication technology on governance. Sassen observed how nation states begin to lose power to control these developments, and she studied increasing general transnationalism, including transnational human migration. She identified and described the phenomenon of the global city. Her 1991 book bearing this title made her a widely quoted author on globalisation. An updated edition of her book was published in 2001. In the early 2000s, Sassen focused on immigration and globalization, with her "denationalization" and "transnationalism" projects (see Bibliography and External Links, below). Her books have been translated into 21 languages. Committee on Italian, European and International Criminal Procedure – Ibrerojur (coordinated by Bruna Capparelli).

Sassen's 1991 book The Global City charts how New York, along with London and Tokyo, became the most important cities in the global economy 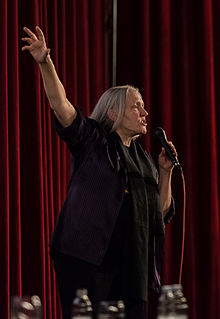 Saskia Sassen at the Subversive Festival