The Securitas depot robbery was a large heist in Tonbridge, Kent, England. It began with a kidnapping on the evening of 21 February 2006 18:30 GMT and ended in the early hours of 22 February, when the criminals left the depot with over £53 million cash. It was the UK's largest cash robbery and the gang left behind another £154 million only because they did not have the room to take it.

After abducting the manager of the depot and his family, the gang forced entry to the depot. Armed with weapons including AK-47 assault rifles and a Škorpion submachine gun, the gang tied up fourteen members of staff and left with £53,116,760 in used and unused Bank of England sterling banknotes. Most of the getaway vehicles were found in the following week, one containing £1.3 million in stolen notes. Another £7 million was recovered in Welling and, by June 2006, over 30 people had been arrested in relation to the crime.

At trial in London, five people were convicted and received long sentences, including Emir Hysenaj, the inside man. Lee Murray, the alleged mastermind of the heist, was arrested in Morocco having incriminated himself in a recording on his mobile phone, which he had abandoned at the site of a car crash. He successfully fought extradition to the UK and eventually was imprisoned in Morocco. As of 2016, £32 million had not been recovered.

On Tuesday 21 February 2006, the manager of the Securitas depot, Colin Dixon, was driving his silver Nissan Almera on the A249. At about 18:30, he was pulled over just outside Stockbury, a village northeast of Maidstone in Kent, by what he thought was an unmarked police car, due to the flashing blue lights behind the front grill. A man approached him in high-visibility clothing and Dixon got into the other car, whereupon he was handcuffed. He was driven west on the M20 motorway to the West Malling bypass, where he was tied up and transferred into a white van which took him to a farm in Staplehurst.

At the same time, Dixon's wife and eight-year-old son were being taken hostage at their home in Herne Bay, after they answered the door to men dressed in police uniforms. The men claimed Dixon had been involved in a car accident before abducting the two and holding them at the Staplehurst farm with the manager. Dixon was told at gunpoint that failure to co-operate would put him and his family in danger.

At around 01:00 on Wednesday 22 February 2006, Dixon, his wife, and his son were taken in a white van to the Securitas depot in Tonbridge. Upon being let in by Dixon, a member of the gang forced staff at gunpoint to open the gates to admit the van and other vehicles. The gang members' faces were hidden by balaclavas and they were armed with handguns, shotguns, AK-47 assault rifles and a Škorpion submachine gun. The family and 14 members of staff were tied up and locked in cash cages.

The gang filled a 7.5 tonne white Renault lorry with £53,116,760 in used and unused Bank of England sterling banknotes. Another £154 million would not fit in the lorry and was left behind when the gang departed at around 02:15. At 03:15 staff triggered an alarm which called the police. The hostages were all unharmed but shaken. The Bank of England was reimbursed £25 million by Securitas the same day, and assured the public that Securitas would make up any additional losses.

The following day (Thursday 23 February 2006) Securitas and their insurers offered a reward of £2 million for any information about the heist, which Crimestoppers stated was the largest reward ever offered in the UK. Kent Police said the heist had been meticulously planned by organised crime and that at least £20 million had been stolen, possibly as much as £50 million. By the evening of 23 February 2006, two arrests had been made in Forest Hill, south London. A man aged 29 and a woman aged 31 were detained at separate houses on suspicion of conspiracy to commit robbery. A third person, a 41-year-old woman, was arrested at a branch of the Portman Building Society in Bromley on suspicion of handling stolen goods. 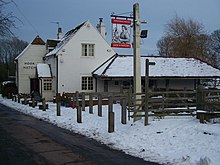 The Hook and Hatchet Pub, Hucking, where the former Parcelforce van was found

Also on the Thursday, police discovered a number of the vehicles involved in the robbery including a former Parcelforce van thought to have been used in the abduction of Colin Dixon and his family, which was found abandoned at the Hook and Hatchet pub in the village of Hucking, near Maidstone. Dixon's Nissan Almera was found in the car park of the Cock Horse pub in Detling. A Volvo S60 and a red Vauxhall Vectra, the cars believed to have been mocked up as police cars, were found near Leeds Castle. The next day, Friday 24 February, metal cages thought to have been used to transport the money were recovered in a field near Detling. Police recovered a white Ford Transit van from the car park of the Ashford International Hotel, after a tip-off from a member of the public. The van and its contents were removed for forensic examination, and on 26 February 2006, it was announced that the van contained £1.3 million, along with guns, balaclavas and body armour.

On the evening of Saturday 25 February 2006, forensic teams and armed police officers raided the houses of Lea Rusha and Jetmir Bucpapa in Southborough near Tunbridge Wells while neither were at home. In Rusha's house police discovered shotgun shells and hand-drawn plans of the depot. On the afternoon of the next day, Kent Police challenged Rusha and Bucpapa on the street in Tankerton, near Whitstable. They fled in a blue BMW 3 Series coupe. The car was halted; some witnesses say police marksmen shot out a tyre while others say a "stinger" device was used. The driver and another man were arrested. On 27 February 2006, two individuals were detained by police in the Greenwich area of London by armed officers. The following day, the white 7.5 ton Renault Midlum lorry believed to have been used to transport the stolen money was recovered by police. The same day, Kent police raided Elderden Farm in the Staplehurst area, conducting extensive forensic searches of the surrounding land and buildings and seizing vehicles.

On 25 June 2006, in a joint operation with local police, four British men were arrested at a shopping centre in Morocco's capital Rabat after a three-month long investigation. Of the four, only Lee Murray, a 26-year-old from Sidcup, south London, was wanted regarding the robbery. Kent Police confirmed his arrest and stated that over 30 people had now been arrested as part of the investigation.

By the year's end, police had asked the Home Office for at least £6 million towards expenditure so far investigating the case and future spending on preparations for trials.

In December 2006, Sean Lupton, who had been released on bail, was recorded as missing, having failed to answer the conditions of his bail. 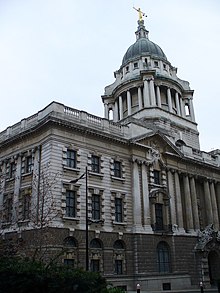 The Old Bailey in London

The trial of eight people began on 26 June 2007 at the Old Bailey in London, The first three weeks of the trial focused on the role of the manager Colin Dixon with the defence cross-examination highlighting 'co-incidences' in his conduct which might be interpreted as suggesting he was the inside man. In fact, the inside man had been Emir Hysenaj, an Albanian man who worked at the depot. He had secretly filmed its layout with a belt camera. Michelle Hogg, who had made prosthetic disguises for the men, decided during the trial to turn Queen's evidence and implicate the others in return for her charges being dropped.

On 28 January 2008, the jury returned guilty verdicts on Stuart Royle, Jetmir Bucpapa, Roger Coutts, Lea Rusha, and Emir Hysenaj. The next day Emir Hysenaj was sentenced to 20 years in prison with an order that he serve a minimum of 10 years. Stuart Royle, Lea Rusha, Jetmir Bucpapa, and Roger Coutts were given life sentences with an order to serve a minimum of 15 years.

In June 2010, Lee Murray was jailed in Morocco for ten years for his part in the robbery; the sentence was later increased to 25 years. The Kent Police Detective, Superintendent Keith Judge, said "I'm pleased Murray will now begin serving a significant prison sentence for his part in the Tonbridge robbery." Former cage-fighter Murray was claimed by other gang members to have been the mastermind behind the heist. He is believed to have worn a prosthesis to impersonate one of the police officers who abducted Dixon, and to be the person dubbed "Stopwatch" by detectives, caught on CCTV directing the robbers to move as fast as possible.

He had fled the UK four days after the heist, but had crashed his car prior to the robbery and left his mobile phone in the wreckage. On the phone was an accidental recording he had made discussing plans for the heist with fellow plotter Lea Rusha. After being arrested in Morocco, Murray successfully fought extradition to the UK on account of his father being Moroccan. In Morocco, Murray and his accomplice Paul Allen had spent their loot on houses, jewellery and narcotics.

Ten years after the heist in 2016, £32 million had not been recovered. The missing money was covered by insurance. Securitas no longer handles cash and sold the Vale Road depot to Vaultex, a company owned jointly by Barclays and HSBC. In the opinion of a former detective superintendent, the cash will have long ago disappeared into organised crime networks.

Kayenide 'Kane' Patterson, whom the police and CPS believe to be a key player in both the robbery and kidnapping, still remains missing and is thought to be residing in the West Indies with a large quantity of the stolen money. In February 2013, Malcolm Constable, who was believed by his brother Derek to be associated with the robbery, was found dead of a self-inflicted shotgun wound. Kent Police stated they had no record of any incidents involving Constable. Paul Allen was shot and severely injured on 11 July 2019 at his home in north London. He was taken to hospital in a critical condition.