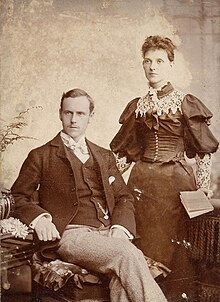 A sepia-toned photograph taken in England in 1895

A digitally sepia-toned image taken in 2007 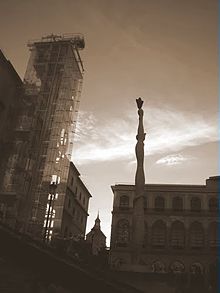 In photography, toning is a method of changing the color of black-and-white photographs. In analog photography, it is a chemical process carried out on silver-based photographic prints. This darkroom process cannot be performed with a color photograph. The effects of this process can be emulated with software in digital photography. Sepia is considered a form of Black and White or Monochromatic Photography.

Most toners work by replacing the metallic silver in the emulsion with a silver compound, such as silver sulfide (Ag2S) in the case of sepia toning. The compound may be more stable than metallic silver and may also have a different color or tone. Different toning processes give different colors to the final print. In some cases, the printer may choose to tone some parts of a print more than others.

Toner also can increase the range of shades visible in a print without reducing the contrast. Selenium toning is especially effective in this regard. Some toning processes can improve the chemical stability of the print, increasing its potential longevity. Other toning processes, such as those including iron and copper, can make the print less stable. Many chemical toners are highly toxic, some even containing chemicals that are carcinogenic. It is therefore extremely important that the chemicals be used in a well ventilated area, and rubber gloves and face protection should be worn when handling them.

Selenium toning may not produce prints quite as stable as sepia or gold toning. Recently, doubts have surfaced as to the effectiveness of selenium toner in ensuring print longevity.

Sepia toning is a specialized treatment to give a black-and-white photographic print a warmer tone and to enhance its archival qualities. The metallic silver in the print is converted to a sulfide compound, which is much more resistant to the effects of environmental pollutants such as atmospheric sulfur compounds. Silver sulfide is at least 50% more stable than silver.

There are three types of sepia toner in modern use;

Incomplete bleaching creates a multi-toned image with sepia highlights and gray mid-tones and shadows. This is called split toning. The untoned silver in the print can be treated with a different toner, such as gold or selenium.

Fred Judge FRPS made extensive use of sepia toning for postcards produced by the British picture postcards manufacturer Judges Postcards.

Metal replacement toners replace the metallic silver, through a series of chemical reactions, with a ferrocyanide salt of a transition metal. Some metals, such as platinum or gold, can protect the image. Others, such as iron (blue toner) or copper (red toner), may reduce the life of the image.

Metal-replacement toning with gold alone results in a blue-black tone. It is often combined with a sepia toner to produce a more attractive orange-red tone. The archival Gold Protective Solution (GP-1) formula uses a 1% gold chloride stock solution with sodium or potassium thiocyanate. It is sometimes used to split tone photographs previously toned in selenium for artistic purposes.

Dye toners replace the metallic silver with a dye. The image will have a reduced lifetime compared with an ordinary silver print.

Toning can be simulated digitally, either in-camera or in post-processing. The in-camera effect, as well as beginner tutorials given for software like Photoshop or GIMP, use a simple tint. More sophisticated software tends to implement sepia tones using the duotone feature. Simpler photo-editing software usually has an option to sepia-tone an image in one step.

The examples below show a digital color photograph, a black-and-white version and a sepia-toned version.

The following are examples of the three types using film: