The Colton Point State Park was listed on the National Register of Historic Places in 1987.

There were 177 households, out of which 30.5% had children under the age of 18 living with them, 67.2% were married couples living together, 5.6% had a female householder with no husband present, and 23.2% were non-families. 20.3% of all households were made up of individuals, and 8.5% had someone living alone who was 65 years of age or older. The average household size was 2.67 and the average family size was 3.04.

The Township is governed by three locally elected Township Supervisors. 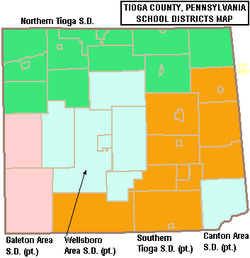 Residents of Shippen Township may attend the local, public schools operated by Wellsboro Area School District which provides full day kindergarten through 12th grade. In 2013, the District's enrollment declined to 1,526 students in kindergarten through 12th grade. In 2013, Wellsboro Area School District ranked 311th out of 498 public schools for academic achievement of its pupils, by the Pittsburgh Business Times.

Shippen Township residents may also apply to attend any of the Commonwealth's 14 public cyber charter schools (in 2013) at no additional cost to the parents. The resident's public school district is required to pay the charter school and cyber charter school tuition for residents who attend these public schools. By Commonwealth law, if the District provides transportation for its own students, then the District must provide transportation to any school that lies within 10 miles of its borders. Residents may also seek admission for their school aged child to any other public school district. When accepted for admission, the student's parents are responsible for paying an annual tuition fee set by the Pennsylvania Department of Education. In 2012, the tuition fees for Wellsboro Area School District were: Elementary School - $8,343.38, High School - $9,951.51.

BLaST Intermediate Unit #17 provides a wide variety of services to children living in its region which includes Shippen Township. Early screening for education related disabilities, special educations services, speech and hearing therapy and many other services like driver education are available. Services for children during the preschool years are provided without cost to their families when the child is determined to meet eligibility requirements.

Community members have access to the Green Free Library in Wellsboro; the Westfield Public Library which is located on Maple Street, in Westfield; the Mansfield Library in Mansfield and to the statewide PA Power Library [1] which is an online library funded with tax dollars from the state's education budget.

Mansfield University of Pennsylvania is a state university located in Mansfield, Tioga County, Pennsylvania. Residents may take courses at a discounted tuition rate for state residents.