Siege by the Romans in 70 CE
For other sieges upon the city of Jerusalem, see Siege of Jerusalem.

The Siege of Jerusalem in the year 70 CE was the decisive event of the First Jewish–Roman War, in which the Roman army captured the city of Jerusalem and destroyed both the city and its Temple. The Roman army, led by the future Emperor Titus, with Tiberius Julius Alexander as his second-in-command, besieged and conquered the city of Jerusalem, which had been controlled by Judean rebel factions since 66 CE, following the Jerusalem riots of 66, when the Judean provisional government was formed in Jerusalem.

The siege of the city began on 14 April 70 CE, three days before the beginning of Passover that year. The siege lasted for about five months; it ended in August 70 CE on Tisha B'Av with the burning and destruction of the Second Temple. The Romans then entered and sacked the Lower City. The Arch of Titus, celebrating the Roman sack of Jerusalem and the Temple, still stands in Rome. The conquest of the city was complete on approximately 8 September 70 CE.

Josephus places the siege in the second year of Vespasian, which corresponds to year 70 of the Common Era.

Despite early successes in repelling the Roman sieges, the Zealots fought amongst themselves, and they lacked proper leadership, resulting in poor discipline, training, and preparation for the battles that were to follow. At one point they destroyed the food stocks in the city, a drastic measure thought to have been undertaken perhaps in order to enlist a merciful God's intervention on behalf of the besieged Jews, or as a stratagem to make the defenders more desperate, supposing that was necessary in order to repel the Roman army.

Titus began his siege a few days before Passover, on 14 April, surrounding the city with three legions (V Macedonica, XII Fulminata, XV Apollinaris) on the western side and a fourth (X Fretensis) on the Mount of Olives, to the east. If the reference in his Jewish War at 6:421 is to Titus' siege, though difficulties exist with its interpretation, then at the time, according to Josephus, Jerusalem was thronged with many people who had come to celebrate Passover.

The thrust of the siege began in the west at the Third Wall, north of the Jaffa Gate. By May, this was breached and the Second Wall also was taken shortly afterwards, leaving the defenders in possession of the Temple and the upper and lower city. The Jewish defenders were split into factions: John of Gischala's group murdered another faction leader, Eleazar ben Simon, whose men were entrenched in the forecourts of the Temple. The enmities between John of Gischala and Simon bar Giora were papered over only when the Roman siege engineers began to erect ramparts. Titus then had a wall built to girdle the city in order to starve out the population more effectively. After several failed attempts to breach or scale the walls of the Fortress of Antonia, the Romans finally launched a secret attack.

When Romans reached Antonia they tried to destroy the wall which protected it. They removed four stones only, but during the night the wall collapsed. "John had used his stratagem before, and had undermined their banks, that the ground then gave way, and the wall fell down suddenly." (v. 28)

Titus had raised banks beside court of the Temple: on north-west corner, on north side, on west side (v. 150).

Jews then attacked Romans on the east, near Mount of Olives, but Titus drove them back to valley. Zealots set north-west colonnade on fire (v. 165). Romans set on fire next one. Jews wanted it to burn (v. 166).

Jews also trapped some Roman soldiers when they wanted to climb over wall. They have burned wood under the wall when Romans were trapped on it (v.178-183). Meanwhile in city, Jews starved and some eat own children (v. 206-212) "... she slew her son, and then roasted him, and eat the one half of him, and kept the other half by her concealed."

After Jewish allies killed a number of Roman soldiers, Titus sent Josephus, the Jewish historian, to negotiate with the defenders; this ended with Jews wounding the negotiator with an arrow, and another sally was launched shortly after. Titus was almost captured during this sudden attack, but escaped.

Overlooking the Temple compound, the fortress provided a perfect point from which to attack the Temple itself. Battering rams made little progress, but the fighting itself eventually set the walls on fire; a Roman soldier threw a burning stick onto one of the Temple's walls. Destroying the Temple was not among Titus' goals, possibly due in large part to the massive expansions done by Herod the Great mere decades earlier. Titus had wanted to seize it and transform it into a temple dedicated to the Roman Emperor and the Roman pantheon. However, the fire spread quickly and was soon out of control. The Temple was captured and destroyed on 9/10 Tisha B'Av, sometime in August 70 CE, and the flames spread into the residential sections of the city. Josephus described the scene: 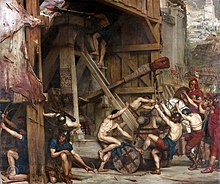 Catapulta, by Edward Poynter (1868). Siege engines such as this were employed by the Roman army during the siege.

Josephus's account absolves Titus of any culpability for the destruction of the Temple, but this may merely reflect his desire to procure favor with the Flavian dynasty.

The Roman legions quickly crushed the remaining Jewish resistance. Some of the remaining Jews escaped through hidden tunnels and sewers, while others made a final stand in the Upper City. This defense halted the Roman advance as they had to construct siege towers to assail the remaining Jews. Herod's Palace fell on 7 September, and the city was completely under Roman control by 8 September.[page needed] The Romans continued to pursue those who had fled the city.

The Siege and Destruction of Jerusalem, by David Roberts (1850). 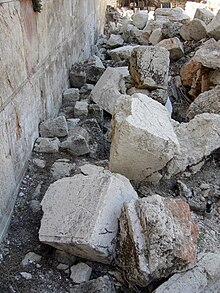 Stones from the Western Wall of the Temple Mount (Jerusalem) thrown onto the street by Roman soldiers on the Ninth of Av, 70

The account of Josephus described Titus as moderate in his approach and, after conferring with others, ordering that the 500-year-old Temple be spared. According to Josephus, it was the Jews who first used fire in the Northwest approach to the Temple to try and stop Roman advances. Only then did Roman soldiers set fire to an apartment adjacent to the Temple, starting a conflagration which the Jews subsequently made worse.

Josephus had acted as a mediator for the Romans and, when negotiations failed, witnessed the siege and aftermath. He wrote:

Josephus claims that 1.1 million people were killed during the siege, of which a majority were Jewish. Josephus attributes this to the celebration of Passover which he uses as rationale for the vast number of people present among the death toll. The revolt had not deterred pilgrims from Jewish diaspora communities from trekking to Jerusalem to visit the Temple at Passover, and a large number became trapped in the city and perished during the siege. Armed rebels, as well as the frail citizens, were put to death. All of Jerusalem's remaining citizens became Roman prisoners. After the Romans killed the armed and elder people, 97,000 were still enslaved, including Simon bar Giora and John of Giscala. Of the 97,000, thousands were forced to become gladiators and eventually expired in the arena. Many others were forced to assist in the building of the Forum of Peace and the Colosseum. Those under 17 years of age were sold into servitude. Josephus' death toll assumptions were rejected as impossible by Seth Schwartz (1984), as according to his estimates at that time about a million people lived in Palestine, about half of whom were Jews, and sizable Jewish populations remained in the area after the war was over, even in the hard-hit region of Judea. Titus and his soldiers celebrated victory upon their return to Rome by parading the Menorah and Table of the Bread of God's Presence through the streets. Up until this parading, these items had only ever been seen by the High Priest of the Temple. This event was memorialized in the Arch of Titus. Some 700 Judean prisoners were paraded through the streets of Rome in chains during the triumph, among them John of Giscala, who was sentenced to life imprisonment, and Simon bar Giora, who was executed.

Many Jews fled to areas around the Mediterranean. According to Philostratus, writing in the early years of the 3rd century, Titus reportedly refused to accept a wreath of victory, saying that the victory did not come through his own efforts but that he had merely served as an instrument of divine wrath.

After the Fall of Jerusalem and the destruction of the city and its Temple, there were still a few Judean strongholds in which the rebels continued holding out, at Herodium, Machaerus, and Masada. Both Herodium and Machaerus fell to the Roman army within the next two years, with Masada remaining as the final stronghold of the Judean rebels. In 73 CE, the Romans breached the walls of Masada and captured the fortress, with Josephus claiming that nearly all of the Jewish defenders had committed mass suicide prior to the entry of the Romans. With the fall of Masada, the First Jewish–Roman War came to an end.

The Jewish Amoraim attributed the destruction of the Temple and Jerusalem as punishment from God for the "baseless" hatred that pervaded Jewish society at the time. Many Jews in despair are thought to have abandoned Judaism for some version of paganism, many others sided with the growing Christian sect within Judaism.

The destruction was an important point in the separation of Christianity from its Jewish roots: many Christians responded by distancing themselves from the rest of Judaism, as reflected in the Gospels, which portray Jesus as anti-Temple and view the destruction of the temple as punishment for rejection of Jesus. 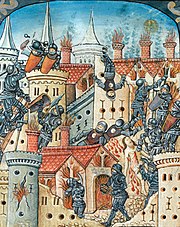 The war in Judaea, particularly the siege and destruction of Jerusalem, have inspired writers and artists through the centuries. The bas-relief in the Arch of Titus has been influential in establishing the Menorah as the most dramatic symbol of the looting of the Second Temple.

Retrieved from "https://en.wikipedia.org/w/index.php?title=Siege_of_Jerusalem_(70_CE)&oldid=1008153343"
Uses material from the Wikipedia article Siege of Jerusalem (70 CE), released under the CC BY-SA 3.0 license.