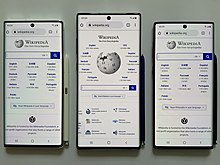 Smartphones, one of the most popular smart devices

A smart device is an electronic device, generally connected to other devices or networks via different wireless protocols such as Bluetooth, Zigbee, NFC, Wi-Fi, LiFi, 3G, etc., that can operate to some extent interactively and autonomously. Several notable types of smart devices are smartphones, smart cars, smart thermostats, smart doorbells, smart locks, smart refrigerators, phablets and tablets, smartwatches, smart bands, smart key chains, smart speakers and others. The term can also refer to a device that exhibits some properties of ubiquitous computing, including—although not necessarily—artificial intelligence.

Smart devices can be designed to support a variety of form factors, a range of properties pertaining to ubiquitous computing and to be used in three main system environments: physical world, human-centered environments and distributed computing environments.

These three forms proposed by Weiser are characterised by being macro-sized, having a planar form and by incorporating visual output displays. These were also envisioned more as information appliances. If we relax each of these three characteristics we can expand this range into a much more diverse and potentially more useful range of ubiquitous computing devices. Hence, three additional forms for ubiquitous systems have been proposed:

Smart devices are typically composed of a hardware layer (including a radio that transmits signals), a network layer (through which devices communicate with each other), and an application layer (through which end users deliver commands). These layers often include the following characteristics:

Common types of smart devices include:

Weiser's vision for ubiquitous computing can be summarized in terms of three core properties:

It is proposed that there are two additional core types of properties for UbiCom systems:

The term Smart Device Environments has two meanings. First, it can refer to a greater variety of device environments. Three different kinds of environments for devices can be differentiated: