Transnet Freight Rail is a South African rail transport company, formerly known as Spoornet. It was part of the South African Railways and Harbours Administration, a state-controlled organisation that employed hundreds of thousands of people for decades from the first half of the 20th century and was widely referred to by the initials SAR&H (SAS&H in Afrikaans). Customer complaints about serious problems with Transnet Freight Rail's service were reported in 2010. Its head office is in Inyanda House in Parktown, Johannesburg.

Railways were first developed in the area surrounding Cape Town and later in Durban around the 1840s. The first line opened in Durban on 27 June 1850. The initial network was created to serve the agricultural production area between Cape Town and Wellington. The news that there were gold deposits in the Transvaal Republic moved the Cape Colony Government (supported by British Government) to link Kimberley as soon as possible by rail to Cape Town as part of the colonial dream. 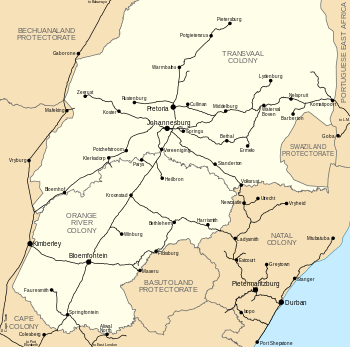 Rail network of the Central South African Railways in 1910, immediately before the creation of the Union of South Africa

Transnet Freight Rail is a freight logistics and passenger transport railway. It is the largest freight hauler in Africa. The company comprises several businesses:

The launch of the Business Units took place in a company wide event for all managerial staff on 18 April 2012. 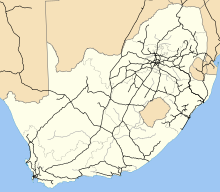 The Transnet rail network is linked to all of South Africa's neighbouring countries:

TransNamib of Namibia, at Nakop;
Botswana Railways at Ramatlabama;
National Railways of Zimbabwe and the Beitbridge Bulawayo Railway at Beitbridge;
Mozambique Ports and Railways at Ressano Garcia;
Eswatini Railways of Eswatini at Golela and Mananga;
Maseru in Lesotho on the Maseru branch line (owned by Transnet).