Stellenbosch University was the first African university to sign the Berlin Declaration on Open Access to Knowledge in the Sciences and Humanities.

The students of Stellenbosch University are nicknamed "Maties". The term probably arises from the Afrikaans word "tamatie" (meaning tomato, and referring to the maroon sport uniforms and blazer colour). An alternative theory is that the term comes from the Afrikaans colloquialism maat (meaning "buddy" or "mate") originally used diminutively ("maatjie") by the students of the University of Cape Town's precursor, the South African College. 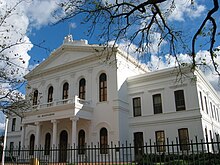 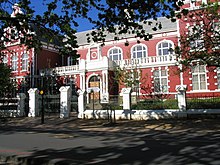 The origin of the university can be traced back to the Stellenbosch Gymnasium, which was founded in 1864 and opened on 1 March 1866. The first five students matriculated in 1870, but capacity did not initially exist for any tertiary education. However, in the 1870s the Cape Colony's first locally elected government took office and prioritised education. In 1873, four of the five 1870 matriculates became the institution's first graduates by attaining the "Second Class Certificate" through distance learning, and the gymnasium's student numbers rose to over a hundred.

In 1874, a series of government acts provided for colleges and universities, with generous subsidies and staff. A personal intervention by the Prime Minister in the same year ensured that Stellenbosch qualified, after initially being allocated to be purely a secondary school. Later in 1874, the institution acquired its first Professor and in the coming few years its capacity and staff grew rapidly. Its first academic senate was constituted at the beginning of 1876, when several new premises were also acquired. The first MA degree (in Stellenbosch and in South Africa) was completed in 1878, and also in that year, the Gymnasium's first four female students were enrolled. The institution became the Stellenbosch College in 1881 and was located at the current Arts Department. In 1887 this college was renamed Victoria College; when it acquired university status on 2 April 1918 it was renamed once again, to Stellenbosch University. Initially only one university was planned for the Cape but after the government was visited by a delegation from the Victoria College, it was decided to allow the college to be a university if it could raise £100,000. Jannie Marais, a wealthy Stellenbosch farmer, bequeathed the money required before his death in 1915. There were certain conditions to his gift which included Dutch/Afrikaans having equal status to English and that the lecturers teach at least half their lectures in Dutch/Afrikaans. By 1930, very little, if any, tuition was in English.

In December 2014, specialists at the university performed the first successful penis transplantation on a 21-year-old man.

The Leiden University ranked Stellenbosch 395th out of the top 500 universities worldwide on its CWTS Leiden Ranking list of 2013. This list also ranked the university second in both South Africa and Africa, behind only the University of Cape Town.

Stellenbosch University consistently ranks in the top 200 worldwide in law, politics and geography.

Stellenbosch University is ranked in the top 100 worldwide in development studies, theology, agriculture and forestry.

The University of Stellenbosch Business School's MBA program was ranked 65th out of 100 MBA programmes of the leading business schools in the world the Aspen Institute's 2011-12 edition of its Beyond Grey Pinstripes survey. The USB is also the only business school in South Africa, as well as the rest of the continent, to be included in the Top 100 list. 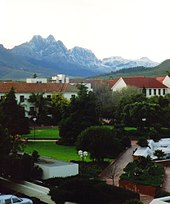 View over the "Red Square" of Stellenbosch University with the peak,"The Twins" beyond

Stellenbosch is located about 50 kilometres from Cape Town and is situated on the banks of the Eersterivier ("First River") in the famous wine-growing region and is encircled by picturesque mountains. Teaching at Stellenbosch University is divided between the main campus in Stellenbosch, the Tygerberg campus (where the Faculty of Medicine and Health Sciences is situated), the Bellville Park campus (where the University of Stellenbosch Business School (USB) is situated), and the Saldanha campus (housing the Faculty of Military Science at the Military Academy of the South African National Defence Force).

Stellenbosch University used to be a predominantly Afrikaans-medium university. However, as the student body became more diversified, pressure mounted for more classes in English.

Today, the university's Language Policy promotes multilingualism as a means to increase equitable access for all students and staff. Afrikaans, English and isiXhosa are used in academic, administrative, professional and social contexts, and classes are offered in Afrikaans and English.

Students are allowed to write their assignments, tests and examinations in English or Afrikaans. The language of tuition also varies depending on the faculty. The Faculty of Arts for example, is 40% English, so courses are lectured bilingually and the language of most handouts or prescribed material is determined by the student.

At postgraduate level the language of tuition is determined by the composition of the class. Most advanced postgraduate courses are conducted in English. According to the 2016 language profile of the university, 40.7% of its students stated Afrikaans as their home language, 46.1% stated English, 0.9% stated English and Afrikaans, and 3.1% of students stated isiXhosa as their home language.

The language policy is still an ongoing issue for the University, since it is one of the very few tertiary institutions left in South Africa still offering tuition in Afrikaans. It is situated in the Western Cape province, where 67% of the population have Afrikaans as home language, and the only one of four universities in the province to offer degree courses in Afrikaans. Due to this, it is held in high regard by the Afrikaner community.

The University annually hosts the SU Woordfees, a predominantly Afrikaans-language festival of the written and spoken word.

Stellenbosch University consists of about 150 departments divided amongst 10 faculties. It also has more than 40 research (and other) institutions.

The faculties that are situated on the main campus are:

The faculties and schools that are not situated on the main campus are:

The Southern African node of the Pan-African University is based in South Africa and will concentrate on space sciences. This decision was connected with South Africa's bid to host the Square Kilometre Array of radio telescopes. In September 2009 Jean-Pierre Ezin, African Union commissioner for science, said the node at the University of Stellenbosch in South Africa was hoped to open in February 2010. According to University World News, however, The PAU project continues in other regions although Southern Africa has been lagging behind. 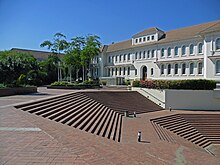 The Stellenbosch University Library has collections scattered around the campus outside of the main facility, and all of which are catalogued on a computerised database, using the university's original mainframe, a UNIVAC. There are several other satellite libraries servicing the different faculties, including the Theology Library, Law Library and Tygerberg Medical Library.

The University also has a 430-seat theatre, known as the HB Thom Theatre and an open-air amphitheatre. Accompanying these facilities is the University's own Drama Department, under the guidance of the Faculty of Arts and Social Sciences. The Department regularly puts on plays, dramas, productions, cabarets and musicals. 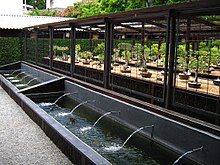 The Langenhoven Students' Centre (Neelsie) houses the Student Representative Council, a food court, a cinema, a post office, a shopping centre, an advice office and all the student societies' offices. Student bands and various entertainment and activity promotions usually appear in the main food court during lunch hour.

The university has its own radio station known as MFM (Matie FM), situated in the Neelsie. It broadcasts a mix of music, news, entertainment and campus news over the entire Stellenbosch area at 92.6 FM.

The university also distributes regular publications, Die Matie (appearing every fortnight) for its students and Kampusnuus (appearing monthly) for its staff. An official yearbook, Stellenbosch Student, is published annually and presented to all graduating students. Matieland is the name of the official alumni magazine. It is published twice a year and distributed to some 100 000 alumni and friends of the University.

Stellenbosch has served as a test site in 2006 for a set of proposed modifications to the rules of rugby union, commonly referred to as the Stellenbosch Laws. 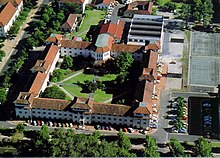 Stellenbosch has 34 residence halls in configurations for women only, men only and mixed gender. Each residence is supervised by a resident head assisted by a House Committee of senior students. The House Committee assists students with security, maintenance, and social programs. Each first year student on campus gets access to a be-well mentor who assist them with their social-emotional transition from school to university. Each residence for undergrads incorporates a laundry room, a common living room and a dining hall where meals are provided for which students book beforehand on their student account.

The number of available rooms in university residences is limited, which requires some students to find private boarding. Students in private lodgings are assigned to one of 6 Private Student Organisations (PSO), also known as Private Wards. These PSO's give private students exposure to the same campus experience as students residing in residences. The oldest residence is Wilgenhof men's residence, established in 1903.

The PSO wards are grouped into six clusters with nearby residences to form student communities (a seventh cluster is on the Tygerberg campus). For each of these clusters, a hub facility is being built, of which two have already been completed, namely amaMaties and Wimbledon. In this way, day students can enjoy the same benefits as residence students, such as mentor support, meals and a well-appointed place to go to between classes.