Stovepipe Wells is a way-station in the northern part of Death Valley, in unincorporated Inyo County, California.

According to the Köppen Climate Classification system, Stovepipe Wells has a hot desert climate, abbreviated "BWh" on climate maps. Its average high temperature is greater than 100 °F from June through September.

The first temporary settlement at Stovepipe Wells came into being when a road between Rhyolite and Skidoo was begun in 1906 to ameliorate the approach to the mine at Skidoo. A collection of tents was erected to serve travelers with food, drink and lodging. During the bonanza days of Rhyolite and Skidoo, it was the only known water source on the Cross-Valley road. When sand obscured the spot, a length of stovepipe was inserted as a marker, hence its unique name.

In 1925, entrepreneur Bob Eichmann began construction of the hotel at Stovepipe Wells, along with a scenic toll road through Death Valley. This marked the beginning of the transition from mining community to tourist destination.

The settlement is now registered as California Historical Landmark #826.

The default format for wired telephone numbers in the community is in the Death Valley exchange: (760) 786-xxxx. The community had manual telephone service until the late 1980s.

The community is contained within the Great Basin Unified Air Pollution Control District. 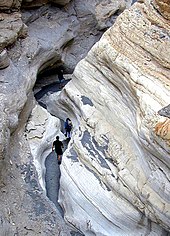 Hikers walk through the narrows of Stovepipe Wells's Mosaic Canyon 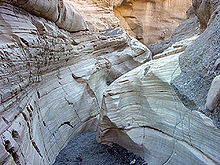 There are three California Historical Landmarks in Stovepipe Wells.

NO. 826 OLD STOVEPIPE WELLS - This waterhole, the only one in the sand dune area of Death Valley, was at the junction of the two Indian trails. During the bonanza days of Rhyolite and Skidoo, it was the only known water source on the cross-valley road. When sand obscured the spot, a length of stovepipe was inserted as a marker.

NO. 848 EICHBAUM TOLL ROAD - In 1926, H. W. Eichbaum obtained a franchise for a toll road from Darwin Falls to Stovepipe Wells, the first maintained road into Death Valley from the west. It changed the area's economic base from mining to tourism and brought about the creation of Death Valley National Monument seven years later

NO. 441 BURNED WAGONS POINT - Near this monument, the Jayhawker group of Death Valley '49ers, gold seekers from the Middle West who entered Death Valley in 1849 seeking a short route to the mines of central California, burned their wagons, dried the meat of some oxen and, with surviving animals, struggled westward on foot.