Not to be confused with Stretton-under-Fosse.

Stretton-on-Fosse is a small English village and civil parish with fewer than 200 houses, most built of Cotswold stone or locally-made red brick, situated on the Warwickshire-Gloucestershire border on the fringe of the Cotswold Hills.

It is governed by the Stratford-on-Avon District council. The population of the civil parish taken at the 2011 census was 439. By comparison, the 1931 population was 282. The village has about 200 buildings, made of Cotswold stone or locally made red bricks. Of these, 18 are Grade II listed by Historic England. At one time, the village was known as Stretton upon Fosse.

Some of the current cottages were previously used for other purposes, such as Tea Cosy Cottage (photo at right) which was the village post office in the early 1900s and The Bakery cottage which retains its old bread oven.

Stretton means "settlement on a Roman road" (from the Old English stræt and tun). In this case the road is Fosse Way.

Some of the historic stone cottages feature thatched or slate roofs 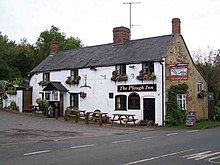 Exterior of the Plough Inn

Interior of the Plough Inn pub

While the lower ground of the village is heavy clay the upper parts are composed of sand and shingle. During commercial extraction of sand important graves of the Roman-British and Anglo-Saxon periods were uncovered and interesting skeletons and personal belongings were unearthed. These burials were the result of internecine warfare between local tribal factions. The second manor, recognised in law under the Law of Property Acts 1922 & 1925 (as amended), is held by Paul De Merry, Lord of Stretton-on-Fosse (or Stratone), who is a direct descendant of Ralph de Toeni, Lord of Flamsted who held the manor in 1235. Citations and the full history of the descent of title are available through British History Online, the Victorian History of the Counties of England, the Gloucestershire Archives, the National Archives Kew, the Shakespeare Birthplace Trust & other accredited sources.

The village website indicates that until recently, the community consisted of several farms, with housing for local residents occupied in cultivation of the land and the trade association of the rural economy, such as, shops, post-office, school, inns, blacksmith, and three religious buildings. However, of these, only the Church of St Peter and the 17th-century Plough Inn are still used for their intended purpose. The village also had another pub/lodging, the Golden Cross Inn (or Hotel) across the tracks from the railway station; photographs of the two establishments suggests that the Plough Inn is not the same building. (As of 2019, The Plough Inn was a public house.)

A new village hall was built in 1990 to replace the postwar wooden hut. The old railway line and station are now gone.

A National Gardens Scheme garden is located at Court House in the village, encompassing four acres.

Side view of the church, including some old tombstones

The site contained a church since the late 12th when it was presented to residents by Ralph le Breton. Originally, it was a chapel of the nearby village of Blockley. The current Grade II Listed building, St Peter church, made of Cotswold stone and roofed with slate, was erected in the late 16th Century. Since then, it has been extensively modified; in 1841, for example, it was rebuilt and enlarged. A 1949 description of the building provides these specifics: 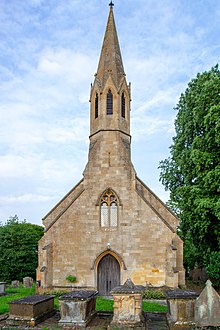 St. Peter's with some old tombs

A recent report describes the interior of this Grade II listed church:

The now deserted medieval village of Ditchford Frary (1066 to 1539) stood about a mile southeast of St Peter church on the Paddle Brook stream. In 1086, Ditchford Frary was held by Robert de Stafford. At one time, the settlement included St. Giles chapel. In 1410, its "mother church" was Great Wolford; the chapel was a ruin by the 17th century and the rectory was annexed to Stretton in 1642. Earthwork evidence of the chapel still existed at the time of the Ordnance Survey of 1967.

This June 2009 map, posted in the village, defines the use and name of the buildings

In 1826 a tram with horse-drawn cars began passing through the village, operated by the Stratford and Moreton Tramway on a four-feet gauge rail.

By 1825 the Great Western Railway operated a train between Stratford-upon-Avon and Moreton-in-Marsh, and it passed through the village without stopping. The railway station was not built until November 1892, in the northeast part of the village near the Fosseway road. Before completion of construction, the train would stop on request at the nearby Golden Cross Inn.

Passenger services were discontinued in 1929 and freight services in 1941. A branch line was constructed to Shipston-on-Stour which was used for passengers until 1929 and goods until 1960. The Stratford and Moreton Tramway also stopped at Stretton. The station was demolished in 1964.

In 2019, direct (non-stop) Great Western train service from London Paddington station to the Moreton-in-Marsh railway station was expected to take under 2 hours; a bus was available from the station to Stretton. The highway route from London to Stretton was via the M4 to M25 to M40 and then to the A429, approximately a two-hour drive. No public transport was running through the village but a bus did stop just outside the community.

Retrieved from "https://en.wikipedia.org/w/index.php?title=Stretton-on-Fosse&oldid=1008895390"
Uses material from the Wikipedia article Stretton-on-Fosse, released under the CC BY-SA 3.0 license.