The Sundance Film Festival (formerly Utah/US Film Festival, then US Film and Video Festival) is an annual film festival organized by the Sundance Institute. It takes place each January in Park City, Utah, Salt Lake City, and at the Sundance Resort, and is the largest independent film festival in the United States. It includes competitive categories, includes documentary and dramatic films, both feature length and short films, in which awards are given, as well as out-of-competition categories for showcasing new films. 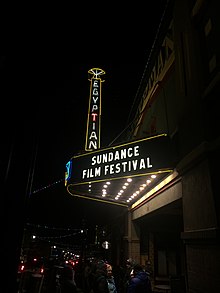 Mary G. Steiner Egyptian Theatre is one of the festival's oldest and most recognizable venues

Sundance is the largest independent film festival in the US, with more than 46,660 attending in 2016. It is held in January in Park City, Salt Lake City, and the Sundance Resort (a ski resort near Provo, Utah) and acts as a showcase for new work from American and international independent filmmakers.

The festival consists of competitive sections for American and international dramatic and documentary films, both feature films and short films, and a group of out-of-competition sections, including NEXT, New Frontier, Spotlight, Midnight, Sundance Kids, From the Collection, Premieres, and Documentary Premieres.

Sundance began in Salt Lake City in August 1978 as the Utah/US Film Festival in an effort to attract more filmmakers to Utah. It was founded by Sterling Van Wagenen, head of Robert Redford's company Wildwood, and John Earle of the Utah Film Commission. The 1978 festival featured films such as Deliverance, A Streetcar Named Desire, Midnight Cowboy, Mean Streets, and Sweet Smell of Success. The goal of the festival was to showcase American-made films, highlight the potential of independent film, and increase visibility for filmmaking in Utah. The main focus of the event was to conduct a competition for independent American films, present a series of retrospective films and filmmaker panel discussions, and celebrate the Frank Capra Award. The festival also highlighted the work of regional filmmakers who worked outside the Hollywood system.

In 1979, Sterling Van Wagenen left to head up the first-year pilot program of what became the Sundance Institute, and James W. Ure took over briefly as executive director, followed by Cirina Hampton Catania. More than 60 films were screened at the festival that year, and panels featured many well-known Hollywood filmmakers. Also that year, the first Frank Capra Award went to Jimmy Stewart. The festival also made a profit for the first time. In 1980, Catania left to pursue a production career in Hollywood.

In 1981, the festival moved to Park City, Utah, and changed the dates from September to January. The move from late summer to midwinter was done by the executive director Susan Barrell with the cooperation of Hollywood director Sydney Pollack, who suggested that running a film festival in a ski resort during winter would draw more attention from Hollywood. It was called the US Film and Video Festival.

The Sundance Film Festival experienced its extraordinary growth in the 1990s, under the leadership of Geoffrey Gilmore and John Cooper, who transformed the venue into the premier festival in the United States, on par of Cannes, Venice, Berlin, and Toronto International Film Festival. That crucial era is very well documented in Professor Emanuel Levy's book, Cinema of Outsiders: The Rise of American Independent Cinema (NYU Press, 1999, 2001, 2011), the most comprehensive chronicle of Sundance and the Indie movement over the past four decades.[according to whom?]

Spin-offs in other locations

UK-based publisher C21 Media first revealed in October 2010 that Robert Redford was planning to bring the Sundance Film Festival to London, and in March the following year, Redford officially announced that Sundance London would be held at The O2, in London from 26–29 April 2012; the first time it has traveled outside the US.

In a press statement, Redford said, "We are excited to partner with AEG Europe to bring a particular slice of American culture to life in the inspired setting of The O2, and in this city of such rich cultural history. [...] It is our mutual goal to bring to the UK, the very best in current American independent cinema, to introduce the artists responsible for it, and in essence, help build a picture of our country that is broadly reflective of the diversity of voices not always seen in our cultural exports."

The majority of the film screenings, including the festival's premieres, would be held within the Cineworld cinema at The O2 entertainment district. The 2013 Sundance London Festival was held 25–28 April 2013, and sponsored by car-maker Jaguar.

Films shown at the 2019 event included the controversial dark tale The Nightingale, US comedy Corporate Animals, Lulu Wang's The Farewell (which won the Audience Award) and Sophie Hyde's film based on Emma Jane Unsworth's novel about female friendship, Animals.

From 2006 through 2008, Sundance Institute collaborated with the Brooklyn Academy of Music (BAM) on a special series of film screenings, performances, panel discussions, and special events bringing the institute's activities and the festival's programming to New York City.

Three Seasons was the first in festival history to ever receive both the Grand Jury Award and Audience Award, in 1999. Later films that won both awards are: God Grew Tired of Us in 2006 (documentary category), Quinceañera in 2006 (dramatic category), Precious in 2009, Fruitvale (later retitled Fruitvale Station) in 2013, Whiplash in 2014, Me and Earl and the Dying Girl in 2015, and The Birth of a Nation in 2016.

At the 2016 Sundance Film Festival, three films went on to garner eight Oscar nominations. Manchester by the Sea took the lead in Sundance-supported films with six Oscar nominations, including Best Picture. The next year, about 40 films were acquired by distributors, among them including Amazon, Netflix, Lionsgate, and Universal.

Growth of the festival

The festival has changed over the decades from a low-profile venue for small-budget, independent creators from outside the Hollywood system to a media extravaganza for Hollywood celebrity actors, paparazzi, and luxury lounges set up by companies not affiliated with Sundance. Festival organizers have tried curbing these activities in recent years, beginning in 2007 with their ongoing Focus On Film campaign.

The 2009 film Official Rejection documented the experience of small filmmakers trying to get into various festivals in the late 2000s, including Sundance. The film contained several arguments that Sundance had become dominated by large studios and sponsoring corporations. A contrast was made between the 1990s, in which non-famous filmmakers with tiny budget films could get distribution deals from studios like Miramax Films or New Line Cinema, (like Kevin Smith's Clerks), and the 2000s, when major stars with multimillion-dollar films (like The Butterfly Effect with Ashton Kutcher) dominated the festival. Kevin Smith doubted that Clerks, if made in the late 2000s, would be accepted to Sundance.

Numerous small festivals sprung up around Sundance in the Park City area, including Slamdance, Nodance, Slumdance, It-dance, X-Dance, Lapdance, Tromadance, The Park City Film Music Festival, etc., though all except Slamdance are no longer held.

Included in the Sundance changes made in 2010, a new programming category titled "NEXT" (often denoted simply by the characters "<=>", which mean "less is more") was introduced to showcase innovative films that are able to transcend the confines of an independent budget. Another recent addition was the Sundance Film Festival USA program, in which eight of the festival's films are shown in eight different theaters around the United States.

The premiere of, American singer-songwriter Taylor Swift's 2020 documentary film: Miss Americana, at the opening night of the 2020 Sundance Film Festival and Swift's pre-announced appearance at the festival, caused a great surge in the number of attendees, traction and media coverage, which was new to the normally reserved festival.

The 44th will be going virtual for the first time come 2021.