See also: Pulmonary surfactant
Substance that lowers the surface tension between a liquid and another material 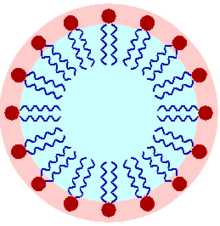 Schematic diagram of a micelle of oil in aqueous suspension, such as might occur in an emulsion of oil in water. In this example, the surfactant molecules' oil-soluble tails project into the oil (blue), while the water-soluble ends remain in contact with the water phase (red).

Surfactants are compounds that lower the surface tension (or interfacial tension) between two liquids, between a gas and a liquid, or between a liquid and a solid. Surfactants may act as detergents, wetting agents, emulsifiers, foaming agents, and dispersants.

The word surfactant is a blend of surface-active agent.

Schematic diagram of a micelle – the lipophilic tails of the surfactant ions remain inside the oil because they interact more strongly with oil than with water. The polar "heads" of the surfactant molecules coating the micelle interact more strongly with water, so they form a hydrophilic outer layer that forms a barrier between micelles. This inhibits the oil droplets, the hydrophobic cores of micelles, from merging into fewer, larger droplets ("emulsion breaking") of the micelle. The compounds that coat a micelle are typically amphiphilic in nature, meaning that micelles may be stable either as droplets of aprotic solvents such as oil in water, or as protic solvents such as water in oil. When the droplet is aprotic it is sometimes[when?] known as a reverse micelle.

Surfactants are usually organic compounds that are amphiphilic, meaning they contain both hydrophobic groups (their tails) and hydrophilic groups (their heads). Therefore, a surfactant contains both a water-insoluble (or oil-soluble) component and a water-soluble component. Surfactants will diffuse in water and adsorb at interfaces between air and water or at the interface between oil and water, in the case where water is mixed with oil. The water-insoluble hydrophobic group may extend out of the bulk water phase, into the air or into the oil phase, while the water-soluble head group remains in the water phase.

Sodium stearate, the most common component of most soap, which comprises about 50% of commercial surfactants

Structure of surfactant phases in water

In the bulk aqueous phase, surfactants form aggregates, such as micelles, where the hydrophobic tails form the core of the aggregate and the hydrophilic heads are in contact with the surrounding liquid. Other types of aggregates can also be formed, such as spherical or cylindrical micelles or lipid bilayers. The shape of the aggregates depends on the chemical structure of the surfactants, namely the balance in size between the hydrophilic head and hydrophobic tail. A measure of this is the hydrophilic-lipophilic balance (HLB).Surfactants reduce the surface tension of water by adsorbing at the liquid-air interface. The relation that links the surface tension and the surface excess is known as the Gibbs isotherm.

Dynamics of surfactants at interfaces

The dynamics of surfactant adsorption is of great importance for practical applications such as in foaming, emulsifying or coating processes, where bubbles or drops are rapidly generated and need to be stabilized. The dynamics of adsorption depend on the diffusion coefficient of the surfactant. As the interface is created, the adsorption is limited by the diffusion of the surfactant to the interface. In some cases, there can exist an energetic barrier to adsorption or desorption of the surfactant. If such a barrier limits the adsorption rate, the dynamics are said to be ‘kinetically limited'. Such energy barriers can be due to steric or electrostatic repulsions. The surface rheology of surfactant layers, including the elasticity and viscosity of the layer, play an important role in the stability of foams and emulsions.

Characterization of interfaces and surfactant layers

Interfacial and surface tension can be characterized by classical methods such as the -pendant or spinning drop method. Dynamic surface tensions, i.e. surface tension as a function of time, can be obtained by the maximum bubble pressure apparatus

The structure of surfactant layers can be studied by ellipsometry or X-Ray reflectivity.

Surfactant molecules have either one tail or two; those with two tails are said to be double-chained. 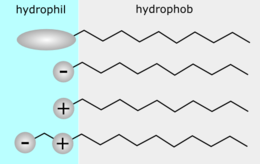 Surfactant classification according to the composition of their head: non-ionic, anionic, cationic, amphoteric.

Carboxylates are the most common surfactants and comprise the carboxylate salts (soaps), such as sodium stearate. More specialized species include sodium lauroyl sarcosinate and carboxylate-based fluorosurfactants such as perfluorononanoate, perfluorooctanoate (PFOA or PFO).

Zwitterionic (amphoteric) surfactants have both cationic and anionic centers attached to the same molecule. The cationic part is based on primary, secondary, or tertiary amines or quaternary ammonium cations. The anionic part can be more variable and include sulfonates, as in the sultaines CHAPS (3-[(3-cholamidopropyl)dimethylammonio]-1-propanesulfonate) and cocamidopropyl hydroxysultaine. Betaines such as cocamidopropyl betaine have a carboxylate with the ammonium. The most common biological zwitterionic surfactants have a phosphate anion with an amine or ammonium, such as the phospholipids phosphatidylserine, phosphatidylethanolamine, phosphatidylcholine, and sphingomyelins.

Non-ionic surfactants have covalently bonded oxygen-containing hydrophilic groups, which are bonded to hydrophobic parent structures. The water-solubility of the oxygen groups is the result of hydrogen bonding. Hydrogen bonding decreases with increasing temperature, and the water solubility of non-ionic surfactants therefore decreases with increasing temperature.

Fatty acid ethoxylates are a class of very versatile surfactants, which combine in a single molecule the characteristic of a weakly anionic, pH-responsive head group with the presence of stabilizing and temperature responsive ethyleneoxide units. 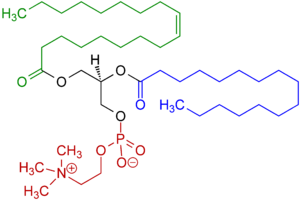 Most anionic and non-ionic surfactants are nontoxic, having LD50 comparable to sodium chloride. The toxicity of quaternary ammonium compounds, which are antibacterial and antifungal, varies. Dialkyldimethylammonium chlorides (DDAC, DSDMAC) used as fabric softeners have low LD50 (5 g/kg) and are essentially non-toxic, while the disinfectant alkylbenzyldimethylammonium chloride has an LD50 of 0.35 g/kg. Prolonged exposure to surfactants can irritate and damage the skin because surfactants disrupt the lipid membrane that protects skin and other cells. Skin irritancy generally increases in the series non-ionic, amphoteric, anionic, cationic surfactants.

Surfactants are routinely deposited in numerous ways on land and into water systems, whether as part of an intended process or as industrial and household waste. Some of them are known to be toxic to animals, ecosystems, and humans, and can increase the diffusion of other environmental contaminants.

Anionic surfactants can be found in soils as the result of sludge application, wastewater irrigation, and remediation processes. Relatively high concentrations of surfactants together with multimetals can represent an environmental risk. At low concentrations, surfactant application is unlikely to have a significant effect on trace metal mobility.

In the case of Deepwater Horizon oil spill, unprecedented amounts of Corexit were sprayed directly into the ocean at the leak and on the sea-water's surface. The apparent theory being that the surfactants isolate droplets of oil, making it easier for petroleum-consuming microbes to digest the oil. The active ingredient in Corexit is dioctyl sodium sulfosuccinate (DOSS), sorbitan monooleate (Span 80), and polyoxyethylenated sorbitan monooleate (Tween-80)).

Two major surfactants, linear alkylbenzene sulfonates (LAS) and the alkyl phenol ethoxylates (APE) break down under aerobic conditions found in sewage treatment plants and in soil to nonylphenol, which is thought to be an endocrine disruptor.

Attracting much attention is the non-biodegradability of fluorosurfactant, e.g. perfluorooctanoic acid (PFOA).

The annual global production of surfactants was 13 million tonnes in 2008. In 2014, the world market for surfactants reached a volume of more than 33 billion US-dollars. Market researchers expect annual revenues to increase by 2.5% per year to around 40.4 billion US-dollars until 2022. The commercially most significant type of surfactants is currently the anionic surfactant alkyl benzene sulfonate (LAS), which is widely used in cleaners and detergents.

The displacement of air from the matrix of cotton pads and bandages so that medicinal solutions can be absorbed for application to various body areas; the displacement of dirt and debris by the use of detergents in the washing of wounds; and the application of medicinal lotions and sprays to surface of skin and mucous membranes.

Detergents in biochemistry and biotechnology

In solution, detergents help solubilize a variety of chemical species by dissociating aggregates and unfolding proteins. Popular surfactants in the biochemistry laboratory are sodium lauryl sulfate (SDS) and cetyl trimethylammonium bromide (CTAB). Detergents are key reagents to extract protein by lysis of the cells and tissues: They disorganize the membrane's lipidic bilayer (SDS, Triton X-100, X-114, CHAPS, DOC, and NP-40), and solubilize proteins. Milder detergents such as octyl thioglucoside, octyl glucoside or dodecyl maltoside are used to solubilize membrane proteins such as enzymes and receptors without denaturing them. Non-solubilized material is harvested by centrifugation or other means. For electrophoresis, for example, proteins are classically treated with SDS to denature the native tertiary and quaternary structures, allowing the separation of proteins according to their molecular weight.

Detergents have also been used to decellularise organs. This process maintains a matrix of proteins that preserves the structure of the organ and often the microvascular network. The process has been successfully used to prepare organs such as the liver and heart for transplant in rats. Pulmonary surfactants are also naturally secreted by type II cells of the lung alveoli in mammals.

Surfactants are used with quantum dots in order to manipulate growth. and assembly of the dots, reactions on their surface, electrical properties, etc., it is important to understand how surfactants arrange on the surface of the quantum dots.

Uses material from the Wikipedia article "Surfactant", released under the CC BY-SA 3.0 license.