Paint has four major components: pigments, binders, solvents, and additives. Pigments serve to give paint its color, texture, toughness, as well as determining if a paint is opaque or not. Common white pigments include titanium dioxide and zinc oxide. Binders are the film forming component of a paint as it dries and affects the durability, gloss, and flexibility of the coating. Polyurethanes, polyesters, and acrylics are all examples of common binders. The solvent is the medium in which all other components of the paint are dissolved and evaporates away as the paint dries and cures. The solvent also modifies the curing rate and viscosity of the paint in its liquid state. There are two types of paint: solvent-borne and water-borne paints. Solvent-borne paints use organic solvents as the primary vehicle carrying the solid components in a paint formulation, whereas water-borne paints use water as the continuous medium. The additives that are incorporated into paints are a wide range of things which impart important effects on the properties of the paint and the final coating. Common paint additives are catalysts, thickeners, stabilizers, emulsifiers, texturizers, biocides to fight bacterial growth, etc.

The word surfactant is short for surface active agent. Surfactants are compounds that lower the surface tension of a liquid, the interfacial tension between two liquids, or the interfacial tension between a liquid and a solid. In solutions this behavior is known as wetting, and it occurs as a result of surfactants adsorbing to the air/water interface. Soluble surfactants are also capable of forming micelles and other aggregate structures in solution, leading to a stabilizing effect in latex paints. Surfactants in paint are used to change many end properties of a dried paint, as well as to emulsify paints in their liquid state.

Role of surfactants in paint

Surfactants affect a wide array of physical properties in paints. Surfactants affect the behavior of a paint not only during the lifetime of the formed coating but also the initial aggregation and film formation of the paint. Surfactants are also used to stabilize the dispersion of polymer particles during emulsion polymerization in paints and other applications. The mechanical stability, freeze-thaw stability and shelf-life of paints are all improved by the addition of surfactants. The addition of surfactants to paint also allow the paint to coat a surface more easily because surfactants increase the wetting of a solution.

The addition of surfactants does not always have a positive effect on all properties. The water resistance of the coating can be decreased with surfactant addition since surfactants can be very water-soluble and will easily wash out of a coating. This problem of moisture resistance is particularly prevalent problem for art conservation, as well as problems with adhesion, loss of optical clarity, and dirt pickup caused by polyether surfactants in contemporary acrylic emulsion used in artworks bearing acrylic coats. While the type and amount of surfactant determine what properties will be affected, other chemicals in a paint can alter the overall effect the surfactants may have on the paint. Elasticity has been found to either increase or decrease in latex paints depending on the amount of TiO2 present. 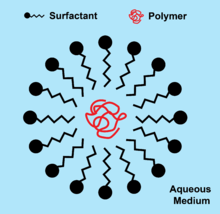 A surfactant micelle around a polymer chain.

Latex paints are an emulsion of polymer particles dispersed in water. Macroemulsions in latex paint are inherently unstable and phase separate, so surfactants are added to lower interfacial tension and stabilize polymer particles to prevent demulsification.

The thermodynamic explanation for demulsification is the gain in Gibbs Free Energy resulting from lowering the total area of high energy surface interactions.

The size of the droplets of dispersed polymer in a latex paint can be modeled with the following equation:

There are three main categories of surfactants used in paint —ionic, polymeric and electrosteric.

According to head group composition

The head group classification of a surfactant is determined by the head group ion type. Ionic surfactants derive their amphiphilicity from a charged hydrophilic head group and tend to be small, low molecular weight molecules. Ionic surfactants will stabilize particles suspended in a paint by electrostatic repulsion and are easily adsorbed and desorbed from a surface due to their small size.

Anionic head groups are negatively charged, and commonly used in cleaning products. Anionic surfactants can be found in products such as shampoos, laundry detergents, and soaps because of their ability to remove dirt from soft mediums such as fabric. Anionic surfactants are easily suspended in water due to the polarity of the charged head group. However, hard water can deactivate the molecule. Some of the more commonly used anionic head groups are sulfates and ethoxylates.

According to tail composition

Hydrocarbon chains are long chains which consist of a carbon backbone hydrogen substituents, making them very hydrophobic. Hydrocarbon chains alone form waxes and oils and retain these characteristics when they are incorporated into surfactant. A good example of surfactants containing a hydrocarbon chain are lipids, which form cell membranes.

Fluorocarbon chain tails consist of a carbon backbone that has fluorine substituents instead of hydrogens. Fluorocarbons help to lower the surface tension of water and other solvents because of their lipophobic nature even in harsh conditions such as low pH. When fluorocarbons are incorporated into surfactants they are used as stain repellents and incorporated into coatings in order to decrease surface defects.

Siloxane chains consist of a backbone which contains alternating oxygen and silicon atoms. Surfactants with siloxane tails have been found to resist hydrolysis and prevent breakdown polymer chains which can cause cracking in the paint and are thus used in products such as cosmetics, deodorants, defoamer, and soap.

Problems with surfactant use

Retrieved from "https://en.wikipedia.org/w/index.php?title=Surfactants_in_paint&oldid=886913700"
Uses material from the Wikipedia article Surfactants in paint, released under the CC BY-SA 3.0 license.