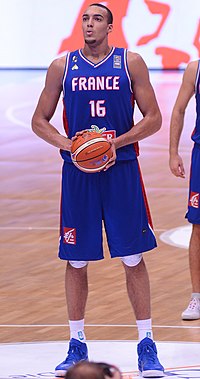 On June 4, the NBA approved a plan to continue the 2019–20 season with 22 teams playing at Walt Disney World's ESPN Wide World of Sports Complex in the NBA bubble.

On August 26, the season was suspended for a second time due to a wildcat strike during the playoffs.

Main articles: COVID-19 pandemic in the United States and Canada

The NBA had been tracking the COVID-19 pandemic closely, speaking with public health authorities such as the Center for Disease Control (CDC) and the Public Health Agency of Canada (PHAC) on the matter. The league spoke to the players' union on the prospect of playing games without fans. The league held a conference call on March 11, 2020, between Commissioner Adam Silver and the 30 owners to reach a consensus on the matter. They were envisioning a scenario where games were to be played with essential personnel only and no fans in attendance, following suit with the NCAA.

On March 9, the NBA, National Hockey League, Major League Baseball, and Major League Soccer jointly announced that teams from all four leagues would be required to limit locker room access to players, coaches, general managers, and basketball and public relations staff, with the notable exclusion of media; several teams from the NBA and NHL had already begun voluntarily limiting locker room access during the previous week. The NBA had told teams they should make plans for the possibility of playing games without fans and with only essential personnel in attendance.

The Golden State Warriors announced on March 11 that their game the following day between them and the Brooklyn Nets would be played without fans, offering refunds or exchanges, following San Francisco's order prohibiting assemblies larger than 1,000 individuals. The Cleveland Cavaliers had also planned to play home games without fans, due to Ohio governor Mike DeWine banning mass gatherings in the state.

On March 11, the NBA indefinitely suspended the season for at least 30 days after Utah Jazz center Rudy Gobert tested positive for COVID-19 prior to the tip-off of the Jazz–Thunder game in Oklahoma City. After the referees asked the coaches to huddle to relay the information, players warming up were told to return to their locker rooms, and the referees relayed the league decision to the scorer's table, broadcasters and the arena's public address announcer. Attendees were then told by Chesapeake Energy Arena PA announcer Mario Nanni that the game was postponed "due to unforeseen circumstances", and to safely depart the arena with a reassurance the crowd was "all safe". This was the biggest interruption to an NBA season since the 2011 NBA lockout.

The league suspended play following the conclusion of games played on March 11, and the Denver Nuggets–Dallas Mavericks game that was already in progress at the time of the announcement continued. However, the New Orleans Pelicans–Sacramento Kings game later that night was postponed, as one of the referees scheduled to work that game had officiated a Jazz game earlier that week.

The league asked teams who played the Jazz in the past 10 days to undergo 14 days of self-isolation, including the Cleveland Cavaliers, New York Knicks, Boston Celtics, Detroit Pistons, Toronto Raptors, and the Oklahoma City Thunder. On March 12, the Philadelphia 76ers were asked to undergo self-isolation as well.

The NBA G League also suspended its season. It was eventually forced to cancel the rest of the season on June 4.

Following CDC recommendation that events of 50 or more persons be cancelled for up to eight weeks, the NBA presented a best-case scenario of a return to play in June 2020, with the season ending in August 2020.

Gobert's positive test led to suspension of play also caused a massive ripple effect across the sports world, as numerous amateur and professional sporting events and seasons were either suspended, postponed, relocated or cancelled as a result.

On March 12, the NBA delineated a set of policies that was effective through March 16. These included players being required to remain in the market of their team, no group workouts or practices, and team physicians or trainers talking to each player daily. The following day, the league and the National Basketball Players Association set a moratorium period until April 10, with players getting their pay in full on March 15. A memo sent to the NBA teams on March 15 allowed for players to travel out of their market provided they quarantined, did physical distancing, and gave notices of their whereabouts. Teams were encouraged to do health check-ins.

On April 6, Ernie Johnson of the NBA on TNT conducted an interview with Silver over videotelephony, which was posted to the league's Twitter account. In it, Silver stated there would be no decision on a restart of the season made before May 1 at the bare minimum, a date that Silver admitted that a decision might not be made, and it could come much later.

The suspension drew remarks from several current and former NBA players. Several players pledged to offer assistance to arena workers across the league who are without work due to the league's response to COVID-19, although many of the teams have pledged to help support their workers to varying degrees.

The Dallas Mavericks, Cleveland Cavaliers, and Detroit Pistons were among the first to announce plans that would pay workers for the days they are missing due to the suspension of the league. On March 28, the Pistons announced that they would offer their performance center to health officials for use against COVID-19.

On March 12, 2020, the following day after the NBA suspended the season, the NHL suspended their 2019–20 season. In a statement addressing the situation, the NHL included:

The NHL became the first of the four major sports leagues to announce a return to play on May 26, 2020, with 24 of the league's 31 teams competing in a playoff tournament to decide the champion of the 2019–20 season.

The league was already set to lose revenue prior to the COVID-19 pandemic due to the controversy involving Houston Rockets general manager Daryl Morey's deleted tweet about the Hong Kong protests regarding pro-democracy. The suspension is expected to cost the league hundreds of millions of dollars in lost revenue in national television advertisements and lost ticket sales. With the vast majority of events at arenas cancelled, down-the-line workers are at risk due to lost revenue from unused tickets and effective employment as a result of closed concession stands and surrounding team memorabilia stands and shops, along with surrounding entertainment districts.

On June 4, the NBA Board of Governors approved 29–1 (with the lone dissenter being the Portland Trail Blazers) resuming the 2019–20 season in Orlando, Florida in a bubble at Walt Disney World, after prior consideration of Las Vegas and Houston as potential spots. The season continued as follows: The 2020 NBA draft was originally scheduled for October 15, but was rescheduled to November 18 instead.

Additionally, the teams involved were subject to intense social restrictions and their movement was limited to the bubble.

The following is a list of NBA players and personnel from the 2019–20 season that are known to have been infected:

On March 12, during a special edition of Inside the NBA, Hall of Fame player and analyst Charles Barkley revealed he was tested for COVID-19 after suffering from an illness following a recent trip to New York, which was rapidly becoming the worst hit locality of the U.S. pandemic. Barkley self-quarantined in Atlanta. Barkley's test was subsequently negative and he completed his isolation period two weeks later.

On March 17, the Brooklyn Nets announced that four of their players had tested positive as well, one of whom was forward Kevin Durant.

On March 25, Christian Wood announced he had "fully recovered" from COVID-19. On the same day, it was reported that a cameraman who worked the Jazz–Pistons game on March 7 at Little Caesars Arena had been infected and was placed in a medically induced coma. He would later recover.

On March 26, it was announced that Maury Hanks, a Detroit Pistons scout, had been hospitalized with COVID-19. He later survived and was discharged from the hospital.

On March 27, the Utah Department of Health cleared the Utah Jazz of COVID-19.

On March 27, ESPN NBA analyst Doris Burke revealed she had tested positive for COVID-19 two weeks earlier. Burke had been experiencing symptoms before calling her scheduled game on March 11 in Dallas. She is now symptom-free.

On April 13, Jacqueline Towns, the mother of Minnesota Timberwolves center Karl-Anthony Towns, died at age 58 of complications of COVID-19 after having previously been placed in a medically induced coma.

On May 22, it was announced that Hall of Famer Patrick Ewing tested positive for COVID-19.

On June 23, it was reported that Denver Nuggets center Nikola Jokić tested positive for COVID-19 a week prior.

On June 26, the NBA and the National Basketball Players Association announced that 16 out of 302 players tested positive for COVID-19 in the first wave of mandatory testing.