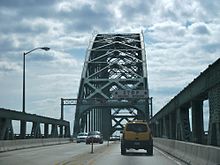 View from the roadway of the Tacony-Palmyra Bridge, across the upper Delaware River from Palmyra, New Jersey to Tacony section of Philadelphia with drawbridge signs

The Tacony–Palmyra Bridge is a combination steel tied-arch and double-leaf bascule bridge across the Delaware River that connects New Jersey Route 73 in Palmyra, New Jersey with Pennsylvania Route 73 in the Tacony section of Philadelphia. The bridge, designed by Polish-born architect Ralph Modjeski, has a total length of 3,659 feet (1,115 m) and spans 2,324 feet (708 m). After one and a half years of construction, it opened on August 14, 1929, replacing ferry service that had operated between Tacony and Palmyra since May 6, 1922.

The Tacony–Palmyra Bridge from New Jersey

Owned and maintained by the Burlington County Bridge Commission of New Jersey, the bridge has a $4 cash toll and $3 E-ZPass toll for northbound (Pennsylvania-bound) traffic. Despite interruptions due to occasional openings for passing shipping traffic (the upper Delaware River is navigable as far north as Van Sciver Lake near Bristol, Pennsylvania), it serves as a lower-cost alternative to the more southerly, six-lane, high-span Betsy Ross Bridge, which charges $5 for the westbound crossing.

Built with four lanes, the bridge was modified in 1997 to have three wider lanes – two northbound towards Philadelphia and one southbound towards New Jersey. A walkway provides access for pedestrian and bicycle traffic.

The bascule draw span is located immediately east of the main, arched span. On October 10, 2013, the bascule span jammed and became stuck in the open position when a roller under the maintenance walkway seized, closing the bridge for approximately eleven hours.

In 2016, work began on rehabilitation and improved traffic controls systems, including barriers and traffic lights.