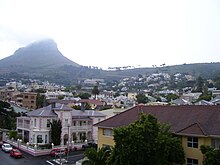 There is a very active neighbourhood watch called Tamboerskloof Neighbourhood Watch (TBKWatch) which assists the community with volunteer patrols, a radio network, a CCTV network and reporting of service issues such as out of order street lights, traffic lights, potholes, and blocked drains. They work very closely with a community control room (Watchcom), the South African Police Service, City of Cape Town Metro Police, nearby City Improvement Districts, as well as local armed response companies.

Several schools can be found within Tamboerskloof, including:

According to the 2001 Census, the population of Tamboerskloof was 2 921. The following tables show various demographic data about Tamboerskloof from that census.

Retrieved from "https://en.wikipedia.org/w/index.php?title=Tamboerskloof&oldid=1000308994"
Uses material from the Wikipedia article Tamboerskloof, released under the CC BY-SA 3.0 license.