The Théâtre des Champs-Élysées (French pronunciation: ​[teɑtʁ de ʃɑ̃z‿elize]) is an entertainment venue standing at 15 avenue Montaigne in Paris. It is situated near Avenue des Champs-Élysées, from which it takes its name. Its eponymous main hall may seat up to 1,905 people, while the smaller Comédie and Studio des Champs-Élysées above the latter may seat 601 and 230 people respectively.

Commissioned by impresario Gabriel Astruc, the theatre was built from 1911 to 1913 upon the designs of brothers Auguste Perret and Gustave Perret following a scheme by Henry van de Velde, and became the first example of Art Deco architecture in the city. Less than two months after its inauguration, the Théâtre hosted the world premiere of the Ballets Russes' Rite of Spring, which provoked one of the most famous classical music riots.

At present, the theatre shows about three staged opera productions a year, mostly baroque or chamber works more suited to the modest size of its stage and orchestra pit. It also houses an important concert season. It is the home venue of the Orchestre National de France and the Orchestre Lamoureux, and serves as a French base for the Vienna Philharmonic Orchestra as well.

The theatre is built of reinforced concrete and features rectangular forms, straight lines, and decoration attached to the outside on plaques of marble and stucco, which was a radical departure from the Art Nouveau style, and, at the time, shockingly plain in appearance.

The building's concrete construction was not merely a stylistic choice. Subsoil conditions and the site's proximity to the Seine made concrete necessary. Henry van de Velde was the initial architect, resigning when it was clear that the contractors, the Perret brothers, had a far deeper understanding of reinforced concrete construction than he did, although the Perrets, were not licensed architects and had another designer, Roger Bouvard, sign their plans.

The building includes an exterior bas relief by Antoine Bourdelle, a dome by Maurice Denis, paintings by Édouard Vuillard and Jacqueline Marval, and a stage curtain by Ker-Xavier Roussel. The building houses two smaller stages, the Comédie des Champs-Élysées theatre on the 3rd floor, and the Studio des Champs-Élysées on the 5th floor.

The building is considered a landmark of modern architecture, and has been a monument historique of France since 1957.

Stage of the Théâtre des Champs-Élysées 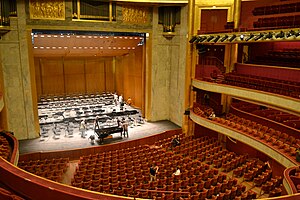 View of the auditorium and stage

Gabriel Astruc was the first director of the theatre, and programmed contemporary music, dance and opera, including works by Claude Debussy and Igor Stravinsky.

Although Astruc was soon financially overextended, the first season was extraordinary. The theatre opened on April 2, 1913, with a gala concert featuring five of France's most renowned composers conducting their own works: Claude Debussy (Prélude à l'après-midi d'un faune), Paul Dukas (L'apprenti sorcier), Gabriel Fauré (La naissance de Vénus), Vincent d'Indy (Le camp from Wallenstein), and Camille Saint-Saëns (Phaeton and excerpts from his choral work La lyre et la harpe). This was followed the next day with a performance of Hector Berlioz's opera Benvenuto Cellini conducted by Felix Weingartner which included a "dance spectacular" by Anna Pavlova. Later there was a series of concerts devoted to Beethoven conducted by Weingartner and featuring the pianists Alfred Cortot and Louis Diémer, and the soprano Lilli Lehmann. The Royal Concertgebouw Orchestra of Amsterdam conducted by Willem Mengelberg gave two concerts: Beethoven's Ninth Symphony and the Paris premiere of Fauré's opera Pénélope (May 10).

Sergei Diaghilev's Ballets Russes presented the company's fifth season, although their first in the new theatre, opening on May 15 with Igor Stravinsky's The Firebird, Nikolai Rimsky-Korsakov's Scheherazade (as choreographed by Michel Fokine), and the world premiere of Debussy's Jeux (with choreography by Vaslav Nijinsky and designs by Léon Bakst). Some in the audiences had been offended by the depiction on stage of a tennis game in Jeux, but this was nothing compared to the reaction to the ritual sacrifice in Stravinsky's Rite of Spring on May 29. Carl Van Vechten described the scene:

Marie Rambert heard someone in the gallery call out: "Un docteur … un dentiste … deux docteurs…." The second performance (June 4) was less eventful, and, according to Maurice Ravel, the entire work could actually be heard.

The first season ended on June 26, 1913, with a performance of Pénélope, and the new one opened on October 2 with the same work. On October 9 d'Indy conducted Carl Maria von Weber's opera Der Freischütz. On October 15 Debussy conducted the Ibéria section from his orchestral triptych Images pour orchestre, and a week later he conducted his cantata La Damoiselle élue. By November 20 Astruc was out of money and was ejected from the theatre, and the sets and costumes were impounded. The following season consisted of operas presented by Covent Garden and the Boston Opera Company.

During most of World War I, the theatre was closed, but the Congress of Allied Women on War Service was held there in August 1918. Pavlova's ballet company presented a short season of dance performances in 1919.

The theatre was purchased by Madame Ganna Walska (Mrs. Harold Fowler McCormick) in 1922.

In 1923 Louis Jouvet was named director of the theatre.:6 The smaller Comédie stage upstage was the home of Jules Romains' long-running medical satire, Dr. Knock (1923), in which Jouvet played the title role.:224 Jouvet also staged Charles Vildrac's Madame Béliard (1925), Bernard Zimmer's Bava the African (1926), Jean Sarment's Leopold the Well-Beloved (1927), and Marcel Achard's Jean of the Moon (1929).:6 He is perhaps best known for directing the premier of three of Jean Giraudoux's plays: Siegfried in 1928, Amphitryon 38 in 1929, and Intermezzo in 1933. 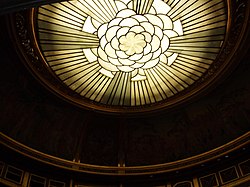 Ceiling of the Théâtre des Champs-Élysées

The theatre shows about three staged opera productions a year, mostly baroque or chamber works, suited to the modest size of its stage and orchestra pit. In addition, it houses an important concert season. It is home to two orchestras: the Orchestre National de France and Orchestre Lamoureux, as well as the French base of the Vienna Philharmonic Orchestra. The Orchestre Philharmonique de Radio France, the Orchestre des Champs-Élysées and Ensemble orchestral de Paris play most of their concerts here too, along with other dance, chamber music, recital and pop events.

Although the theatre is privately owned, it is supported by the Caisse des Dépôts et Consignations, which has owned the building since 1970. The theater houses a restaurant on its roof, called Maison Blanche.

Prices can be expensive for the main stage, and vary widely even for a particular event, from €5 for restricted visibility to €150 for the best seats (April 2006).

The theater, both outside and inside, was featured in the 1973 French espionage movie Le Silencieux [fr]. It appeared in Jan Kounen's 2009 film Coco Chanel & Igor Stravinsky, starring Mads Mikkelsen and Anna Mougalis in the title roles. The film begins with a brief exterior shot followed by an extensive recreation of the original staging of the "Rite of Spring" and the audience reaction.