The Daily Princetonian is the daily independent student newspaper of Princeton University. Founded in 1876, the Princetonian is among the oldest college newspapers in the country. Its alumni include journalists at The New York Times, The Washington Post, and The Wall Street Journal, as well as Pulitzer Prize winners.

Produced by a staff of nearly 200 undergraduate students, the organization has an annual budget of more than $600,000. The Prince has a daily print circulation of 2,000 and its website receives roughly 2,500 hits every day.

The Prince is fully independent from Princeton University. It is directed by a graduate board of trustees, consisting of former editors and business staffers. The paper supports itself financially and does not receive financial support from the university or from alumni donations. The paper currently has an endowment of 1.3 million dollars. No staff member on the 'Princetonian' is paid.

The Daily Princetonian's offices are housed at 48 University Place, Princeton, N.J., on the western edge of the university's main campus. The paper's editorial staff consists entirely of Princeton students. Daily operations at the Prince are run by the editor-in-chief, who directs the editorial side of the paper, and the business manager, who directs the business and financial side. The business manager and the editor-in-chief report independently to the newspaper's board of trustees, in order to prevent business and editorial matters from mixing.

The editor-in-chief and business manager are chosen in December and appoint the remainder of their respective boards. Those boards take control of the newspaper with the beginning of the second semester, in February. The editorial boards serve for two semesters. Typically, the editor-in-chief and business manager begin their service in the spring of their junior year and complete their service in the winter of their senior year. This staggered system was created in part to allow graduating seniors time to finish their senior theses.

The staff is grouped into several sections, including news, sports, opinion, arts and culture, copy editing, multimedia, design, and business.

In December 2006, Larry DuPraz, a long-time employee of the newspaper who directed its publication and guided its editors from 1946 to 1987, died from heart disease at the age of 87. In 2012, the paper's digitized archives was formally launched and named in his honor.

In January 2007, the Prince caused controversy when it published a fictitious editorial in its "joke issue" regarding the Jian Li lawsuit. Some Asian groups complained for its use of offensive stereotypes, which included portrayals of Asian-Americans as people who cook greasy food and wash clothes. The Prince issued a statement concerning its motivations and expectations for the piece, stating that it did not mean to be offensive but rather satirical. 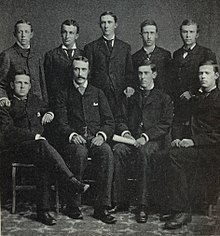 Pictured with the board of editors of the Princetonian in 1878, Woodrow Wilson (seated, second from right) served as managing editor

Retrieved from "https://en.wikipedia.org/w/index.php?title=The_Daily_Princetonian&oldid=1000038240"
Uses material from the Wikipedia article The Daily Princetonian, released under the CC BY-SA 3.0 license.