This article is about the ballet to Stravinsky's 1910 music. For other uses of the word, see Firebird.

The Firebird (French: L'Oiseau de feu; Russian: Жар-птица, romanized: Zhar-ptitsa) is a ballet and orchestral concert work by the Russian-born composer Igor Stravinsky. It was written for the 1910 Paris season of Sergei Diaghilev's Ballets Russes company. The original choreography was by Michel Fokine, who collaborated with Alexandre Benois on a scenario based on the Russian fairy tales of the Firebird and the blessing and curse it possesses for its owner. Its premiere at the Opéra de Paris on 25 June 1910 was an immediate success, catapulting Stravinsky to international fame.

The ballet was not only Stravinsky's professional breakthrough, but also the beginning of his partnership with Diaghilev, which would subsequently produce Petrushka, The Rite of Spring, Pulcinella, Mavra, and Les noces. 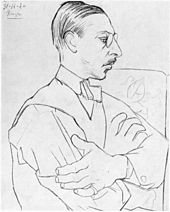 Stravinsky, sketched by Picasso in 1920

Igor Stravinsky was the son of Fyodor Stravinsky, the principal bass at the Imperial Mariinsky Theatre in Saint Petersburg, and Anna (née Kholodovskaya), a competent amateur singer and pianist from an old established Russian family. Fyodor's association with many of the leading figures in Russian music, including Rimsky-Korsakov, Borodin and Mussorgsky, meant that Igor grew up in an intensely musical home. In 1901, Stravinsky began to study law at Saint Petersburg Imperial University, while taking private lessons in harmony and counterpoint. Sensing talent in the young composer's early efforts, Rimsky-Korsakov took Stravinsky under his private tutelage. By the time of his mentor's death in 1908, Stravinsky had produced several works, among them a Piano Sonata in F-sharp minor, a Symphony in E-flat, and a short orchestral piece titled Feu d'artifice ("Fireworks").

In 1909, Stravinsky's Scherzo fantastique and Feu d'artifice were premiered in Saint Petersburg. Among those in the audience was the impresario Sergei Diaghilev, who was about to debut his Ballets Russes in Paris. Diaghilev's intention was to present new works in a distinctively 20th-century style, and he was looking for fresh compositional talent. Impressed by Stravinsky, he commissioned from him orchestrations of Chopin's music for the ballet Les Sylphides.

Alexandre Benois recalled that in 1908 he had suggested to Diaghilev the production of a Russian nationalist ballet, an idea all the more attractive given both the newly awakened French passion for Russian dance and the expensive costs of staging opera. The inspiration of mixing the mythical Firebird with the unrelated Russian tale of Koschei the Deathless possibly came from a popular child's verse by Yakov Polonsky, "A Winter's Journey" (Zimniy put, 1844), which includes the lines:

Benois collaborated with the choreographer Michel Fokine, drawing from several books of Russian fairy tales including the collection of Alexander Afanasyev, to concoct a story involving the Firebird and the evil magician Koschei. The scenery was designed by Aleksandr Golovin and the costumes by Léon Bakst.

Diaghilev first approached the Russian composer Anatoly Lyadov in September 1909 to write the music. There is no evidence that he ever accepted the commission, despite the anecdotal story that he was slow to start composing the work. Nikolai Tcherepnin composed some music for the ballet (which he later used in his The Enchanted Kingdom), but withdrew from the project without explanation after completing only one scene. After deciding against using Alexander Glazunov and Nikolay Sokolov, Diaghilev finally chose the 28-year-old Stravinsky, who had already begun sketching out the music in anticipation of the commission.

Stravinsky would later remark about working with Fokine that it meant "nothing more than to say that we studied the libretto together, episode by episode, until I knew the exact measurements required of the music." Several ideas from works by Rimsky-Korsakov were used in The Firebird. Koschei's "Infernal Dance" borrows the highly chromatic scale Rimsky-Korsakov created for the character Chernobog in his opera Mlada, while the Khorovod uses the same folk tune from his Sinfonietta, Op. 31. The piano score was completed on 21 March 1910 and was fully orchestrated by May, although not before work was briefly interrupted by another Diaghilev commission: an orchestration of Grieg's Kobold, Op. 71, no. 3 for a charity ball dance featuring Vasily Nijinsky.

Soon thereafter, Diaghilev began to organize private sneak previews of The Firebird for the press. French critic Robert Brussel, who attended one of these events, wrote in 1930: 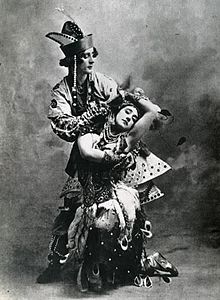 Tamara Karsavina as the Firebird and Michel Fokine as Prince Ivan in the 1910 Ballets Russes production of the ballet.

The Firebird was premiered by the Ballets Russes at the Palais Garnier in Paris on 25 June 1910, conducted by Gabriel Pierné. Even before the first performance, the company sensed a huge success in the making; and every performance of the ballet in that first production, as Tamara Karsavina recalled, met a "crescendo" of success. "Mark him well," Diaghilev said of Stravinsky, "he is a man on the eve of celebrity."

Critics praised the ballet for its integration of decor, choreography and music. "The old-gold vermiculation of the fantastic back-cloth seems to have been invented to a formula identical with that of the shimmering web of the orchestra," wrote Henri Ghéon in Nouvelle revue française, who called the ballet "the most exquisite marvel of equilibrium" and added that Stravinsky was a "delicious musician." Michel-Dimitri Calvocoressi hailed the young composer as the legitimate heir to The Mighty Handful. The ballet’s success also secured Stravinsky's position as Diaghilev's star composer, and there were immediate talks of a sequel, leading to the composition of Petrushka and The Rite of Spring. In Russia, however, reaction was mixed. While Stravinsky's friend Andrey Rimsky-Korsakov spoke approvingly of it, the press mostly took a dim view of the music, with one critic denouncing what he considered its "horrifying poverty of melodic invention." A fellow Rimsky-Korsakov pupil, Jāzeps Vītols, wrote that "Stravinsky, it seems, has forgotten the concept of pleasure in sound. . . [His] dissonances unfortunately quickly become wearying, because there are no ideas hidden behind them."

Sergei Bertensson recalled Sergei Rachmaninoff saying of the music: "Great God! What a work of genius this is! This is true Russia!" Another colleague, Claude Debussy, who later became an admirer took a more sober view of the score: "What do you expect? One has to start somewhere." Richard Strauss told the composer in private conversation that he had made a "mistake" in beginning the piece pianissimo instead of astonishing the public with a "sudden crash." Shortly thereafter he summed up to the press his experience of hearing The Firebird for the first time by saying, "it's always interesting to hear one's imitators." 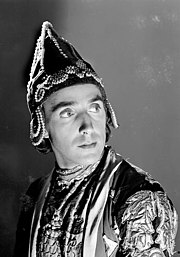 Paul Petrov in the production by the Ballets Russes de Monte-Carlo in Sydney, 1936–1937

The Firebird has been restaged by many choreographers, including George Balanchine and Jerome Robbins (co-choreographers), Graeme Murphy, Alexei Ratmansky, and Yuri Possokhov.

The ballet was revived in 1934 by Colonel Wassily de Basil's company, the Ballets Russes de Monte-Carlo, in a production staged in London, using the original decor and costumes from Diaghilev's company. The company subsequently performed the ballet in Australia, during the 1936–37 tour.

The work was staged by George Balanchine for the New York City Ballet in 1949 with Maria Tallchief as the Firebird, with scenery and costumes by Marc Chagall, and was kept in the repertory until 1965. The ballet was restaged by George Balanchine and Jerome Robbins in 1970 for the New York City Ballet with elaborated scenery by Chagall, and with new costumes by Karinska based on Chagall's for the 1972 Stravinsky Festival that introduced Gelsey Kirkland as the Firebird.

In 1970 Maurice Béjart staged his own version in which the ballet's protagonist was a young man who rose from the ranks of the revolutionists and became their leader. The lead role was danced by Michel Denard.

The Mariinsky Ballet performed the original choreography at Covent Garden in August 2011, as part of their Fokine retrospective.

The National Ballet of Canada created a version of the Firebird for television, occasionally rebroadcast, in which special effects were used to make it appear that the Firebird is in flight.

On 29 March 2012, the American Ballet Theatre premiered the ballet with choreography by Alexei Ratmansky at the Segerstrom Center for the Arts in Costa Mesa, California, starring Misty Copeland.

The Royal Ballet staged 6 performances of the ballet at the Royal Opera House in London in June 2019, with Yasmine Naghdi performing the role of the Firebird. 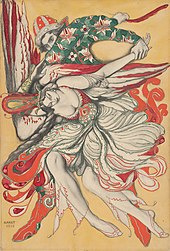 Drawing by Léon Bakst of Tsarevitch Ivan capturing the Firebird.

The ballet centers on the journey of its hero, Prince Ivan. While hunting in the forest, he strays into the magical realm of the evil Koschei the Immortal, whose immortality is preserved by keeping his soul in a magic egg hidden in a casket. Ivan chases and captures the Firebird and is about to kill her; she begs for her life, and he spares her. As a token of thanks, she offers him an enchanted feather that he can use to summon her should he be in dire need.

Prince Ivan then meets thirteen princesses who are under the spell of Koschei and falls in love with one of them. The next day, Ivan confronts the magician and eventually they begin quarrelling. When Koschei sends his minions after Ivan, he summons the Firebird. She intervenes, bewitching the monsters and making them dance an elaborate, energetic dance (the "Infernal Dance").

Exhausted, the creatures and Koschei then fall into a deep sleep. While they sleep, the Firebird directs Ivan to a tree stump where the casket with the egg containing Koschei's soul is hidden. Ivan destroys the egg, and with the spell broken and Koschei dead, the magical creatures that Koschei held captive are freed and the palace disappears. All of the "real" beings, including the princesses, awaken and with one final hint of the Firebird's music (though in Fokine's choreography she makes no appearance in that final scene on-stage), celebrate their victory.

Numbers designated by Stravinsky in the score

The work is scored for a large orchestra with the following instrumentation:

Ivan Bilibin. A warrior – costume design for 1931 performance of The Firebird

Instrumentation: essentially as per the original ballet. The score was printed from the same plates, with only the new endings for the movements being newly engraved.

This suite was created in Switzerland for conductor Ernest Ansermet. When it was originally published, the score contained many mistakes, which were only fixed in 1985.

In 1945, shortly before he acquired American citizenship, Stravinsky was contacted by Leeds Music with a proposal to revise the orchestration of his first three ballets in order to recopyright them in the United States. The composer agreed, setting aside work on the finale of his Symphony in Three Movements. He proceeded to fashion a new suite based on the 1919 version, adding to it and reorchestrating several minutes of the pantomines from the original score.

Reconstruction of the world premiere choreography and design at the Salzburger Pfingstfestspiele 2013. Ballet of the Mariinsky Theatre, Saint Petersburg.

Excerpts from The Firebird were used in Bruno Bozzetto's animated film Allegro Non Troppo and in Fantasia 2000.

Saviour Pirotta and Catherine Hyde's picture book, Firebird, is based on the original stories that inspired the ballet, and was published in 2010 to celebrate the ballet's centenary.

The influence of The Firebird has been felt beyond classical music. Stravinsky was an important influence on Frank Zappa, who used the melody from the Berceuse in his 1967 album Absolutely Free, in the Amnesia Vivace section of the "Duke of Prunes" suite (along with a melody from The Rite of Spring). Prog rock band Yes has regularly used the ballet's Finale as their "walk-on" music for concerts since 1971. During the 1980s and 1990s, the chord which opens the Infernal Dance became a widely used orchestra hit sample in music, specifically within new jack swing.

It was used in the opening ceremony of Sochi 2014 during the Cauldron Lighting segment.

Retrieved from "https://en.wikipedia.org/w/index.php?title=The_Firebird&oldid=1005464961"
Uses material from the Wikipedia article The Firebird, released under the CC BY-SA 3.0 license.