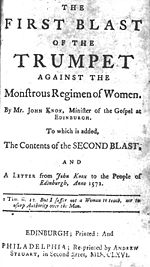 The title page of a 1766 edition of The first blast, with modernised spelling of the title

The First Blast of the Trumpet Against the Monstruous Regiment of Women is a polemical work by the Scottish reformer John Knox, published in 1558. It attacks female monarchs, arguing that rule by females is contrary to the Bible.

The title is frequently found with the spelling slightly modernised, e.g. "monstrous regiment" or "monstrous regimen". It is clear however that the use of "regimen[t]" meant "rule" and should not be confused with "regiment" as in a section of an armed force.

The book was written anonymously from Geneva, Switzerland, against the female sovereigns of his day, particularly Mary of Guise, Dowager Queen of Scotland and regent to her daughter Mary, Queen of Scots, and Queen Mary I of England. Knox, a staunch Protestant Reformer, opposed the Catholic queens on religious grounds, and used them as examples to argue against female rule over men generally. Building on his premise that, according to Knox's understanding of the Bible, "God, by the order of his creation, has [deprived] woman of authority and dominion" and from history that "man has seen, proved, and pronounced just causes why it should be", he argued the following with regard to the specific role of women bearing authority:

His polemic against female rulers had negative consequences for him when Elizabeth I succeeded her half-sister Mary I as Queen of England; Elizabeth was a supporter of the Protestant cause, but took offence at Knox's words about female sovereigns. Her opposition to him personally became an obstacle to Knox's direct involvement with the Protestant cause in England after 1559.

Uses material from the Wikipedia article "The First Blast of the Trumpet Against the Monstruous Regiment of Women", released under the CC BY-SA 3.0 license.