Il bacio (Italian pronunciation: [il ˈbaːtʃo]; The Kiss) is an 1859 painting by the Italian artist Francesco Hayez. It is possibly his best known work. This painting conveys the main features of Italian Romanticism and has come to represent the spirit of the Risorgimento. It was commissioned by Alfonso Maria Visconti di Saliceto, who donated it to the Pinacoteca di Brera after his death.

After the defeat of Napoleonic France in the 19th century, the Congress of Vienna was held in 1815 to redraw the map of Europe. Italy had a very marginal role compared to other European countries and was slated to be divided into several states. Every state was either ruled directly by or strongly influenced by the Habsburgs of the Austrian Empire. This fragmentation went against the growing nationalist sentiment for Italy's unification and caused the creation of secret societies with democratic-radical orientations, like the Carboneria and Young Italy. Although these associations were unsuccessful, their role was fundamental in shaping public opinion.

The first war of Italian independence (1848) was a failure, but by 1859 the secret agreement between Napoleon III and Camillo Benso, Count of Cavour stipulated the formation of an anti-Austrian alliance. The contribution of France was considered crucial, as the Austrian armies were defeated by the alliance in the Kingdom of Lombardy–Venetia. This victory initiated the unification process: the Kingdom of Italy was proclaimed a few years later, in 1861.

It was during this period that Francesco Hayez painted his Kiss. Mindful of the bloody repression of the nationalist movement, the artist decided to disguise the ideals of conspiracy and the struggle against the invaders under a representation of past events. Through the adoption of ambiguous, opaque communication schemes, the artist succeeded in effectively escaping the censorship measures implemented by the authorities.

The first version of The Kiss was commissioned by Count Alfonso Maria Visconti of Saliceto. Hayez, who was very well known amongst Milanese patriots, was asked from the Count to depict the hopes associated with the alliance between France and the Kingdom of Sardinia.

The artwork was created in 1859 and presented at the Pinacoteca di Brera on 9 September, and was later on hung up as a decoration in the luxurious residence of the Visconti family for more than twenty-five years. It is only in 1886, a year before his death, that the Count presented the canvas back to the Pinacoteca di Brera, where it is still exhibited today in room XXXVII.

Although this oil version is undoubtedly the most famous, Hayez produced three other versions (two oil and one watercolor) of the painting. The second redaction was painted in 1861 for the Mylius family and it was sent to Paris to be exhibited in the Exposition Universelle in 1867. In 2008 this version was sold at Sotheby's auction for the sum of 780,450 pounds. The difference between this painting and the previous one is the woman’s dress, this time colored in white. The third version is the only one to have been transposed onto watercolor on paper, it has an oval shape and was painted in 1859. It was donated by Hayez to Carolina Zucchi and is now exhibited at the Pinacoteca Ambrosiana in Milan.

The last painting differs from the original because of the addition of a white cloth lying on the steps beside the couple and the bright green paint used for the man's mantle.

The painting represents a couple from the Middle Ages, embracing while they kiss each other. It is among the most passionate and intense representations of a kiss in the history of Western art. The girl leans backwards, while the man bends his left leg so as to support her, simultaneously placing a foot on the step next to him as though poised to go at any moment. The couple, though at the center of the painting, are not recognizable, as Hayez wanted the action of the kissing to be at the center of the composition. In the left part of the canvas shadowy forms lurk in the corner to give an impression of conspiracy and danger.

The geometric and perspective scheme of the Kiss is set on a series of diagonals which follow the course of the steps and converge to the vanishing point, placed to the left of the two lovers. These lines represent the framework of the painting and brings the observer’s attention to the couple.

The chromatism of the painting is inherited from the Renaissance schools of the Venetian masters where Hayez conducted his first studies. The brown of the cloak and the red of the boy's tights blend harmoniously with the light blue in the dress of the girl, while the neutral shades of the background help the couple stand out. A light, coming from an external source placed to the left of the picture, hits the whole scene homogeneously: its reflections enhances the silky dress of the girl, emphasizing also the pavement and the bricks on the wall.

This painting has been regarded as a symbol of Italian Romanticism, of which it encompasses many features. On a more superficial level, the painting is the representation of a passionate kiss, which puts itself in accordance with the principles of Romanticism. Therefore, it emphasizes deep feelings rather than rational thought, and presents a reinterpretation and reevaluation of the Middle Ages in a patriotic and nostalgic tone.

On a deeper level, the painting symbolizes the romantic, nationalist and patriotic ideals of the Risorgimento; this interpretation is endorsed by several iconographic elements.

The imminent farewell between the lovers is suggested by the man’s foot temporarily resting on the step and the tight grasp with which his beloved is holding him. This represents both the necessity that he must leave whilst showing the danger of being a patriot. Other elements are the dagger hidden in the mantle, a sign of the imminent rebellion against the Habsburg invader, and the date of the painting (1859), the year of the second war of independence. However the most obvious allegory in the painting is its chromatic range, which summarizes the political changes that involved Italy in the 19th century. In the Brera version, the blue of the woman's dress and the bright red of the young man's tights allude to the colors in the French flag.

Hayez intended to pay tribute to the French nation, now allied with Italy. In the three subsequent versions the allegorical-patriotic connotations became even more obvious: in the 1861 version, the dress of the girl assumed a neutral white tone, as a tribute to the proclamation of the Kingdom of Italy. In the fourth version, Italy manifests itself instead in the clothes of the man, who now wears a green cloak, symbolizing the Italian national banner. 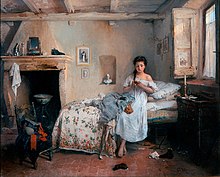 Gerolamo Induno, Sadness (1862). The Kiss is depicted in this painting, hanging on the wall.

The Kiss has enjoyed extensive popularity from its exhibition onward, especially in Italy, and has been the subject of much commentary. In the 1920s the art director of Perugina, one of Italy's leading chocolate manufacturers, revised the image of the painting and created the typical blue box of the popular "Baci" chocolates with the picture of two lovers. In 1954 the great Italian director Luchino Visconti took inspiration from the painting for one of the leading scenes of his masterpiece movie, Senso.

Retrieved from "https://en.wikipedia.org/w/index.php?title=The_Kiss_(Hayez)&oldid=989102563"
Uses material from the Wikipedia article The Kiss (Hayez), released under the CC BY-SA 3.0 license.