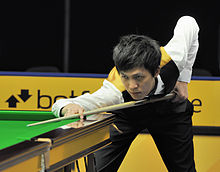 Un-Nooh first entered the professional tour for the 2009/10 season by winning the 2008 IBSF World Snooker Championship. He dropped off the main tour after just one season.

He received the Thai nomination to compete on the snooker tour for the 2012/2013 season. As a new player on the tour he needed to win four matches to reach the main stage of the ranking events. Un-Nooh lost in the third qualifying round in three of the first four ranking events of the season. In September, it was announced that his match at the Players Tour Championship – Event 3 against Steve Davis was under investigation due to unusual betting patterns. Un-Nooh moved from an 8/11 odds-on favourite to 11/8 against just before the match started and went on to lose 0–4 to the six-time world champion. In November, World Snooker released a statement to confirm that there was insufficient evidence and no further action would be taken against Un-Nooh. He reached the final qualifying round for the UK Championship and the World Open, but lost to Michael Holt and Ryan Day respectively. Un-Nooh played in nine of the ten Players Tour Championship Events during the season, enjoying best results of three last 16 defeats in European Tour Events, to finish 46th on the PTC Order of Merit. His season ended when he was beaten 3–10 by Ben Woollaston in the third round of World Championship Qualifying, which saw him finish the year ranked world number 69.

Un-Nooh lost in the qualifying rounds for the first four ranking events of the 2013/2014 season, but then beat Gerard Greene 6–5 to reach the International Championship in Chengdu, China. In his first appearance in the main draw of a ranking event he thrashed Zhang Anda 6–1, before losing by the same scoreline to Neil Robertson in the last 32. However, the experience seemed to kick start Un-Nooh's season as in 2014 he played at the venue stage of four of the remaining six ranking events. He beat Ronnie O'Sullivan 5–4 in qualifying for the German Masters, with the reigning world champion playing high risk exhibition shots throughout the match, but Un-Nooh was whitewashed 5–0 by Jack Lisowski in the first round. At the World Open, Un-Nooh led Stephen Maguire 3–0, before the world number eight rallied to win four frames in a row. The match went into a deciding frame in which Un-Nooh made a break of sixty only for Maguire to get a chance to win, but he missed the final brown to hand Un-Nooh a big scalp. He then reached the last 16 of a ranking event for the first time by beating Andrew Higginson 5–1 and lost 5–2 to Graeme Dott, despite missing the final pink when on a 147 break during the match. Un-Nooh advanced to the last 32 of the China Open by whitewashing 1997 world champion Ken Doherty 5–0, before losing 5–3 against Ding Junhui. His performances during the campaign saw him end it in the top 64 in the world rankings for the first time as he was placed 59th.

Un-Nooh qualified for the International Championship for the second year in a row, but was edged out 6–5 by Fergal O'Brien in the first round. He also lost in a deciding frame in the first round of the UK Championship against Robin Hull despite making breaks of 137 and 117 during the match. Un-Nooh won five games to reach the semi-finals of the Xuzhou Open where he beat Mark Williams 4–1 to play in his first final in a professional event. He was defeated 4–1 by Joe Perry, but he described Un-Nooh as an exceptional talent after the match.

Un-Nooh defeated defending champion Ding Junhui in the first round of the Indian Open, calling it his biggest win after the match. He also stated that he didn't feel he could win the title. Nevertheless, he whitewashed Luca Brecel 4–0 and then recorded wins over Jamie Jones and Mark Davis to reach the semi-finals of a ranking event for the first time. Un-Nooh compiled a trio of half century breaks to race into a 3–0 lead over Ricky Walden, but would go on to lose 4–3. His Asian final saw him finish fourth on their Order of Merit to make his debut in the Grand Final, where he was knocked out 4–1 by Mark Williams in the first round. Un-Nooh's rise up the rankings continued as he ended the year 49th in the world.

Un-Nooh scored his first professional win at the 2015 Six-red World Championship in Bangkok, Thailand. He beat world champion Stuart Bingham and former UK Champion Judd Trump en route to a final with China's Liang Wenbo, which he won 8–2 in frames. Un-Nooh missed the final black in attempting to make a maximum break in his 6–2 loss to Neil Robertson at the UK Championship. He appeared on Channel 4 show TFI Friday a few days later to recreate the shot and this time potted it. At the World Grand Prix, Un-Nooh eliminated Marco Fu 4–3 and Mark Allen 4–2 to reach the quarter-finals. He made breaks of 97, 84 and 74 to lead 3–1, but Ding Junhui would take the match 4–3. Incredibly in the final round of World Championship qualifying Un-Nooh missed another 147 final black. He did make a 144 later on in the match, but his opponent Anthony McGill won it 10–7. Un Nooh increased his ranking by 16 places over the year to end it as the world number 33.

Un-Nooh knocked out world number one Mark Selby 5–3 in the second round of the World Open and then whitewashed Alan McManus 5–0 and beat Anthony McGill 5–2. In the semi-finals he suffered a 6–1 loss to Ali Carter. In the third round of the Paul Hunter Classic against Kurt Maflin, Un-Nooh finally made his first professional 147 break after twice missing the final black the previous season. It earned him £40,000 and he won the match 4–1, before narrowly beating Mark Allen and David Grace both 4–3 to play in the semi-finals of a ranking tournament for the second successive event. Un-Nooh lost 4–2 against Tom Ford. He struggled to build on this afterwards as he could not win a first round match until the 2017 Welsh Open, where he beat Ben Woollaston 4–0 and then saw off Ryan Day 4–1, before being defeated 4–1 by Barry Hawkins.