Thomas Jermaine Bryant (born July 31, 1997) is an American professional basketball player for the Washington Wizards of the National Basketball Association (NBA). He played college basketball for the Indiana Hoosiers from 2015 to 2017.

Bryant played basketball at Bishop Kearney, where as a sophomore he led his team to a 17-8 record, the 2013 New York Class AA Tournament crown, and the New York Federation Tournament of Champions.

After his sophomore year, Bryant transferred to Huntington Prep School in Huntington, West Virginia during the 2014 school year. As a junior, he averaged 13.9 points, 12.9 rebounds and 2.8 blocks per game. While there, he played on the AAU team, Team SCAN on the Nike Elite Youth Basketball League Circuit. On January 3, 2015, Bryant scored 23 points and 12 rebounds in a 89–49 win over Whitney Young. As a senior, Bryant averaged 17.3 points, 11.6 rebounds, 4.5 blocks and 2.5 steals per game. He was ranked the 20th best recruit in the 2015 class by ESPN and was recruited heavily by many schools, including Indiana, Kentucky, Syracuse, UCLA, and other power conference schools. However, his final decision came down to Indiana and Syracuse. According to Bryant's mother, who was heavily in favor of Syracuse, " [he] picked Indiana because Syracuse's basketball program was in chaos." While Bryant was trying to decide which school to attend, Syracuse was in the middle of an NCAA investigation, which eventually led to the loss of 12 scholarships over the next four years, 108 vacated wins, and Jim Boeheim being suspended for the first 9 games of the 2015-2016 ACC season.

Bryant's final verbal commitment to Indiana was televised live on April 4, 2015 during the Dick's Sporting Goods National Tournament on ESPN. 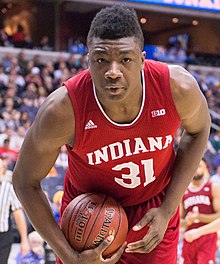 Bryant had a break out performance in an 86-65 win against Creighton. He recorded 17 points, 7 rebounds, and 4 blocks in the Hoosiers win. Bryant contributed 19 points and five rebounds in a win over Kentucky in the NCAA Tournament. Bryant averaged 11.9 points and 5.8 rebounds per game as a freshman. After the season, Bryant was named both Big Ten All-Freshman team as well as Third-team All-Big Ten.

Bryant announced his return for his sophomore year. His shooting percentage declined as a sophomore, but Bryant averaged 12.6 points, 6.6 rebounds and 1.5 blocks per game.

The Los Angeles Lakers assigned Thomas Bryant to their G League affiliate the South Bay Lakers. Following the 2017–18 season, he was named to the All-NBA G League First Team.

On July 2, 2018, Bryant was claimed off waivers by the Washington Wizards.

On December 22, 2018, Bryant shot 14-14 and scored a career-high 31 points against the Phoenix Suns, tying for the fourth most field goals made without a miss in NBA history, with only Wilt Chamberlain exceeding the 14 field goal mark.

On January 10, 2021, the Washington Wizards announced that Bryant had suffered a partially torn anterior cruciate ligament in his left knee during a 124–128 loss to Miami Heat a day ago.