Tioga County is a county located on the central northern border of the U.S. state of Pennsylvania. As of the 2010 census, the population was 41,981. Its county seat is Wellsboro. The county was created on March 26, 1804, from part of Lycoming County and later organized in 1812. It is named for the Tioga River.

The county was originally settled by migrants of "Yankee" stock (migrants from New England and the western part of New York who were descended from the English Puritans of colonial New England). With the opening of a rough wagon road to the source of the Tioga River, New England settlers poured over the Allegheny Mountains. Tioga County resembled upstate New York more than it did eastern Pennsylvania, as its population primarily consisted of settlers from New England. Developers and land speculators laid out roads, established post routes, erected public buildings erected and people were invited to move there. The original settlers were entirely of New England origins or were Yankees from upstate New York, whose families had recent ancestors in New England, with migration taking place in the aftermath of the Revolutionary War. Tioga County was largely culturally contiguous with New England culture, which was influential across the Northern Tier of the United States through its migrants.

In the late 19th and early 20th centuries, the county accepted more immigrants from Ireland, Germany and eastern Europe, who came to work in the coal mines. A number of them were Roman Catholic, introducing more diversity into the mixture of religions here.

Tioga County is one of the most heavily Republican represented counties in Pennsylvania. This has a long history as Abraham Lincoln reportedly received 78.57% of the county's vote in the 1860 Presidential election. Since Abraham Lincoln the county has voted for the non-Republican presidential candidate only two times. The first was Theodore Roosevelt's 1912 run as a Progressive and the second was Lyndon B. Johnson's landslide in 1964. In 2004, George W. Bush received 12,019 votes (68%) to 5,437 votes (31%) for John Kerry. In 2008 John McCain received 62.7% of the vote. In 2006, Rick Santorum and Lynn Swann both had significant victories in Tioga County despite their defeats statewide. The last two sitting Board of Commissioners have been all Republican candidates, and Tioga County is the only county in Pennsylvania with all three sitting commissioners being from a single party. This was due to the success of write in campaigns conducted by Roger Bunn in 2011 and Mark Hamilton in 2015.

Register of wills / recorder of deeds

In March 2012, the Tioga County Commissioners approved a marcellus shale impact fee ordinance. The Commissioners anticipated $5.5 million to $6 million in annual impact fee revenue. In 2012, under Governor Corbett, the Pennsylvania General Assembly passed a bill that authorizes an impact fee be collected on marcellus shale wells. Regulations and processes for distribution of the money are governed by the Pennsylvania Utility Commission (PUC). Annual reports on the number of wells and revenues taken in are made public on the PUC website.

In 2016, the Pennsylvania Utility Commission lowered the Impact fee on shale gas wells.

The use of the impact shale fee funds is limited by state law to:

In 2014 Tioga County received an impact fee disbursement of $3,593,564.21 which was among the top seven Pennsylvania counties receiving impact funds. In 2014, there were 839 Marcellus shale wells in Tioga County. Statewide the top county recipient was Washington County which received $6,512,570.65 in 2014. 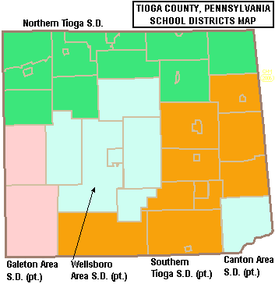 As reported by EdNA, Pennsylvania Department of Education, June 2010.

There are three Pennsylvania state parks in Tioga County. 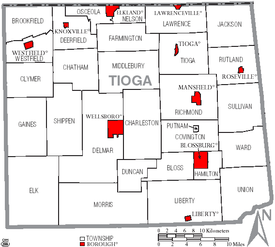 Under Pennsylvania law, there are four types of incorporated municipalities: cities, boroughs, townships, and, in at most two cases, towns. The following boroughs and townships are located in Tioga County:

Census-designated places are geographical areas designated by the U.S. Census Bureau for the purposes of compiling demographic data. They are not actual jurisdictions under Pennsylvania law. Other unincorporated communities, such as villages, may be listed here as well.

The population ranking of the following table is based on the 2010 census of Tioga County.