Trophic cascades are powerful indirect interactions that can control entire ecosystems, occurring when a trophic level in a food web is suppressed. For example, a top-down cascade will occur if predators are effective enough in predation to reduce the abundance, or alter the behavior, of their prey, thereby releasing the next lower trophic level from predation (or herbivory if the intermediate trophic level is a herbivore).

The trophic cascade is an ecological concept which has stimulated new research in many areas of ecology. For example, it can be important for understanding the knock-on effects of removing top predators from food webs, as humans have done in many places through hunting and fishing.

A top-down cascade is a trophic cascade where the top consumer/predator controls the primary consumer population. In turn, the primary producer population thrives. The removal of the top predator can alter the food web dynamics. In this case, the primary consumers would overpopulate and exploit the primary producers. Eventually there would not be enough primary producers to sustain the consumer population. Top-down food web stability depends on competition and predation in the higher trophic levels. Invasive species can also alter this cascade by removing or becoming a top predator. This interaction may not always be negative. Studies have shown that certain invasive species have begun to shift cascades; and as a consequence, ecosystem degradation has been repaired.

In a subsidy cascade, species populations at one trophic level can be supplemented by external food. For example, native animals can forage on resources that don't originate in their same habitat, such a native predators eating livestock. This may increase their local abundances thereby affecting other species in the ecosystem and causing an ecological cascade. For example, Luskin et al (2017) found that native animals living in protected primary rainforest in Malaysia found food subsidies in neighboring oil palm plantations. This subsidy allowed native animal populations to increase, which then triggered powerful secondary ‘cascading’ effects on forest tree community. Specifically, crop-raiding wild boar (Sus scrofa) built thousands of nests from the forest understory vegetation and this caused a 62% decline in forest tree sapling density over a 24-year study period. Such cross-boundary subsidy cascades may be widespread in both terrestrial and marine ecosystems and present significant conservation challenges.

These trophic interactions shape patterns of biodiversity globally. Humans and climate change have affected these cascades drastically. One example can be seen with sea otters (Enhydra lutris) on the Pacific coast of the United States of America. Over time, human interactions caused a removal of sea otters. One of their main prey, the pacific purple sea urchin (Strongylocentrotus purpuratus) eventually began to overpopulate. The overpopulation caused increased predation of giant kelp (Macrocystis pyrifera). As a result, there was extreme deterioration of the kelp forests along the California coast. This is why it is important for countries to regulate marine and terrestrial ecosystems.

Predator-induced interactions could heavily influence the flux of atmospheric carbon if managed on a global scale. For example, a study was conducted to determine the cost of potential stored carbon in living kelp biomass in sea otter (Enhydra lutris) enhanced ecosystems. The study valued the potential storage between $205 million and $408 million dollars (US) on the European Carbon Exchange (2012).

Aldo Leopold is generally credited with first describing the mechanism of a trophic cascade, based on his observations of overgrazing of mountain slopes by deer after human extermination of wolves. Nelson Hairston, Frederick E. Smith and Lawrence B. Slobodkin are generally credited with introducing the concept into scientific discourse, although they did not use the term either. Hairston, Smith and Slobodkin argued that predators reduce the abundance of herbivores, allowing plants to flourish. This is often referred to as the green world hypothesis. The green world hypothesis is credited with bringing attention to the role of top-down forces (e.g. predation) and indirect effects in shaping ecological communities. The prevailing view of communities prior to Hairston, Smith and Slobodkin was trophodynamics, which attempted to explain the structure of communities using only bottom-up forces (e.g. resource limitation). Smith may have been inspired by the experiments of a Czech ecologist, Hrbáček, whom he met on a United States State Department cultural exchange. Hrbáček had shown that fish in artificial ponds reduced the abundance of zooplankton, leading to an increase in the abundance of phytoplankton.

Although the existence of trophic cascades is not controversial, ecologists have long debated how ubiquitous they are. Hairston, Smith and Slobodkin argued that terrestrial ecosystems, as a rule, behave as a three trophic level trophic cascade, which provoked immediate controversy. Some of the criticisms, both of Hairston, Smith and Slobodkin's model and of Oksanen's later model, were:

Antagonistically, this principle is sometimes called the "trophic trickle". 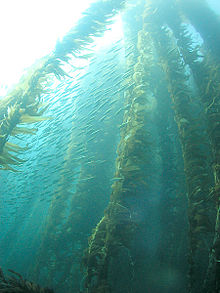 Healthy Pacific kelp forests, like this one at San Clemente Island of California's Channel Islands, have been shown to flourish when sea otters are present. When otters are absent, sea urchin populations can irrupt and severely degrade the kelp forest ecosystem.

Although Hairston, Smith and Slobodkin formulated their argument in terms of terrestrial food chains, the earliest empirical demonstrations of trophic cascades came from marine and, especially, aquatic ecosystems. Some of the most famous examples are:

Subsequent research has documented trophic cascades in terrestrial ecosystems, including:

Critics pointed out that published terrestrial trophic cascades generally involved smaller subsets of the food web (often only a single plant species). This was quite different from aquatic trophic cascades, in which the biomass of producers as a whole were reduced when predators were removed. Additionally, most terrestrial trophic cascades did not demonstrate reduced plant biomass when predators were removed, but only increased plant damage from herbivores. It was unclear if such damage would actually result in reduced plant biomass or abundance. In 2002 a meta-analysis found trophic cascades to be generally weaker in terrestrial ecosystems, meaning that changes in predator biomass resulted in smaller changes in plant biomass. In contrast, a study published in 2009 demonstrated that multiple species of trees with highly varying autecologies are in fact heavily impacted by the loss of an apex predator. Another study, published in 2011, demonstrated that the loss of large terrestrial predators also significantly degrades the integrity of river and stream systems, impacting their morphology, hydrology, and associated biological communities.

The critics' model is challenged by studies accumulating since the reintroduction of gray wolves (Canis lupus) to Yellowstone National Park. The gray wolf, after being extirpated in the 1920s and absent for 70 years, was reintroduced to the park in 1995 and 1996. Since then a three-tiered trophic cascade has been reestablished involving wolves, elk (Cervus elaphus), and woody browse species such as aspen (Populus tremuloides), cottonwoods (Populus spp.), and willows (Salix spp.). Mechanisms likely include actual wolf predation of elk, which reduces their numbers, and the threat of predation, which alters elk behavior and feeding habits, resulting in these plant species being released from intensive browsing pressure. Subsequently, their survival and recruitment rates have significantly increased in some places within Yellowstone's northern range. This effect is particularly noted among the range's riparian plant communities, with upland communities only recently beginning to show similar signs of recovery.

Examples of this phenomenon include: 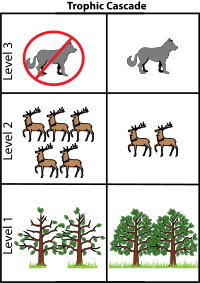 This diagram illustrates trophic cascade caused by removal of the top predator. When the top predator is removed the population of deer is able to grow unchecked and this causes over-consumption of the primary producers.

There are a number of other examples of trophic cascades involving large terrestrial mammals, including:

In addition to the classic examples listed above, more recent examples of trophic cascades in marine ecosystems have been identified: