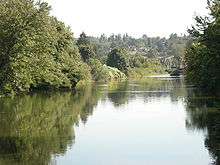 Tukwila is a community of communities, with residents of many diverse origins living in the city. A large commercial center draws workers and consumers to the city daily; industry thrives with the confluence of rivers, freeways, railroads, and Seattle–Tacoma International Airport.

The earliest people in Tukwila were the Duwamish, who made their homes along the Black and Duwamish rivers. The name "Tukwila" is the Chinook Jargon word for "nut" or "hazelnut", referring to the hazelnut trees that grew in the area. The Duwamish lived in cedar longhouses, hunted and fished, picked wild berries, and used the river for trade with neighboring peoples.

In 1853, the first white settler was Joseph Foster, a Canadian pioneer who had traveled to the Pacific Northwest from Wisconsin. Foster would become known as the "Father of Tukwila" and represented King County in the Washington Territorial Assembly for 22 years. Today, the site of Foster's home on the banks of the Duwamish River is part of Fort Dent Park, which also served as a military base during the 1850s Indian Wars. Foster's name is memorialized in the Foster neighborhood of Tukwila, where Foster High School is located.

In the early years, the small village grew into an agricultural center and remained a trading point in the upper Duwamish River Valley. Population began to grow and industry followed, largely farm-oriented commerce. Early electric trains traveled along Interurban Avenue in Tukwila, connecting to Renton and a line to Tacoma. The Interurban Railroad operated a commuter line from 1902 to 1928, making it possible to travel from Seattle to Tacoma in less than an hour. The first macadam paved road in Washington state was in Tukwila and bears the name of this new method of street paving. One of the earliest paved military roads is located in the city.

Tukwila was incorporated as a city in 1908. The city's first mayor was Joel Shomaker, a newspaperman. Among the city's first council members was Del Adelphia, a famous magician.

Tukwila is divided into several neighborhoods by the city government for planning purposes. The 2015 Comprehensive Land Use Plan identifies them as:

There were 7,157 households of which 33.3% had children under the age of 18 living with them, 36.6% were married couples living together, 13.8% had a female householder with no husband present, 7.2% had a male householder with no wife present, and 42.4% were non-families. 32.2% of all households were made up of individuals and 5.9% had someone living alone who was 65 years of age or older. The average household size was 2.64 and the average family size was 3.42.

There were 7,186 households out of which 28.2% had children under the age of 18 living with them, 36.4% were married couples living together, 12.4% had a female householder with no husband present, and 45.0% were non-families. 34.3% of all households were made up of individuals and 5.6% had someone living alone who was 65 years of age or older. The average household size was 2.38 and the average family size was 3.09.

According to the Uniform Crime Report statistics submitted to the Federal Bureau of Investigation (FBI) in 2015, there were 151 violent crimes and 3,336 property crimes. Of these, the violent crimes consisted of one murder, 21 rapes, 62 robberies, and 66 aggravated assaults, while 209 burglaries, 2,669 larceny-thefts, 458 motor vehicle thefts and 4 arson defined the property offenses.

Tukwila's location at the confluence of rivers, freeways and railroads has made it valuable as a center of commerce. Westfield Southcenter (formerly Southcenter Mall), Puget Sound's largest shopping complex, is located in Tukwila, as well as a number of Boeing corporation facilities. Tukwila is also the location of several Internet and Corporate datacenters, including Microsoft, Internap, the University of Washington, Savvis, AboveNet, digital.forest, HopOne, and Fortress Colocation, these are mostly located in Sabey Corporation's Intergate Seattle campus near Boeing Field. It is only 5 minutes from Seattle-Tacoma International Airport. The city has rail service from Amtrak Cascades and the Sound Transit Sounder commuter rail at Tukwila station, as well as Sound Transit Link light rail service at Tukwila International Boulevard station. Approximately 45,000 people work in Tukwila.

According to the city's 2016 Comprehensive Annual Financial Report, the top employers in the city are:

The Museum of Flight is an air and space museum located in the extreme northern part of Tukwila, adjacent to Boeing Field. Tukwila is also home to the Rainier Symphony, which conducts several performances each year at the Foster Performing Arts Center in Tukwila.

In the 1990s and 2000s, "visiting Tukwila" was used as a euphemism for marital intercourse by Seattle Times columnist Erik Lacitis.