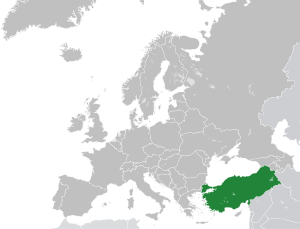 A map depicting the locations of the Turkish Straits, with the Bosphorus in red, and the Dardanelles in yellow. The sovereign national territory of Turkey is highlighted in green. 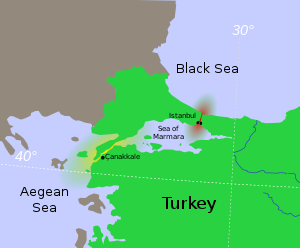 The Bosphorus (red), the Dardanelles (yellow), and the Sea of Marmara in between, are known collectively as the Turkish Straits

Satellite image of the Bosphorus, taken from the International Space Station in April 2004. The body of water at the top is the Black Sea, the one at the bottom is the Marmara Sea, and the Bosphorus is the winding vertical waterway that connects the two. The western banks of the Bosphorus constitute the geographic starting point of the European continent, while the banks to the east are the geographic beginnings of the continent of Asia. The city of Istanbul is visible along both banks. 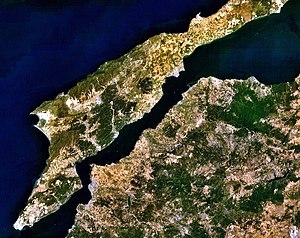 View of the Dardanelles, taken from the Landsat 7 satellite in September 2006. The body of water at the upper left is the Aegean Sea, while the one on the upper right is the Sea of Marmara. The long, narrow upper peninsula is Gallipoli (Turkish: Gelibolu), and constitutes the banks of the continent of Europe, while the lower peninsula is Troad (Turkish: Biga) and constitutes the banks of the continent of Asia. The Dardanelles is the tapered waterway running diagonally between the two peninsulas, from the northeast to the southwest. The city of Çanakkale is visible along the shores of the lower peninsula, centered at the only point where a sharp outcropping juts into the otherwise-linear Dardanelles.

The Turkish Straits (Turkish: Türk Boğazları) are two internationally significant waterways in northwestern Turkey. The straits create a series of international passages that connect the Aegean and Mediterranean seas to the Black Sea. They consist of the Dardanelles and the Bosphorus. The straits are on opposite ends of the Sea of Marmara. The straits and the Sea of Marmara are part of the sovereign sea territory of Turkey and subject to the regime of internal waters.

Located in the western part of the landmass of Eurasia, the Turkish Straits are conventionally considered the boundary between the continents of Europe and Asia, as well as the dividing line between European Turkey and Asian Turkey. Owing to their strategic importance in international commerce, politics, and warfare, the Turkish Straits have played a significant role in European and world history. Since 1936, they have been governed in accordance with the Montreux Convention.

As maritime waterways, the Turkish Straits connect various seas along the Eastern Mediterranean, the Balkans, the Near East, and Western Eurasia. Specifically, the Straits allows maritime connections from the Black Sea all the way to the Aegean and Mediterranean Seas, the Atlantic Ocean via Gibraltar, and the Indian Ocean through the Suez Canal, making them crucial international waterways, in particular for the passage of goods coming in from Russia.

The Turkish Straits are made up of the following waterways;

The Straits have had major maritime strategic importance at least since Bronze-age armies fought the Trojan War near the Aegean entrance, and the narrow crossings between Asia and Europe have provided migration and invasion routes (for Persians, Galatians, and Turks, for example) for even longer. In the declining days of the Ottoman Empire the "Straits Question" involved the diplomats of Europe and the Ottomans.

By the terms of the London Straits Convention concluded on July 13, 1841 between the Great Powers of Europe— Russia, the United Kingdom, France, Austria and Prussia—the "ancient rule" of the Ottoman Empire was re-established by closing the Turkish straits to all warships whatsoever, barring those of the Ottoman Sultan's allies during wartime.

That treaty became one in a series dealing with access to the Bosphorus, the Sea of Marmara, and the Dardanelles. It evolved from the secret 1833 Treaty of Hünkâr İskelesi (Unkiar Skelessi), in which the Ottoman Empire guaranteed exclusive use of the Straits to "Black Sea Powers" (i.e., Ottoman Empire and Russian Empire) warships in the case of a general war.

The Straits became especially important in the course of World War I (1914-1918) as a potential link between the Entente powers' Eastern and Western Fronts. Anglo-French naval forces failed to take control of the Dardanelles (February - March 1915), but in the secret Straits Agreement diplomacy of March-April 1915 the members of the Triple Entente agreed - in the event of victory in World War I - to cede Ottoman territory controlling and overlooking the Straits to the Russian Empire. Anglo-French troops then launched the Gallipoli campaign, an ultimately unsuccessful operation to take control of the Straits following amphibious landings on the Gallipoli Peninsula (April 1915 to January 1916). The revolutions in Petrograd in 1917 ultimately stalled Russia's own plans to seize the Straits.

The modern treaty controlling access is the 1936 Montreux Convention Regarding the Regime of the Turkish Straits, which remains in force as of 2020[update]. This Convention gives the Republic of Turkey control over warships entering the straits but guarantees the free passage of civilian vessels in peacetime.