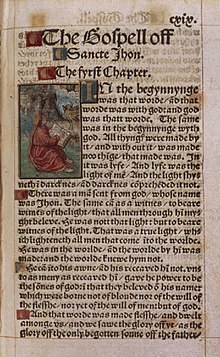 The term Tyndale's Bible is not strictly correct, because Tyndale never published a complete Bible. That task was completed by Miles Coverdale who supplemented Tyndale's translations with his own to produce the first complete printed Bible in English in 1535. Prior to his execution Tyndale had only finished translating the entire New Testament and roughly half of the Old Testament. Of the latter, the Pentateuch, Jonah and a revised version of the book of Genesis were published during his lifetime. His other Old Testament works were first used in the creation of the Matthew Bible and also heavily influenced every major English translation of the Bible that followed.

The chain of events that led to the creation of Tyndale’s New Testament possibly began in 1522, the year Tyndale acquired a copy of Martin Luther's German New Testament. Inspired by Luther’s work, Tyndale began a translation into English using a Greek text compiled by Erasmus from several manuscripts older than the Latin Vulgate of Jerome (c. AD 340–420), the only translation authorized by the Roman Catholic Church.

Tyndale made his purpose known to the Bishop of London at the time, Cuthbert Tunstall, but was refused permission to produce this "heretical" text. Thwarted in England, Tyndale moved to the continent. A partial edition was put into print in 1525 in Cologne. But before the work could be completed, Tyndale was betrayed to the authorities and forced to flee to Worms, where the first complete edition of his New Testament was published in 1526.

Two revised versions were later published in 1534 and 1536, both personally revised by Tyndale himself. After his death in 1536 Tyndale’s works were revised and reprinted numerous times and are reflected in more modern versions of the Bible, including, perhaps most famously, the King James Bible.

Tyndale used a number of sources when carrying out his translations of both the New and Old Testaments. When translating the New Testament, he referred to the third edition (1522) of Erasmus's Greek New Testament, often referred to as the Received Text. Tyndale also used Erasmus' Latin New Testament, as well as Luther's German version and the Vulgate.

Scholars believe that Tyndale stayed away from using Wycliffe's Bible as a source because he did not want his English to reflect that which was used prior to the Renaissance. The sources Tyndale used for his translation of the Pentateuch however are not known for sure. Scholars believe that Tyndale used either the Hebrew Pentateuch or the Polyglot Bible, and may have referred to the Septuagint. It is suspected that his other Old Testament works were translated directly from a copy of the Hebrew Bible. He also made use of Greek and Hebrew grammars.

Reaction of the Catholic Church and execution

The Tyndale Bible on display at the Bodleian Library, Oxford

Tyndale’s translations were condemned in England, where his work was banned and copies burned. Catholic officials, prominently Thomas More, charged that he had purposely mistranslated the ancient texts in order to promote anti-clericalism and heretical views, In particular they cited the terms "church", "priest", "do penance" and "charity", which became in the Tyndale translation "congregation", "senior" (changed to "elder" in the revised edition of 1534), "repent" and "love", challenging key doctrines of the Roman Catholic Church.

Betrayed to church officials in 1536, he was defrocked in an elaborate public ceremony and turned over to the civil authorities to be strangled to death and burned at the stake. His last words are said to have been, "Lord! Open the King of England's eyes."

Tyndale's translation of the Bible had notes critical of the Roman Catholic Church. In addition, Tyndale's prologue to the New Testament printed in Cologne followed Luther's rejection of Hebrews, James, Jude and Revelation as God's Word. Even though this prologue was omitted later, Tyndale and other Protestants followed Luther and removed these four books from their traditional place and put them at the end until the Great Bible which reverted to the traditional order

Some radical reformers[who?] preached that the true church was the "invisible" church, that the church is wherever true Christians meet together to preach the word of God. To these reformers,[who?] the Catholic Church was unnecessary and its very existence proved that it was in fact not the "true" Church. When Tyndale determined that the Greek word ἐκκλησία (ekklesia) was more accurately translated congregation, he was intentionally undermining the entire structure of the Catholic Church.

Many of the reform movements[which?] believed in the authority of scripture alone. To them it dictated how a "true" church should be organized and administered. By changing the translation from church to congregation Tyndale was providing ammunition for the beliefs of the reformers. Their[whose?] belief that the church was not a visible systematized institution but a body defined by believers, however organized, who held a specifically Protestant understanding of the Gospel and salvation was now to be found directly in Tyndale's translation of Scripture.

Tyndale's use of the word congregation conflicted with the Catholic Church's doctrine that the lay members and the clergy were two separate classes within the Church, and the Catholic teaching of the Sacrament of Ordination. If the true church is defined as a congregation, the common believers, then the Catholic Church’s claim that the clergy were of a consecrated order different than the average Christian and that they had different functions within the Church no longer held sway.

Tyndale's translation of the Greek word πρεσβύτερος (presbuteros) to mean elder instead of priest also challenged the doctrines of the Catholic Church. In particular, it undermined the Catholic Mass and its nature as a sacrifice.

The role of the priest in the Catholic Church was to offer the sacrifice of Christ's body and blood in the ritual of the Mass, to bless, to conduct other religious ceremonies, to read and explain the scripture to the people, and to administer the other sacraments. In these ways they are different from the common believers. In many reform movements a group of elders would lead the church and take the place of the Catholic priests. These elders were not a separate class from the common believers; in fact, they were usually selected from amongst them.

Many reformers believed in the idea of the priesthood of all believers, which meant that every Christian was in fact a priest and had, for example, the right to read and interpret scripture. Tyndale's translation challenged the claim of scriptural basis for Catholic clerical authority.

Catholic doctrine was also challenged by Tyndale’s translation of the Greek μετανοεῖτε (metanoeite) as repent instead of do penance. This translation conflicted with the Catholic Sacrament of Confession. Tyndale's translation of scripture backed up the views of reformers like Luther who had taken issue with the Catholic practice of sacramental penance. Tyndale believed that it was through faith alone that a person was saved. Christ had, by the giving of the Holy Spirit, given the power to forgive sins to his disciples in John 20:20-23.

Tyndale's position on Christian salvation differed from the views of the Catholic Church, which followed the belief that salvation was granted to those who lived according to Catholic doctrine and thus participated in the Church's seven Sacraments. Tyndale’s translation challenged the belief that a person had to do penance for his or her sins to be forgiven by God. According to Tyndale’s New Testament translation and other Protestant reformers,[who?] all a believer had to do was repent with a sincere heart, and God would forgive.

Tyndale's translation of the Bible also challenged the Catholic Church in many other ways. For example, Tyndale's translation of the Bible into a vernacular language made it available to the common English-speaking person. Tyndale wanted everyone to have access to scripture and gave the common people the ability to read it for themselves, but with a decidedly Protestant orientation in the choice of words used and in its annotations, which were suffused with Tyndale's Protestant beliefs.

The greatest challenge that Tyndale's Bible caused the Catholic Church is best summed up by Tyndale, himself, when he gave one of his primary reasons for translating the Bible. Tyndale’s most well-known purpose was to "[cause a boy that driveth the plough to know more scripture] than the clergy of the day", many of which were poorly educated. By this, Tyndale sought to undermine the Catholic Church's grip on both the access to and interpretation of scripture. To Tyndale, a Roman Catholic priesthood was not needed as an intermediary between a person and God.

Tyndale's Bible laid the foundations for many of the English Bibles which followed his. His work made up a significant portion of the Great Bible which was the first authorized version of the English Bible. The Tyndale Bible also played a key role in spreading reformation ideas to England which had been reluctant to embrace the movement. By including many of Martin Luther's commentaries in his works, Tyndale also allowed the people of England direct access to the words and ideas of Luther, whose works had been banned in England.

Perhaps the Tyndale Bible's greatest impact is that it heavily influenced and contributed to the creation of the King James Version, which is one of the most popular and widely used Bibles in the world today. It has been suggested that around 90% of the King James Version (or at least of the parts translated by Tyndale) is from Tyndale's works, with as much as one third of the text being word for word Tyndale. Many of the popular phrases and Bible verses that people quote today are in the language of Tyndale. An example of this is Matthew 5:9 "Blessed are the peacemakers."

The importance of the Tyndale Bible in shaping and influencing the English language has been mentioned. According to one writer, Tyndale is "the man who more than Shakespeare even or Bunyan has moulded and enriched our language."

Tyndale used ester for paskha (πάσχα) in his New Testament, where Wycliffe had used pask. When Tyndale embarked on his Old Testament translation, he realised that the anachronism of ester could not be sustained; and so coined the neologism, passover; which later Bible versions adopted, and substituted for ester in the New Testament as well. Its remnant is seen as Easter once in the King James Version in Acts 12:4 and twice in the Bishops' Bible, John 11:55 as well as Acts 12:4.