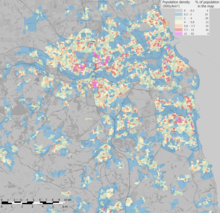 Tyne and Wear (/ˌtaɪn  ... ˈwɪər/) is a metropolitan county in North East England, situated around the mouths of the rivers Tyne and Wear. It came into existence in 1974 after the passage of the Local Government Act 1972. It consists of the five metropolitan boroughs of Newcastle upon Tyne, Gateshead, North Tyneside, South Tyneside and the City of Sunderland. The county is bordered to the north by Northumberland, to the south by County Durham and to the east of the county lies the North Sea. It is the smallest county in North East England by area, but by far the largest in terms of population.

Prior to the 1974 reforms, the territory now covered by the county of Tyne and Wear straddled the border between the counties of Northumberland and Durham, the border being marked by the river Tyne; that territory also included five county boroughs.

The report of the Royal Commission, published in 1937, recommended the establishment of a Regional Council for Northumberland and Tyneside (to be called the "Northumberland Regional Council") to administer services that needed to be exercised over a wide area, with a second tier of smaller units for other local-government purposes. The second-tier units would form by amalgamating the various existing boroughs and districts. The county boroughs in the area would lose their status. Within this area, a single municipality would be formed covering the four county boroughs of Newcastle, Gateshead, Tynemouth, South Shields and other urban districts and boroughs.

A minority report proposed amalgamation of Newcastle, Gateshead, Wallsend, Jarrow, Felling, Gosforth, Hebburn and Newburn into a single "county borough of Newcastle-on-Tyneside". The 1937 proposals never came into operation: local authorities could not agree on a scheme and the legislation of the time did not allow central government to compel one.

Tyneside (excluding Sunderland) was a Special Review Area under the Local Government Act 1958. The Local Government Commission for England came back with a recommendation to create a new county of Tyneside based on the review area, divided into four separate boroughs. This was not implemented. The Redcliffe-Maud Report proposed a Tyneside unitary authority, again excluding Sunderland, which would have set up a separate East Durham unitary authority.

The White Paper that led to the Local Government Act 1972 proposed as "area 2" a metropolitan county including Newcastle and Sunderland, extending as far south down the coast as Seaham and Easington, and bordering "area 4" (which would become Tees Valley). The Bill as presented in November 1971 pruned back the southern edge of the area, and gave it the name "Tyneside". The name "Tyneside" proved controversial on Wearside, and a government amendment changed the name to "Tyne and Wear" at the request of Sunderland County Borough Council.

Although Tyne and Wear County Council was abolished in 1986, several joint bodies exist to run certain services on a county-wide basis. Most notable is the Tyne and Wear Passenger Transport Authority, which co-ordinates transport policy. Through its passenger transport executive, known as Nexus, it owns and operates the Tyne and Wear Metro light rail system, and the Shields ferry service and the Tyne Tunnel, linking communities on either side of the River Tyne. Also through Nexus, the authority subsidises socially necessary transport services (including taxis) and operates a concessionary fares scheme for the elderly and disabled. Nexus has been an executive body of the North East Joint Transport Committee since November 2018.

There have been occasional calls for Tyne and Wear to be abolished and the traditional border between Northumberland and County Durham to be restored.

Tyne and Wear either has or closely borders two official Met Office stations, neither located in one of the major urban centres. The locations for those are in marine Tynemouth where Tyne meets the North Sea east of Newcastle and inland Durham in County Durham around 20 kilometres (12 mi) south-west of Sunderland. There are some clear differences between the stations temperature and precipitation patterns even though both have a cool-summer and mild-winter oceanic climate.

Tyne and Wear contains green belt interspersed throughout the county, mainly on the fringes of the Tyneside/Wearside conurbation. There is also an inter-urban line of belt helping to keep the districts of South Tyneside, Gateshead, and Sunderland separated. It was first drawn up from the 1950s. All the county's districts contain some portion of belt.

See also: List of Parliamentary constituencies in Tyne and Wear

At the level of local government, all of the region's five unitary authorities were controlled by Labour in 2019.

Newcastle and Sunderland are known for declaring their election results early on election night. Therefore, they frequently give the first indication of nationwide trends. An example of this was at the 2016 European Union referendum. Newcastle was the first large city to declare, and 50.6% of voters voted to Remain; this proportion was far lower than predicted by experts. Sunderland declared soon after and gave a 62% vote to Leave, much higher than expected. These two results were seen as an early sign that the United Kingdom had voted to Leave.

See also: List of Tyne and Wear settlements by population

Commuter rail services in the region

Italics indicate the district centre. For a complete list of all villages, towns and cities see the list of places in Tyne and Wear.

Retrieved from "https://en.wikipedia.org/w/index.php?title=Tyne_and_Wear&oldid=1009346775"
Uses material from the Wikipedia article Tyne and Wear, released under the CC BY-SA 3.0 license.