The Wilderness Act protects exceptional undisturbed natural areas and scenery, such as in the Ansel Adams Wilderness.

The National Wilderness Preservation System (NWPS) of the United States protects federally managed wilderness areas designated for preservation in their natural condition. Activity on formally designated wilderness areas is coordinated by the National Wilderness Preservation System. Wilderness areas are managed by four federal land management agencies: the National Park Service, the U.S. Forest Service, the U.S. Fish and Wildlife Service, and the Bureau of Land Management. The term "wilderness" is defined as "an area where the earth and community of life are untrammeled by man, where man himself is a visitor who does not remain" and "an area of undeveloped Federal land retaining its primeval character and influence, without permanent improvements or human habitation, which is protected and managed so as to preserve its natural conditions." As of 2016, there are 803 designated wilderness areas, totaling 111,368,221 acres (45,069,120 ha), or about 4.5% of the area of the United States.

Acres of wilderness added by year

A dramatic spike in acreage added to the wilderness system in 1980 was due in large part to the Alaska National Interest Lands Conservation Act, signed into law by President Jimmy Carter on December 2, 1980. A smaller spike in 1984 came with the passage of many bills establishing national forest wilderness areas identified by the Forest Service's Roadless Area Review and Evaluation (RARE) process. The Bureau of Land Management was not required to review its lands for inclusion in the NWPS until after October 21, 1976, when the Federal Land Policy and Management Act of 1976 was signed into law; designation of wilderness areas on BLM lands began in 1978. Over 200 wilderness areas have been created within Bureau of Land Management administered lands since then, consisting of approximately 8.71 million acres (3,520,000 ha) in September 2015.

Main article: List of wilderness areas of the United States 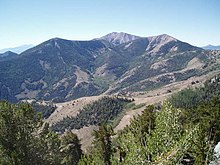 On federal lands in the United States, Congress may designate an area as wilderness under the provisions of the Wilderness Act of 1964. Multiple agencies, including the Bureau of Land Management, the National Park Service, the Fish and Wildlife Service, and the U.S. Forest Service, are responsible for the submission of new areas that fit the criteria to become wilderness to Congress. Congress then reviews these cases on a state by state basis and determines which areas and how much land in each area will become part of the WPS. There have been multiple occasions in which Congress designated more federal land than had been recommended by the nominating agency. Whereas the Wilderness Act stipulated that a wilderness area must be "administered for the use and enjoyment of the American people in such a manner as will leave them unimpaired for future use and enjoyment as wilderness", the Eastern Wilderness Areas Act of 1975, which added 16 national forest areas to the NWPS, allowed for the inclusion of areas that had been severely modified by human interference.

The Wilderness Act provides criteria for lands being considered for wilderness designation. Though there are some exceptions, the following conditions must be present for an area to be included in the NWPS: (1) the land is under federal ownership and management, (2) the area consists of at least five thousand acres of land, (3) human influence is "substantially unnoticeable," (4) there are opportunities for solitude and recreation, and (5) the area possesses "ecological, geological, or other features of scientific, educational, scenic, or historical value."

Wilderness areas are subject to specific management restrictions; human activities are limited to non-motorized recreation (such as backpacking, camping, hunting, fishing, horseback riding, etc.), scientific research, and other non-invasive activities. During these activities, patrons are asked to abide by the Leave No Trace policy. This policy sets guidelines for using the wilderness responsibly, and leaving the area as it was before usage. These guidelines include: Packing all trash out of the wilderness, using a stove as opposed to a fire, camping at least 200 feet (61 m) from trails or water sources, staying on marked trails, and keeping group size small. When closely observed, the Leave No Trace ethos ensures that wilderness areas remain untainted by human interaction. In general, the law prohibits logging, mining, motorized or mechanized vehicles (including bicycles), road-building, and other forms of development in wilderness areas, though pre-existing mining claims and grazing ranges are permitted through grandfather clauses in the Wilderness Act. Wilderness areas fall into IUCN protected area management category Ia (strict nature preserves) or Ib (wilderness areas).

A special exemption to the rule against mechanized equipment is made for wilderness areas in Alaska: limited use of motorized vehicles and construction of cabins and aquaculture are permitted. These exemptions were allowed due to the large amount of wilderness in Alaska and the concerns of subsistence users, including Alaska Natives.

Wilderness areas are parts of national parks, wildlife refuges, national forests, and BLM lands; some units are managed by different agencies. Initially, the NWPS included 34 areas protecting 9.1 million acres (37,000 km2) in the national forests. As of 2019, there are 803 areas in the NWPS, preserving 111,368,221 acres (45,069,120 ha). This is approximately 4.5% of the entire United States, though only about 2.7% of the 48 contiguous states. However, most of that acreage is located in a handful of states. The states with the highest number of wildernesses are California, Arizona, Nevada, Alaska, and Oregon. However, when measured in acres the list changes dramatically, as Alaska contains many of the largest areas protected under the act. In terms of total acres, Alaska, California, Arizona, Idaho, and Washington are the top five states for wilderness, containing almost 80 percent of the acreage in the system. Wilderness totals in most eastern states are modest, with the exceptions of Florida and Minnesota. Wilderness areas exist in every state except Connecticut, Delaware, Iowa, Kansas, Maryland, and Rhode Island. 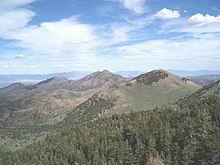 Most U.S. wilderness areas are in national forests, but the largest amount of wilderness land is administered by the National Park Service. The largest contiguous wilderness complex in the United States is the Noatak and Gates of the Arctic Wildernesses in Alaska at 12,743,329 acres (5,157,042 ha). The largest wilderness area outside Alaska is the Death Valley Wilderness in southeastern California. The smallest area protected by the WPS is the Pelican Island Wilderness in northern Florida, which measures just 6 acres (2.4 ha) total. The smallest area preserved in the system was formerly the Rocks and Islands Wilderness in Northern California at 5 acres (2.0 ha), but after a reassessment by the Bureau of Land Management in 2006 it was officially expanded to 19 acres (7.7 ha).

On November 7, 2009, an agreement between the United States, Canada, and Mexico entitled the "Memorandum of Understanding on Cooperation for Wilderness Conservation" was made. This agreement created a new entity, the North American Intergovernmental Committee on Cooperation for Wilderness and Protected Areas Conservation, that would streamline the process for open communication between international agencies for the purpose of wilderness preservation. This committee was formed to gain insight on the benefits of wilderness preservation, establish open channels of communication between international agencies, and examine the cultural differences and similarities behind preservation efforts in each country. Within the U.S. system, all of the agencies responsible for wilderness preservation will work in cooperation with their international counterparts to determine the future of both the U.S. system and North American preservation efforts as a whole.

Amphibians, like this newt in the Cohutta Wilderness of North Georgia, are among the many types of fauna protected by the NWPS.

One of the major goals of the Wilderness Preservation System is to provide undeveloped habitats for threatened or endangered species. Many of the species found in the United States are represented in wilderness areas. There are 261 basic ecosystems in the U.S., and 157 of them are represented in the system. With 60% of all ecosystems somewhat protected by the NWPS, much of the wildlife in the U.S. also has an area in which to exist without significant human interaction.

In late 2011, a full wilderness review was requested of the Arctic Refuge Coastal Plain in Alaska. One of the major qualifications for this area to be considered as a possible wilderness area was its diverse wildlife population, many of which are on the endangered species list. In this potential wilderness area alone, whales, seals, wolves, polar bears, grizzly bears, muskoxen, caribou, and over 200 species of migratory birds call this one area home for at least part of the year. This vast assortment of flora and fauna is a major consideration for addition into the wilderness preservation system.

Thousands of laws and policies have helped shape and manage the National Wilderness Preservation System in the United States. The following Acts of Congress either directly affect the wilderness system or help influence wilderness management. 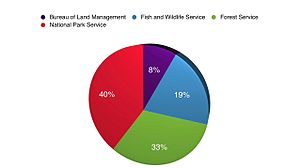 Share of area managed by each agency as of 2012

Established in 1916, this agency helps protect more than 400 national park units. They also aid local tribes and governments, as well as non-profit organizations and businesses, by preserving local history and revitalizing communities.

Established in 1905, this agency manages public lands in national forests or grasslands, which encompasses about 193 million acres (780,000 km2) of land.

Established in 1940, this agency manages 150 million acres (610,000 km2) of the National Wildlife Refuge System, as well as thousands of small wetlands and other special land areas. Some of their contributions include protecting and conserving endangered species and their wildlife habitats and enforcing federal wildlife laws.

Established in 1812 as the General Land Office and later combined with the Grazing Service to become the Bureau of Land Management in 1946, this agency manages 247 million acres of public land. This agency's National Landscape Conservation System (NLCS) includes over 886 federally recognized areas and more than 27 million acres (110,000 km2) of land in the U.S. They aim to protect wilderness areas, as well as wild and scenic rivers, national monuments, and historic trails. It safeguards cultural sites and many Indian preserves of the western states. The mission of the NLCS is to "conserve, protect, and restore these nationally significant landscapes that are recognized for their outstanding cultural, ecological, and scientific values."

Some state and tribal governments also designate wilderness areas under their own authority and local laws. These are not federal areas, and the exact nature of protection may differ from federal laws. Some U.S. states have created wilderness preservation programs modeled on the NWPS.