Not to be confused with University of Northern Iowa.

Upper Iowa University (UIU) is a private university in Fayette, Iowa. It enrolls around 900 students and offers distance education programs that include 15 centers in the U.S., an online program, an independent study program, and centers in Hong Kong, Singapore and Malaysia. UIU has a total student enrollment of more than 6,000 students with a 24:1 student-to-faculty ratio (based on university-wide enrollment).

Upper Iowa offers undergraduate and graduate degree programs in more than 40 majors, including art, business, conservation management, education, higher education administration, human services, information technology, liberal arts, math, nursing, psychology, science, and more. It operates on two eight-week terms per semester, allowing students to take two classes per term. Although accredited by the Higher Learning Commission, the university was placed on "on notice" in March 2017 "after staff members at one of its locations for years mishandled academic and financial aid information."

UIU is the only NCAA Division II Athletics Program in the state of Iowa and a member of the Northern Sun Intercollegiate Conference (NSIC).

Alexander-Dickman Hall, built in 1855, is the oldest building on the Fayette Campus and constructed of native limestone.

In 1854, Elizabeth Alexander, a pioneer living near what is now Fayette, Iowa, proposed the idea of a college to her husband, Robert, who donated $10,000 toward the cause. Their son-in-law, Samuel Robertson, donated $5,000 and 10 acres (40,000 m2) of land. In 1856, the first Board of Trustees meeting was held; articles of Incorporation were adopted; and classes began January 7, 1857.[clarification needed] The university was affiliated with the Methodist Church until 1928.

In 1861, a company of male students and faculty members enlisted in the Army to fight in the American Civil War. Student-soldiers participated in 17 major battles, carrying a flag hand-sewn by UIU women students. In 1917, UIU male students joined the armed forces during World War I, while women students organized American Red Cross classes on campus; the UIU gym became a barracks, and the athletic field was the scene of military drills. By 1920, a systematic program of extension work throughout northeast Iowa had begun, with Upper Iowa referred to as "a pioneer in the field." Those students who joined the service to fight in World War II took advantage of the G.I. Bill to complete their education, which dramatically increased Upper Iowa enrollment between 1947 and 1950. Record enrollments were also seen after the Vietnam War (1952–1970).

In 1972, Upper Iowa launched an external degree program that included Independent Study and Online Programs. In 1984 to present, UIU expanded to open locations across the U.S. Upper Iowa was approved by the Higher Learning Commission to offer graduate degrees in 1995, and in 1999 started its International Program by establishing centers in Hong Kong, Singapore, Malaysia, and Vancouver, British Columbia, Canada. 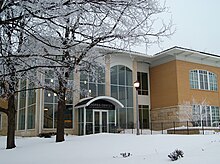 The Andres Center for Business and Education was built in 2004

It was also during 1994 to 2003 that UIU underwent an aggressive landscaping and building renovation that brought changes to its Fayette campus. This included the construction of Lee Tower Residence Halls, the acquisition of a new physical plant building and the construction of a recreation center. In 2004, the new Andres Center for Business and Education was built, and Alan G. Walker was appointed the 20th president of the University. During summer 2009, the largest capital improvement project broke ground on the Fayette campus — $75 million — which will include a new student center, suite-style housing, and a Liberal Arts academic building.

Upper Iowa's traditional 100-acre (0.40 km2) residential campus is in Fayette, Iowa. Fayette County is ranked at 26th in the Midwest list of “Best Places to Live.” Student-faculty ratio is 14:1; teaching is by tenured or full-time faculty of whom nearly 75 percent have doctorate degrees; advising is done by faculty; there are free on-campus tutor centers; and there are more than 40 registered fraternities, sororities, clubs and organizations on campus.

The Fayette campus is primarily for undergraduate students, but a master's degree in education is also offered, along with two-week IXEL classes in the summer. Students can choose from 40 majors, with the most popular being Elementary Education and Teaching, Marketing/Marketing Management, General, and Natural Resources/Conservation. The Pleggenkuhle Prairie, donated by the Pleggenkuhle family to UIU, is 3 acres (12,000 m2) of virgin prairie northwest of Hawkeye. It is used as a teaching tool for students to learn about the prairie ecosystem and to conduct prescribed burns and research projects at the site.

The academic facilities on the Fayette campus are state-of-the-art due to an aggressive renovation of the old buildings over the past decade and new construction currently underway. The Fayette campus has free wireless Internet access. The recreational facilities include free student events, a free fitness center, and free golf at the local 18-hole course. The university has rock wall climbing and specially designed ropes course.

Upper Iowa University awards more than $100,000 each year in merit-based scholarships to its current students.

Upper Iowa University has two international education centers located in the Pacific Rim. UIU offers undergraduate programs in business, communication and psychology to learners in Hong Kong and Malaysia. Through on-site faculty, faculty exchange, and visiting lecturers, UIU offers a program with a high level of academic rigor and quality. 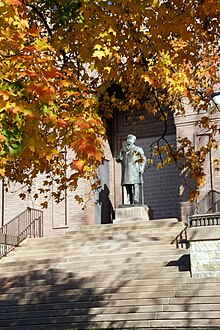 The statue of Colonel David B. Henderson stands in front of the Upper Iowa University library. Andrew Carnegie donated $25,000 to the University to honor his friend.